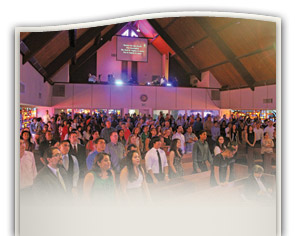 BY ASHLEY BATISTEThe lion in the jungle and the fish in the sea have one thing in common—they’re in their natural environments. The lion roams comfortably in the jungle, and the fish swims freely in the sea. Both enjoy the environment to which they’re accustomed. What happens, though, if they’re forced out of that comfortable environment? The fish would die if taken out of the water, and the lion would probably feel out of place and unsure of its surroundings.

Many Adventist students graduating from Seventh-day Adventist colleges and universities also struggle to transition to different environments, including secular workplaces. After four years of chapels, worships, mission trips, prayer in classrooms, and being surrounded by a community that observes the Sabbath and understands the church’s health message, many graduates moving on to secular graduate schools or work environments are noticing the striking contrast.

Romans 12:2 says, “Do not conform to the pattern of this world”—and that is precisely where the struggle occurs. How do recent graduates who spent four or more years in Adventist colleges and universities learn to be in the world, but not of it? Having been in an Adventist community for so long, graduates are not as accustomed to the secular world as some might think. Of course, time is spent outside of campus, but when you’re part of an Adventist community some things become commonplace, such as easy access to veggie meat, no school meetings scheduled on Sabbath, and no one typically questioning your faith.

So what are the experiences of some college graduates who seem to feel like a fish out of water or a lion out of the jungle? How do they adjust to this sometimes scary transition period? Recent graduates of Oakwood and Walla Walla universities share their experiences.

Noting the Difference
Oakwood graduate Monique Jolicia-Johnson, currently a registered nurse at the Methodist Hospital of Indianapolis, found that the most notable differences she met while transitioning were the people and the food.

“I love the health message,” Jolicia-Johnson says. “I’m a vegetarian, and the hospital cafeteria serves a very limited amount of vegetarian food. It’s also hard to have a healthy social life. Many of the people like to go out and drink and party for fun, things I don’t want to do. I’m always really bored when I’m not at work.”

Jolicia-Johnson has found it easy being open about her faith. When asked which nursing school she went to, she proudly says, “Oakwood University in Huntsville, Alabama,” which always leads to talking more about her Seventh-day Adventist faith.

Fellow Oakwood graduate Jeffery Pascal, who now attends Meharry Medical College School of Dentistry in Nashville, Tennessee, is noticing many differences as he transitions. No prayer is said before class begins, and teachers are cautious with their choice of words. Being used to professors relating how science always points back to God, he now realizes more fully the need to have a personal relationship with Christ.

Pascal looks forward to resting on the Sabbath and opts out of staying late in labs on Friday nights. He also realizes the opportunities he has to share Bible truths about the Sabbath with his friends and fellow classmates.

“I am a fisherman of souls, and I try to throw bait into my conversations with classmates on spiritual things,” Pascal says. “If they bite, then I continue speaking about my faith. If they are interested and want to hear more, my goal is to try to have Bible studies with them and eventually invite them to church.”

Kelsea Correia, a 2010 graduate of Walla Walla University and a current teaching associate and graduate student at California State University, Fresno, says one of the first differences she noticed was that instead of seeing uplifting phrases, poems, or verses written on bathroom stalls, she finds alcohol and sex-safety tips. Also, rather than numerous Bible studies going on around campus, she now sees people studying the Bible together only occasionally.

“I do miss the environment where students would just stop and pray for each other on campus,” Correia says. “After a special weekend speaker or a Week of Prayer, the Adventist campus would always be the most uplifting place. If anyone was struggling, there was always a friend nearby to pray with or guide them. It’s also strange not seeing my classmates at church or planning Sabbath outings with them. It has definitely been a different experience.”

Being employed by the same school she attends, Correia can’t be open about her faith with her undergraduate students. In some instances, though, her students have asked her questions such as which church she attends. When these inquiries occur, Correia is open about her faith but very careful not to be pushy or preachy. With her graduate classmates she is very open about her beliefs and faith, and sometimes engages them in conversation.

The Local Church’s Role
So what should our local churches be doing to help guide this group of Adventist college graduates through such transitions? Are there currently any ministries in your home church that would target not only these young adults but college students in general? Usually there are plenty of programs and ministries for children, teens, and tweens, but churches that are not in close proximity to Adventist colleges and universities often lack ministries geared for this age group. Occasional sermons pertaining to the college/work transition, involving young adults in church ministries, and simply being a loving church family reinforce the bond that graduates form with the church.

Is that enough, though? What about those individuals who need to be connected with other recent graduates, as well as involved in activities designed for their age group? Jolicia-Johnson knows what it feels like not to have that type of church support group.

“The churches where I am don’t do much for me, and haven’t helped much with my transition at all,” she says. “Prayer and encouragement by friends and family have helped. I would suggest that churches have more social and spiritual programs for my age group to help us college grads transition.”

A Thriving Ministry
Some local Adventist churches, such as Garden Grove Adventist Church in California, have up-and-running ministries for young adults. Garden Grove’s young-adult ministry focuses on those aged 18-35 and seeks to live its mission “to retain, reclaim, recruit, and recharge this generation for Christ.” After realizing that some prefer a less traditional church service geared specifically for young adults, “the Sanctuary” was formed. With total support from the senior pastoral staff, the Sanctuary, a 9:30 a.m. contemporary worship service that convenes in the sanctuary, was started. Following the church service is a 10-minute “party,” which gives young adults the opportunity to eat snacks, get to know other people, and sign up for various ministries and what they call “Prayer Experience” for those who want to spend time with God in prayer. Then comes “Sanctuary Study,” a Sabbath school for young adults in which “tough questions” can be freely discussed. 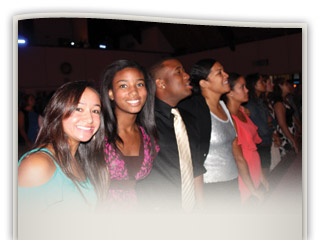 PRAISING GOD TOGETHER: Young adults enjoy worshipping God together at the Sanctuary service.

Garden Grove’s young-adult ministry doesn’t end with just worship and study on Sabbath mornings. Throughout the week small groups created specifically to equip young adults to be leaders meet in homes and restaurants. This is a way to build relationships with young adults who might not feel comfortable attending Sabbath worship services but are interested in discussion and dialogue. Currently in the works is an on-campus ministry or small group designed specifically for students at the local secular university, California State University, Fullerton.

Coupled with Sanctuary Study and small groups, every other month the Sanctuary holds a sports night at the local Adventist academy. Becoming involved in sports—viewed by many as a universal, nonthreatening language—is a great way for young adults to get to know one another, and also helps draw people back into the church.

Take That Step
Churches that haven’t developed a thriving young-adult ministry that incorporates prayer as well as spiritual and social support should consider doing so. With careful thought and planning, it is possible to develop these types of vital programs. Graduating from college is the beginning of a brand-new journey—one that is exciting yet unfamiliar and daunting. It’s a time when life quickly changes, and adjustments must be made. When there seems to be no one who can relate to what young adults are going through in their new environment, the struggles appear amplified.

Recent Adventist college and university graduates are on fire for the Lord, and ready and willing to be witnesses in their new secular environments. There’s no telling the dramatic difference that more church ministries geared toward young adults during a time of transition will make in their lives.