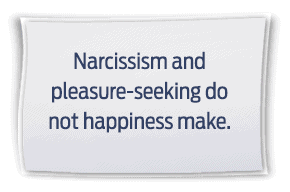 After the fall’s super storms, the overzealous politicians and pundits, the fear of economic collapse, and fantasies of a world without war, our “pursuit” in the new year will be for “happiness.”

Not only is it in the United States Declaration of Independence—it’s been the desperate desire of every person since the fall of humanity. It’s also evident in visual and print advertisements, where commercials persuade consumers that if we preserve our youth, follow our diets, get rich and have the right job, wear the right designer clothes, perfume our bodies and homes, drive their cars, we will be deliriously happy.

They’ve convinced many of us, as is apparent in the billion-dollar industries of cosmetics, home improvement projects, gadgets, and extreme makeovers. Yet despite these devices, at the end of the day Americans are still tired, fat, fearful, and miserable. So what exactly is this illusive experience called “happiness”?

Narcissism and pleasure-seeking do not happiness make.1 Despite pressures and propaganda to get rich quickly, money doesn’t make us whole or happy. True happiness comes from Christ. Happiness was so important to Him during His earthly ministry that of all the words He used repeatedly, “happiness” tops the list. He used it nine times in the Sermon on the Mount (Matt. 5:3-12), and four in the Sermon on the Plain (Luke 6:20-22). Instead of using the word “blessed” in these two timeless sermons, Jesus deliberately chose the word “happy” (Greek makarioi, which originally meant “rich”) to convey and extol the eternal riches of inner peace derived from obedience, and the blessings enjoyed by believers in Him.

Jesus also offered happiness as an effectual cure for every human hurt and woe caused by sin. He permanently placed the word and its variety of meanings in the fertile environment of virtues such as faith, hope, joy, and love.

This lesson left a lasting impression on the disciples, especially John the beloved and author of Revelation. John introduced the letters to the seven churches by saying, “Happy is he who is reading, and those hearing, the words of the prophecy, and keeping the things written in it—for the time is nigh” Rev. 1:3, YLT).2 He also underscored happiness in six other beatitudes (Rev. 14:13; 16:15; 19:9; 20:6; 22:7, 14).

The apostle Paul used “happy” (Rom. 4:7, 8; 14:22) to express his understanding that its opposite isn’t sadness, but sin, the fountainhead of all misery, mental illness, disease, social and political deprivation, and division.

Ellen White wrote: “The religion of Christ does not obliterate or even weaken a single faculty. It in no way incapacitates you for the enjoyment of any real happiness; it is not designed to lessen your interest in life, or to make you indifferent to the claims of friends and society. It does not mantle the life in sackcloth; it is not expressed in deep-drawn sighs and groans. No, no; those who in everything make God first and last and best, are the happiest people in the world.”3

Especially during a difficult year, we can, at times, be overwhelmed by feelings of hopelessness. Struggles that one preacher described as “those demoralizing seasons of dark depression” and “discouraging feelings that refuse to go away,” can suck us into the abyss of despair. If and when they come, remember that our inheritance is happiness from none other than Jesus Christ. “Seek first his kingdom and his righteousness” (Matt. 6:33), and all we imagine that makes life happy will be added unto us.

Let’s also use our time wisely in the new year. Humans tend to be unhappy when they are convinced that their busy lives prevent them from accomplishing important things. Unhappiness is also bred by the realization of how fast time passes; and that confuses work, mars life, and makes feverish the postponing of tasks and duties that ought to be done today (Matt. 6:25-34).

Remember, Jesus called only busy people to be His disciples. So don’t worry, be happy!

__________
Hyveth Williams is a professor of homiletics at the Seventh-day Adventist Theological Seminary. This article was published December 20, 2012.