Searching the Face of God 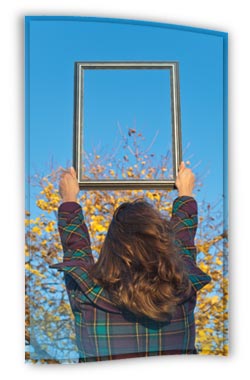 BY YOUNIS S. MASIH
The face is one of the most visible and important parts of the human body and communicates a lot about a person. Sometimes by gazing at a person’s face we can see inner struggles or sheer joy. A frown may indicate dislike or disapproval, while a smile may imply delight or happiness. In fact, our capacity to judge facial expressions can assist us to interpret and predict the probable reaction of a person. “The face is an ever-changing billboard signaling our own attitudes and reactions. In turn, we read the faces of others. The face contains most of the clues we seek as to the mental state of another person. Much of what we know about others we learn from their faces before they even speak. It offers no surprise, then, that in the Bible the face is often described as indicating emotions and attitudes.”1

Considering all this, I have often wondered about the face of God. Does His face have a story to tell us? If a human face is so important and tells a lot about one’s character, what about God’s face? Does His face reveal a bit more about Him?

The P?nîm of God
In the Old Testament the word p?nîm is the primary vocabulary for face. In its various forms the word p?nîm occurs more than 2,000 times. The word occurs only as a grammatical plural form, a fact that specialists in Hebrew grammar often explain as referring to the plurality of features that make up a face. It can refer to the face of a human, God, an animal, and inanimate objects, such as the earth and water. There are a few other Hebrew terms that are translated as face; however, no other word expresses the range of emotions that could be communicated by the term p?nîm.2

P?nîm frequently appears in the Old Testament in combination with the name of God or the Lord. When mentioned in reference to God, the face can imply a range of ideas. For example, the face can equate God’s power, His presence and actions, and at times, p?nîm can also be the object of human hope.

God’s Face Equates His Power and Presence
An important text that indicates God’s power and presence can be found in Exodus 33:15, 16: “Then Moses said to him, ‘If your Presence does not go with us, do not send us up from here. How will anyone know that you are pleased with me and with your people unless you go with us? What else will distinguish me and your people from all the other people on the face of the earth?’ ”

The narrative appears in the context of the Lord’s invitation to Moses to meet Him on Mount Sinai. God summoned His servant primarily to hand over the tablets of stone on which He had written the Ten Commandments. Moses stayed on the mountain for 40 days and nights. Because of a delay in returning, the Israelites grew restless, and in his absence they abandoned Yahweh, the God of heaven and earth, and began to worship a golden calf. The Lord told Moses to go down to the people because they were dancing and worshipping another god.  When Moses returned from the mountain with the two tablets of the testimony in his hands, he saw Israelites worshipping the golden calf and broke the tablets. He took the golden calf, burned it in the fire, ground it to powder, scattered it on water, and made the Israelites drink it.

Moses and the people beseeched God for forgiveness, but God said to Moses: “Go up to the land flowing with milk and honey. But I will not go with you, because you are a stiff-necked people and I might destroy you on the way” (Ex. 33:3). Nonetheless, Moses pleaded  that they could not continue any further unless God would forgive the Israelites. Besides, His divine presence needed to go with them. The Hebrew word translated as “presence” in verses 15, 16 is p?nîm. Literally, Moses was requesting God’s face to go with them. The Israelites, because of their disobedience, had “lost face” before God, yet Moses pleaded for the face of God to go with them. He rightly understood that their identity was not in their victories and what they owned or would own, but in whom they worshipped (verse 16). Moses pleaded for God’s presence, and was not prepared to accept anything less (see also Isa. 63:9; Lam. 4:16).

Deuteronomy 4:37, 38 is another passage that employs p?nîm to draw attention to a different element of God’s character. “Because he loved your ancestors and chose their descendants after them, he brought you out of Egypt by his Presence and his great strength, to drive out before you nations greater and stronger than you and to bring you into their land to give it to you for your inheritance, as it is today.”

The Israelites had wandered in the wilderness for 40 years and were about to enter into the Promised Land. However, before they could, the aged leader, Moses, once again reminded them about the historical facts that had marked the Exodus experience. He noted that it was God’s love and election, as well as His presence and strength that had saved Israel from their Egyptian captivity. The words presence (p?nîm) and strength in verse 37 stand in a synonymous parallelism.

A synonymous parallelism is a poetic device by which an author expresses the same idea in a different way in order to emphasize the central message of the text. Moses patiently outlined before Israel that it was divine power that had made their journey possible. Hence, p?nîm in verse 37 signifies the strength of God. God’s p?nîm had upheld the Israelites in their weakness, and His p?nîm had accompanied them throughout their journey.

God’s Face Marks Divine Action
In Leviticus 20:3 Moses records God’s address to the Israelites against the sin of child sacrifice. God instructs Moses that if any Israelite or foreigner living among them gives their child to Molech, that person should be put to death. The whole community was required to stone the person. It is intriguing how the biblical text describes God’s reaction to such a crime. God will set His face (p?nîm) against that person, who will also be cut off from Israel. Literally, Leviticus 20:3 reads: “And I will give my face against that man.” Actually, the face in the Hebrew text is the direct object of the action verb “give.” The same face that offers security through its presence and power can also mean decisive divine action expressing God’s hatred of sin (Lev. 20:5, 6; Eze. 15:7).

God’s Face Gives Hope
The face of God as an object of hope is appropriately illustrated in the well-known priestly blessing found in Numbers 6:23-26: “Tell Aaron and his sons, ‘This is how you are to bless the Israelites. Say to them: “The Lord bless you and keep you; the Lord make his face shine on you and be gracious to you; the Lord turn his face toward you and give you peace.” ’ ”

The passage points to Aaron and his sons as the vehicle of divine blessing. The phrases “the Lord make his face shine on you” (literally “Yahweh shine His face on you”) and “the Lord turn His face toward you” (literally “Yahweh lift up His face on you”) depict God as the source of hope. The combination of a shining face linking up to graciousness, and the direction of God’s face—namely, looking toward us—provides peace and a glimpse of God’s character.

This divine “facial” action generates blessings of peace and assurance for the ever-troubled human heart (cf. Ps. 4:6; 31:16; 44:3; 67:1; 80:3, 7, 19; 89:15; 119:135). Yet, when God hides His face, it marks divine disfavor and withdrawal of His support (Deut. 31:18; Ps. 30:7; 44:24; 104:29). Hence, the priestly blessing’s focus on the face of God can signify an emphasis on divine favor and hope for God’s people. “Theologically the blessing provides the context in which the commitments and disciplines of purity are to be understood. Each of the three clauses, in a different way, gives expression to God’s commitment to Israel—a commitment which promises earthly security, prosperity, and general well-being. That commitment is attested by the imposition of the divine name, in and through the pronunciation of the blessing.”3

The face of God marks many divine attributes: He is the one who is omnipresent and omnipotent. God’s face is also used as a metaphor to point to the only valid source of hope and providence. Just imagine what this means when we worship a God who offers His face (or hope) for the faceless (hopeless) and protects His people through His face (that is, His presence and power). Truly, God’s face can bring light and life and joy into our often gloomy existence. Looking at Him is a wonderful reminder of the power of the cross where God showed the entire world His true face.

In Other Words
The Infinite Value of One
If a man has a hundred sheep, and one of them goes astray, does he not leave the ninety-nine and go to the mountains to seek the one that is straying?