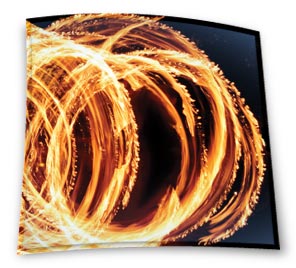 By Bernie Anderson
My college roommate and I started juggling together using those bowling-pin-shaped juggling clubs that you might see at a circus. Before long we could rhythmically pass the clubs horizontally between us while, at the same time, tossing in random stunts. We started to get pretty good, and people started asking us to perform for various events, such as local community fairs, church events, and even birthday parties. We were even able to earn some extra cash!

What we soon found out, though, is that our act could hold the audience for only about 10 minutes, and then they got that “been there, done that” distracted look on their faces. On some occasions I think I even saw a few people yawn! We quickly realized that we would have to change our act or lose the crowd. Especially when it came to the kids.

My friend and I decided to add some more daring stunts to our act. We incorporated a gymnastics two-high where I stood on my roommate’s shoulders so we could pass the clubs vertically instead of horizontally, then I dismounted with a back flip from the top
of the two-high. This certainly added something to our act, but we still felt as though something was missing. So we came up with the grand finale of our act—juggling fire. We didn’t have the cash to buy professional fire clubs, so we created our own out of wooden dowels purchased from Walmart. We wrapped shop towels around the ends of the wooden dowels, secured them with duct tape, and then let them soak in kerosene.

People loved it! They would cheer and watch on the edge of their seats. Sometimes the shop towels would go flying off the end of the dowel, and people would gasp and clap. We finally felt like we had won the crowd and left them with the sense that they had really experienced something spectacular.

How to Win the Crowd
Now, I don’t believe that the church wants to become a spectacle, but I do believe that every church has to win the crowd for the sake of the gospel! I’m convinced that in order to do that we must bring the fire! We have to remember that members as well as guests at our churches have seen it all. In America, even our nonchurched visitors probably have some sense of what a typical church is supposed to be like. So what do we do to bring the fire and win the crowd?

This was no ordinary gathering in Jerusalem, and we shouldn’t have just ordinary humdrum churches either. The truth is every church has a “juggling act,” a message, or a way of doing church. Some have more talented performers, better equipment, and even more money.

If our churches are going to be effective at a time in which there are so many churches doing so many things—and often with powerful results—we need to tap into the Holy Spirit. We need that fire. We must pray earnestly for God’s Spirit to fill every member. But it doesn’t stop there. We need to pray then for the Holy Spirit to help us take that fire and focus it into real action to impact people. I’m convinced—the thing that sets churches apart is the fire of the Spirit of God. Remember what Zechariah the prophet told Zerubabbel:  “This is the word of the Lord to Zerubbabel: ‘Not by might nor by power, but by my Spirit,’ says the Lord Almighty” (Zech. 4:6).