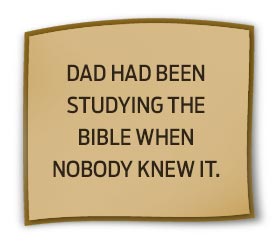 BY BEVERLY BRASS
My father was an honest, kind, and respected man. His reputation as a businessman was important to him. When Mother started attending the little Seventh-day Adventist church in town, he was a bit embarrassed. Not only was it “on the wrong side of the tracks”—he was afraid his image would be hurt if people knew his wife and children attended it.

For a short time Dad insisted that in addition to going to church on Sabbath, Mother take my sister and me and go also to a nearby Protestant church every Sunday “just so people can see you there.” He didn’t attend with us; “You take the children and go,” he said to my mother. “I don’t really need church; and besides, you can be good for both of us!” He seemed somewhat surprised when the Sunday school teacher told him one day, “Your girls know more about the Bible stories than I do!”

Years passed. Mother was faithful in her Sabbath church attendance. Dad still refused to join her. But often she’d return to the living room and notice her Bible and other religious books and magazines lying in different positions than she had left them. She wondered if he was reading them in her absence.

When I married a man who was studying for the ministry, Dad seemed pleased to have a pastor in the family. He was impressed with the students from Walla Walla College, and proud that we still attended church.
However, he still refused to attend church with us.

Where Did This Come From?
One day Dad spent a lot of time at the kitchen table. He had many papers spread around; he was obviously deep in thought. Finally he came into the living room, where we were all gathered. “I’m going to sell the store, sell the house, join the church, and move to California!”

Dad had indeed been studying the Bible when no one knew it, and he understood all the key points of our message. He had figured out how he could retire at the age of 58 by selling the store to some of his employees and still have an income. He and Mom already spent several months in southern California every winter and had friends there. Selling the house would be the bigger problem.

The next day Dad talked to the employees, and they were excited at the opportunity to own the business. Returning home, he went into his bedroom and knelt by his bed. “Lord, I’ve made arrangements to sell the store,” he prayed, “and I want to leave town and start a new life where I can serve You. I’m going to list the house for sale. Be with me as I go to a real estate agent, so that the one I choose will sell the house quickly.”

The doorbell rang while Dad was still on his knees. When he opened the door, a man he had never seen stood before him. “I’m moving to town and looking for a house,” he announced. “I was just driving down the street, and I liked the looks of yours. Is there any chance you might be willing to sell it?”