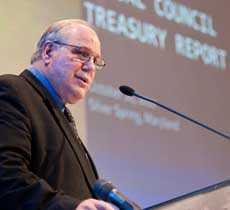 Indeed, church treasurers continue to see stable—and in many regions, growing—tithes and mission offerings. Tithe to the world church headquarters from outside North America through September totaled US$20.7 million, a 5.6 percent increase from last year. Mission offerings from the same region were up 5.4 percent, to $45.1 million.

“In spite of challenges, God’s children have continued their strong support of His work through their tithes and offerings,” General Conference treasurer Robert E. Lemon said in a report to Annual Council delegates October 16, 2012.

Historically, the Adventist Church ?has relied heavily on financial contributions from the church’s North American Division (NAD), Lemon said. The global Protestant denomination was organized in the northeast United States, and North Americans supported much of the church’s initial mission work. But in recent years a growing portion of the world church’s budget has come from tithes and offerings from outside North America.

Total income for the Adventist Church headquarters for the world budget is now split nearly 50-50, with NAD and divisions outside North America each contributing approximately half. As recently as 2006 that ratio was 66 NAD and 34 the rest.

“We have seen tremendous growth in the financial strength of our church around the world,” Lemon said. But this growing reliance on funds from outside North America makes the church increasingly vulnerable to exchange rates, he added.

For example, tithe from Brazil grew 15 percent last year in local currency, but 30 percent in U.S. dollars. This year, however, a similar 15 percent growth in tithe translated to a mere 5 percent increase once exchanged to U.S. dollars. Because the church’s budget and appropriations are handled in U.S. dollars, church financial officers continually monitor currency exchanges, Lemon said.

“We have to remember that we face huge fluctuations now because of exchange rates,” Lemon said.

This year church financial officers are also accounting for a shift in the percentage of tithe from NAD that goes toward the world church budget. Between 2000 and 2005 church financial officers adjusted this contribution from 10.7 percent down to 8 percent of tithe from NAD. This year church treasurers continued to reduce the percentage, with a target of 6 percent projected for 2020. The other 12 divisions, by comparison, each contribute 2 percent of their tithe toward the world church budget.

Lemon said the adjustment reflects growing needs in North America. Demographics in the region, he said, are changing “dramatically.” A majority of new believers in North America now come from immigrant backgrounds, and many of them don’t have large earning power, he said.

“There’s a tremendous mission field now growing in North America,” Lemon said. “We need an adjustment that allows this region to remain strong.”

Annual Council delegates also accepted a report by Lemon from the Use of Tithe Study Commission, a group of nearly 100 people who have met since 2005. The commission determined that housing for pastors and other church ministers supported by tithe is an appropriate use of tithe, either through the renting, purchasing, or building of houses.

The commission is also recommending a new policy that organizational bodies such as conferences and unions shall report to the world church’s Executive Committee how much tithe was used in pastoral ministry, administration, education, and literature evangelism in their respective regions.

Finally during the treasurer’s report, Annual Council delegates voted to approve the 2013 operating budget of $174 million.

Delegates also approved several recommendations from the world church’s Strategic Planning and Budgeting Committee. Among the recommendations: Hope Channel Ukraine, part of the church’s official television network, will receive a $490,000 allocation. The network received a broadcast license from the government there. An additional $400,000 will go toward modernizing netAdventist.org, a Web-based communication software platform.