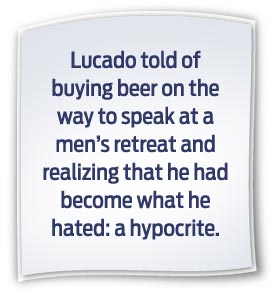 Andy Nash
It had been a long time since I’d read anything by Christian author Max Lucado. Twenty years ago I was one of his early fans—an admirer of his clean phrasing and authentic insights.

At one point I even had a bizarre experience with a Lucado book. I was telling my girlfriend, Cindy, about an anecdote in which Lucado’s 6-year-old daughter wanted him to change professions. “I like you as a preacher,” she explained. “I just really wish you sold snow cones.” But as hard as I tried to find the story again—flipping back and forth through the book—I couldn’t. Finally I just gave up. The next morning I awoke with a strangely vivid thought in my head: Page 89. I grabbed the book and turned to page 89. There it was: the snow cone story. I’ve never quite figured out the significance of this.

After a few years of reading Max Lucado, I stopped. His work was seemingly everywhere; and fairly or unfairly, I felt it had become formulaic, predictable, even institutionalized. (Example: Max Lucado Bible commentaries not with fresh exegesis but with repackaged illustrations that loosely fit the passages.) I missed the authentic early days.

A few weeks ago I happened across a surprising article called “Coming Clean,” written by Lucado for the Summer 2012 issue of Leadership Journal.

“I like beer,” opened Lucado. “I always have. Ever since my high school buddy and I drank ourselves sick with a case of quarts, I have liked beer. I like the way it washes down a piece of pizza and mutes the spice of enchiladas. It goes great with peanuts at the baseball game and seems an appropriate way to crown eighteen holes of golf. . . . I like it. Too much. Alcoholism haunts my family ancestry. . . . So at the age of 21, I swore off it.”

Yeah, I thought. That’s about what I expected—a high-profile pastor’s safe confession of youthful indiscretion. What I didn’t expect was the next few paragraphs.

“I kept my preference to myself. No beer at home, lest my daughters think less of me. No beer in public. Who knows who might see me? None at home, none in public, which left only one option: convenience-store parking lots. For about a week I was that guy in the car, drinking out of the brown paper bag.”

Lucado told of buying beer on the way to speak at a men’s retreat and realizing that he had become what he hated: a hypocrite. “It wasn’t the beer but the cover-up that nauseated me,” he wrote.

Throwing the beer can in the trash, Lucado resolved to make things right—confessing his sin to his church elders. “I didn’t embellish or downplay my actions; I just confessed them. And they, in turn, pronounced forgiveness over me. Jim Potts, a dear, silver-haired saint, reached across the table and put his hand on my shoulder and said something like this: ‘What you did was wrong. But what you are doing tonight is right.’ . . .

“After talking to the elders, I spoke to the church. At our midweek gathering I once again told the story. I apologized for my duplicity and requested the prayers of the congregation. What followed was a refreshing hour of confession in which other people did the same. The church was strengthened, not weakened, by our honesty.”

While we don’t celebrate this Christian leader’s wrong turn, we do celebrate his journey back home. It makes me wonder: Would my own church leaders feel safe being this honest with their congregations—with their colleagues? Or is this honesty only for someone else—the snow cone salesman?

“Therefore confess your sins to each other and pray for each other so that you may be healed” (James 5:16).

__________
Andy Nash is the author of Paper God, a spiritual memoir. He and Cindy lead family-friendly trips to Israel, and can be reached at [email protected] This article was published October 18, 2012.