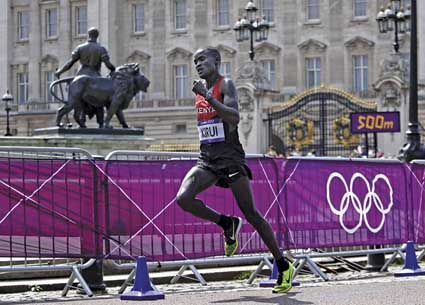 When Seventh-day Adventist long-distance runner Abel Kirui crosses a finish line, he drops to his knees and bows his head, offering a prayer in celebration.

The whole world witnessed his gesture of gratitude this week when the 30-year-old Kenyan won the silver medal in the men’s marathon at the 2012 Summer Olympics in London, England.

Kirui is also a consecutive repeat winner of the World Championship Marathon, winning the event in 2011 by the largest ever margin—two minutes and 28 seconds. His personal record of a two-hour-five-minute marathon places him sixth among an elite community of long-distance runners.

In a sport in which athletes often compete for personal gain or national recognition, Kirui says he finds motivation in bringing glory to God.

“Every race is an opportunity. What I tell God is, ‘Wherever You place me, I will share You.’ So every time I finish a race I say, ‘Thank You, God,’ ” Kirui says.

Raised in rural Kenya in what he affectionately calls a “humble” single-parent home, Kirui says he learned to depend on God early in life. His mother, whom he cites as his biggest spiritual influence, encouraged him to attend church on Sabbath mornings. Today he says his habit of early-morning prayer is an inheritance from her.

“I remember she would wake up in the wee hours to pray that we would choose whom we are going to serve in life,” he says. “Now every morning I get up very early to pray and ask God to give me strength to run.”

As a young boy Kirui says he dreamed of a life beyond the local village. “I would see the [airplanes] and I remember thinking, I am going to fly one day, but then I see it is impossible for me. But then I realized that my passport to the world is running,” Kirui says.

His first competition wasn’t far from home, though. As an elementary school student Kirui placed second in a district championship race just six miles from his village. Later, as a teenager, he remembers idolizing Kenyan long-distance runners such as Paul Tergat, a marathon world-record holder.

At the 2000 Summer Olympics in Sydney, Australia, Kirui watched Ethiopia’s Haile Gebrselassie pull ahead of Tergat in the last nanoseconds of the 10,000-meter race. His other fellow countryman, Erick Wainaina, was similarly beaten in the men’s marathon.

Soon after, Kirui says he decided that there was room for another career long-distance runner from Kenya and that he would use the spotlight to share his faith in God.

Running wasn’t always easy, though. Kirui remembers blacking out from dehydration before the finish line and dealing with injury. He says one race in particular stands out as an example of poor preparation. “I was crawling toward the finish line; the other runners were all passing me.”

Now he trains for up to 1,000 kilometers (621 miles) leading up to a marathon. Still, he’s often beset by pain—?especially, he says, in the last five kilometers (3.1 miles) of a marathon.“How you deal with the pain depends on the state of your mind. Pain is not something that can kill you, so long as you are healthy inside your body. It is like spiritual things,” he says.“I ask God to give me the power to overcome.”

So far, Kirui says his career hasn’t conflicted with his observance of the seventh-day Sabbath. Marathons are largely held on Sundays. “I go to church with my wife and two kids on Sabbath, and then on Sunday morning I go for training,” he says. “And anywhere I compete, I go with my Bible and my Sabbath school lesson, and I take time to pray in my room.”

Kirui also has big plans to invest in Adventist Church infrastructure in his native Kenya. Already he’s helped establish a new church structure. Plans for a church-run school and hospital are on the horizon, he says.

In the meantime Kirui is adjusting to the fame that comes with medaling in high-profile events such as the World Championship Marathon and the Olympics. “People in Nairobi will call out, ‘This is Abel Kirui, the guy who was running!’ ” The first time someone recognized him, Kirui says he was shocked.“I didn’t think anyone knew me.”

—with reporting by Williams Costa, Jr.