BY SANDRA BLACKMER
The vital role Seventh-day Adventist educators play in the spiritual and academic development of young minds took center stage at the 2012 North American Division K-12 Teachers’ Convention. During the four-day event, held August 5-8 in Gaylord Opryland Convention Center, Nashville, Tennessee, keynote speakers and workshop presenters underscored the educator’s central call to commitment, service, and academic excellence, as well as their primary mission to lead children and youth to Christ. Some 6,300 teachers, principals, and other educators attended.

“Adventist education has distinct content and a unique value system that sets it apart from other such systems. It’s mission-driven,” Larry Blackmer, vice president for education for the North American Division (NAD), told Adventist Review. “These conventions focus on not only stellar academics but also the salvation of our kids. That’s the reason Adventist education exists—and it’s the core of the convention theme, ‘Moving Hearts and Minds Upward.’”

Why Opryland?
The convention is held every six years; this is the second time it has convened in Gaylord Opryland.

“Very few hotels or convention centers in North America can handle such a large group,” Blackmer explains.
That’s understandable when you consider the need for not only an auditorium large enough to accommodate more than 6,000 people for general sessions, but also space to house 530 professional-growth breakout sessions and 150 exhibit booths.

“We teachers need to be on our knees, but it’s also important for us to stay abreast of research, methods, techniques, and technology,” says Jeannie Costopoulos of Valley View Seventh-day Adventist Christian School in Scottsbluff, Nebraska. “The convention provides something for everyone—from the elementary teacher to the preschool teacher to the food service director. The Opryland has many breakout rooms in a variety of sizes, and with hundreds of presenters our needs were well accommodated. I left the convention spiritually renewed, professionally refreshed, filled with new ideas, and better equipped to return to the classroom. This was truly using our resources in a very practical manner.”

Breakout Sessions
Convention attendees had no lack of options for breakout sessions. Topics ranged from teaching tips and classroom management to library-resource enhancement and ways to use humor in the classroom.

One such session was led by Richard Pershing and his team from the Center for Conflict Resolution at La Sierra University. Their focus was bullying, and they described their approach as different from the norm.

“Incidents of bullying are generally treated as single occurrences, but that’s not the answer,” Pershing says. “A total culture change is needed in order to effect lasting change.”

To this end, in cooperation with the NAD Office of Education and Adventist Risk Management, the center is making available to all Adventist schools at no charge a survey instrument called Olweus in order to collect data on bullying and create a common-language framework for a discussion among educators of bullying and violence prevention. The center is also proposing to help a limited number of schools pilot the Olweus Bullying Prevention Program.

To read the full interview with Pershing and his staff, go to www.adventist review.org, or watch for the article in an upcoming issue of the magazine.

Casting the Vision
In his opening remarks Blackmer described the goal of the convention as twofold: that the teachers become infused with God’s Spirit so that they can return to the classroom better able to share the love of Jesus with their students, and to say thank you to them for their commitment and their love for young people and Adventist education. Recommitment: Hundreds of teachers responded to Carlton Byrd's opening night call to rededicate themselves to educational ministry. Byrd is pastor of Oakwood University church and speaker/director of Breath of Life.

“You are the physical representation of Jesus to the students in your classroom,” Blackmer said, “so you personally need a Spirit-filled life in order to impart that to your students.”

Opening Address
If the 6,000-plus educators who poured into the auditorium on opening night were looking for a keynote speaker who would probe the heart of Adventist educational ministry, Carlton Byrd did not disappoint.

A product of Adventist education himself, Byrd challenged teachers to “never forget that the mission of our schools is evangelism, and the children must see Jesus in you.” He added, “If you don’t believe in the Adventist message, you shouldn’t be teaching in the Adventist school system.”

Byrd also noted that support from parents and other church members is vital to a school’s success, and that “praise for Adventist education should be on the lips of every church member.” Byrd’s own two daughters attend Adventist schools, he said, because he wants them to be “lifelong Adventists.”

Hundreds of educators pressed to the front of the auditorium when Byrd called forward those who wanted to recommit themselves to their sacred calling and their students.

From Far and Near
Educators from the nine NAD unions, the newest NAD territory of Guam-Micronesia, and regions as distant as South Africa, China, and Europe flew in for the event. Chek Yat Phoon, education director for Northern Asia-Pacific Division, traveled from South Korea. He says that the positive experience and learning he garnered at the 2006 teachers’ convention convinced him to attend
this one as well.

“I also brought with me 30 teachers and two union education directors from my division,” Phoon said. “I wish more of my teachers could have come.”

Euro-Africa Division education director Barna Magyarosi says it was worth making the long trip to the United States “to see more than 6,000 educators gather together to ponder the major issues of Adventist education” and “to feel the common heartbeat.”

“Even though we are separated by an ocean, the major issues . . . are the same. It’s a global village.”

“We are like sisters,” says Stefani, who was born in Brazil, grew up in Italy, and currently is teaching in the Nashville area. “That’s the beauty of our institutions: we are like a family.”

Samantha Dingman of Greaves Adventist Academy in Montreal describes being part of such a large educational gathering as encouraging. “Teachers in small schools sometimes feel very isolated, like we’re the only ones dealing with problems. Here there are so many other teachers from all over who are challenged by similar things, so it’s very encouraging to know I’m not alone.” 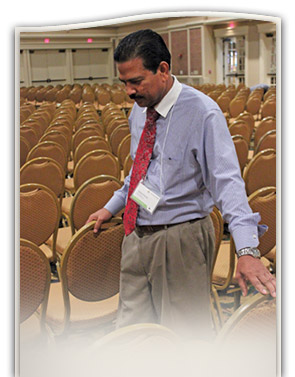 Prayer Walking: Before the convention begins. NAD Prayer Ministry assistant coordinator Stanley Ponniah walks past all 6,800 chairs set up in the auditorium and prays for the people who will be sitting in each seat.

Prayer Power
For the first time at an NAD Teachers’ Convention the division’s prayer ministries team set up a prayer room near the auditorium in which to entreat God throughout the day to bless the meetings and the educators. The five-member team, led by coordinator Ruthie Jacobsen and assistant Stanley Ponniah, began the days early at 6:15 a.m., and continued until the convention center closed after the evening meeting.

Such prayer rooms are not new to the team members. They have prayed at numerous large church gatherings, such as General Conference sessions, Annual Councils, Spring Councils, and NAD year-end meetings.

“When we gather for church business, Satan also brings his delegates,” Ponniah, senior accountant for the General Conference, says. “We come by invitation, but he invites himself, and he is very much present. He tries his very best to divert the attention of [all those here].”

The team also prayed for those who came to them with personal prayer requests.

Anointing Service
Hundreds of educators rose early on the final day of the convention to participate in an anointing service of dedication, led by the prayer ministries team, NAD president Dan Jackson, and some 20 pastors.

“It was a powerful experience; there were many tears,” Mike Schwartz, principal of Bakersfield Adventist Academy in California, told Adventist Review. “Many teachers came here with giant challenges and heavy burdens on their hearts. This service wasn’t simply a ritual; it was a real, heartfelt rededication.”

Message of Commitment
Jackson underpinned the core belief of the Adventist Church in the event’s closing commitment address: “There is only one true north,” he said, “Jesus Christ and Him crucified, and let it never be said there’s another.”

Jackson’s message explored the foundation of true Christian leadership and the principles upon which Christians build that foundation.

Referring to disparaging and condemnatory electronic communication commonly used today even among church members, Jackson also noted, “Jesus would not talk and act the way that many are doing behind a computer screen. . . . Some are injuring the Lord’s work when they think they are advancing it,” he said.

Jackson thanked the teachers for being leaders in God’s cause, and noted that “it’s not about you and me when we’re doing God’s work; it’s about what God is doing that counts.”

The next NAD Teachers’ Convention is being planned for 2018. The venue has yet to be determined.

______
To learn more about the convention, go to www. 2012teachersconvention.com. To read a fuller report, go to www.adventistreview.org.