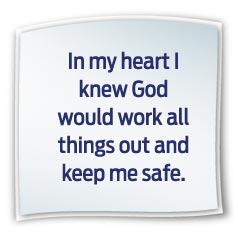 Ashley Batiste
I remember it as if it were yesterday. the one unfamiliar word to me suddenly became familiar: tornado. The sky was unnaturally black and gray that day. The clouds no longer sat perfectly white, but hung low, ready to burst. The wind began to scream and howl, rapidly leaving its imprint on just about everything. Huge raindrops moved horizontally, pounding everything that stood in their way. Being the proud southern Californian I am, my tornado experience was limited to a couple of minor ones during my freshman and sophomore years at Oakwood University in Huntsville, Alabama. But that day, looking through the windows in the lobby of my dorm, I knew this one was different.

My junior year was winding down, and in the midst of the excitement of finishing out the year with the hustle and bustle of finals and impending senior status I was thinking about anything but storms.  Yet just then the storm reached its peak, ripping out windows, slamming down oak trees, and quickly knocking out power. As darkness settled in, people began to panic.
A curfew was imposed on the city at night. Everyone wondered how long the power outage would last. Two hours? A day? What if it lasted longer than that?

A couple hours turned into a couple days. Cold showers became common; food and gas became scarce. The faith in God that we students always talked about was being put to the test—a test I admit we were not passing. As the days progressed, the rising of the sun became our alarm clock, studying for finals became less important, life without cell phones and laptops a harsh reality, and the cafeteria food we once dreaded, our best friend.

Fast-forward a year to now: summer 2012. I’m a recent Oakwood graduate, new to the East Coast, and my worst fear has become a reality—a hurricane-level storm has knocked all power out. As I lay in my bed the night it happened, I figured the electricity would come back in the morning. But when I awoke, the power was still out, and according to an article I read off my smartphone, it could be a multiday outage—possibly lasting up to a week. And that’s when the waterworks began. The storm left 3 million residents without electricity and miserable in the scorching heat. The thought of a week without power, alone in an unfamiliar city in a record-breaking heat wave, left me extremely frustrated.

In my heart I knew God would work all things out and keep me safe. But I couldn’t help asking, “Why me?” Of all the places I could be living, why was I here when this was happening? But this time I tried looking at the brighter side of things. I had a car full of gas, had been able to purchase a lantern, food, and water, and the local McDonald’s (though lacking air-conditioning) was up and running, with plenty of outlets available to charge my phone. Despite being frustrated, I was determined to make the best of this situation.

Thankfully, after two long days the power came back on. These two experiences taught me that our faith is always being put to the test, whether in big things or small things. Matthew 17:20 says, “Truly I tell you, if you have faith as small as a mustard seed, you can say to this mountain, ‘Move from here to there,’ and it will move. Nothing will be impossible for you.” Our challenge? To possess unadulterated faith—regardless of the circumstances.