BY MARK A. FINLEY
This is the second part of an article about biblical spirituality. Part 1 appeared in the August 16, 2012, Adventist Review and dealt with prayer and meditation as defined by the Bible and Ellen White. Part 2 outlines what’s behind today’s literature about contemplative prayer. Both parts are available on the this Web site.—Editors.

Understanding Centering and Contemplative Prayer
In centering prayer the individual chooses a common word and continually repeats it to center his or her thoughts. This exercise purportedly prepares the worshipper to enter a contemplative state in which all distractions cease. The goal involves a journey to the center of one’s being to enter into a state of oneness with the divine presence within. The Cloud of Unknowing, written by an anonymous fourteenth-century author, includes practical principles of contemplative prayer. It instructs those interested in experiencing this form of prayer to “take just a little word, of one syllable rather than of two. With this word strike down every kind of thought under the cloud of forgetting.”

Centering and contemplative prayer have been taught by Roman Catholic monks in monasteries for centuries. More recently Thomas Merton, Thomas Keating, and Basil Pennington, as well as Quaker Richard Foster have advocated it and conducted retreats for thousands of people on contemplative spirituality. Their books have sold hundreds of thousands of copies. Most of the advocates of contemplative spirituality see real value in learning from the techniques of Eastern meditation. They often draw from the teaching and writings of medieval mystics, as well as Hindu and Buddhist spiritual teachers. Basil Pennington, one of the well-known proponents of the centering prayer technique, has delineated four guidelines for centering prayer.

1 Sit comfortably with your eyes closed, relax, and quiet yourself. Be in love and have faith in God.

3 Let that word be gently present as your symbol of your sincere intention to be in the Lord’s presence and open to His divine action within you.

4 Whenever you become aware of anything (thoughts, feelings, perceptions, images, associations, etc.), simply return to your sacred word, your anchor.

Pennington’s guidelines for entering into centering prayer are deeply influenced by a group of monks called the Desert Fathers in the Middle Ages. These men lived monastic lives of prayer and meditation in the deserts of the Middle East. The whole concept of looking to the Desert Fathers and the monastics for a deeper spirituality is seriously flawed. Jesus declared that His followers were to be in the world but not of the world (John 17:15). They were to be “the salt of the earth” and “the light of the world” (Matt. 5:13, 14). Paul affirms this truth by declaring that followers of Christ should shine as “lights” in the midst of a “crooked and perverse generation” (Phil. 2:15). Jesus and the disciples lived their lives between the mountain and the multitude. They spent time with God but did not neglect spending time with people. Their lives were dedicated to devotion, but they were focused on service. True genuine spirituality involves both a relationship with God and loving service to God’s children and can never be truly lived by choosing to live a life of isolation. The One whom we serve “went about all the cities and villages, teaching in their synagogues, preaching the gospel of the kingdom, and healing every sickness and every disease among the people” (Matt. 9:35). Daniel Goleman’s comments should give every Christian pause before entering into contemplative spirituality. “The meditation practices and rules for living of these earliest Christian monks bear strong similarity to those of their Hindu and Buddhist renunciate brethren several kingdoms to the East.”1

The concept of centering prayer raises serious questions for followers of Christ. The use of a sacred word to center one’s thoughts seems strangely similar to the mantras of the East. Is centering prayer Eastern mysticism in Christian garments? Jesus is very clear when He admonishes, “When you pray, do not use vain repetitions as the heathen do” (Matt. 6:7).2 Does not the constant repetition of a “sacred word” violate Christ’s clear instruction? Why is there such a conspicuous absence of anything like centering prayer in the Bible? The Old Testament prophets, the New Testament believers, and Jesus never give even the slightest hint of continuously using a sacred word to center their thoughts in prayer. This should give us serious pause before we experiment with something that may open the door for satanic delusions. Thomas Keating, Basil Pennington, and Thomas Clarke state, “We should not hesitate to take the fruit of the age-old wisdom  of the East and ‘capture’ it for Christ. Indeed, those of us who are in ministry should make the necessary effort to acquaint ourselves with as many of these Eastern techniques as possible.”3 This counsel would sound very strange to Peter, who proclaimed, “Nor is there salvation in any other, for there is no other name under heaven given among men by which we must be saved” (Acts 4:12). The New Testament believers did not “turn the world upside down” with a gospel that blended Eastern philosophy with Christian doctrine. Neither should we. The New Testament believers did not seek to get “in touch” with the divine presence within. They looked to their crucified, resurrected, and returning Lord, and their lives were transformed.

Thomas Merton describes the goal of centering prayer in these terms: “At the center of our being is a point of nothingness which  is untouched by sin and by illusion, a point of pure truth. . . . This little point . . . is the pure glory of God in us. . . . It is in everybody.”4
Thomas Keating adds these thoughts: “Contemplative prayer is not so much the absence of thoughts as detachment from them. It is the opening of mind and heart, body and emotions—our whole being—to God, the Ultimate Mystery, beyond words, thoughts, and emotions.”5 It is well to note these phrases in the above quotes, “point of nothingness,” “and the glory of God in us which is in everybody.” This sounds strangely like Buddhism. The idea of “the god within” comes directly from Eastern mysticism. Keating’s expression “beyond words, thoughts, and emotions” calls into question the nature of genuine spirituality. Can it be defined as a mystical experience or a relationship with God based on truth and fact that is life-changing?

The biblical declaration that we are created in the image of God reinforces our ability to think and reason. Should we not be exceedingly cautious of any approach to spirituality that bypasses the mind and leads us to depend on a subjective, mystical experience as the measure of genuine spirituality? Mysticism is purely subjective. It does not rely upon biblical truth as the measure of spirituality, but shifts the emphasis to our own experience. Yet the Word of God has been given to us for the very purpose of establishing our faith. Jesus’ own words are too plain to be misunderstood: “Sanctify them by Your truth. Your Word is truth” (John 17:17). What we know about God is based on the truth of His Word. Trusting in experiential knowledge over the biblical record takes a person outside of the standard of all truth—the Bible. Encountering God in His Word leads us to a genuine Christian experience. When our subjective experiences, feelings, and emotions do not lead us to the Word, beware! 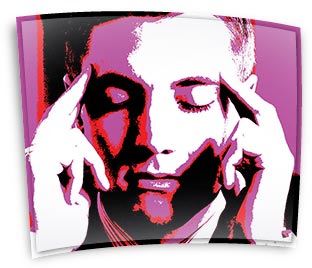 the image of Christ as we meditate upon God’s Word, seek Him in prayer, and open our minds to the transforming power of the Holy Spirit, certainly it is biblical. The apostle Paul admonishes believers at Rome “not [to] be conformed to this world, but [to] be transformed by the renewing of your mind” (Rom. 12:2). He urges the Philippians to “let this mind be in you which was also in Christ Jesus” (Phil. 2:5). To the Colossians he says, “If then you were raised with Christ, seek those things which are above, where Christ is, sitting at the right hand of God. Set your mind on things above” (Col. 3:1, 2). Ellen White beautifully expresses the idea of our characters being formed in the image of Christ: “In Jesus is manifested the character of the Father, and the sight of Him attracts. It softens and subdues, and ceases not to transform the character, until Christ is formed within, the hope of glory. The human heart that has learned to behold the character of God may become, under the influence of the Holy Spirit, like a sacred harp, sending forth divine melody.”6

When the term spiritual formation is used to describe contemplative spirituality, centering prayer, and a religious experience based on a mystical involvement, however sincere its proponents may be, it is certainly not biblical. If by spiritual formation we mean blending the meditative techniques of priests and monks or non-Christian religions with biblical ideas to achieve some sort of spiritual oneness with the so-called spark of divine within us, this is not biblical at all.

Adventism’s Uniqueness
Adventism’s uniqueness lies in our understanding of the great controversy between Christ and Satan. In contrast to an ever-deepening knowledge of Christ through His Word and an ever-closer relationship with Him, Satan will offer a counterfeit spiritual experience. Seventh-day Adventists believe that in the final conflict over the law of God, His people, saved by His grace and transformed by His love, will reveal His compassionate character before a waiting world and watching universe. God will have an end-time people who desire to be like the One they most admire, a people who long for something much deeper than a mystical experience based on subjective feelings on the one hand, or cold, legalistic formalism based on an intellectual assent to doctrinal truth on the other. The words of the apostle John will beat fervently in their hearts: “Beloved, now are we children of God; and it has not yet been revealed what we shall be, but we know that when He is revealed, we shall be like Him, for we shall see Him as He is” (1 John 3:2).