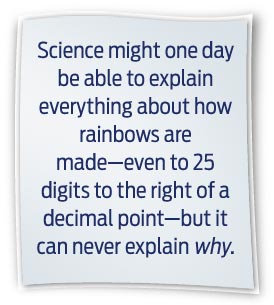 Cliff Goldstein
As I drove to the office, an early-morning rainbow framed a half parabola of creation in a gloriously gaudy arc. Remembering God’s promise in Genesis 9 that He wouldn’t again destroy the earth by water, I smiled because simply seeing the rainbow helped affirm the reality of that covenant promise.

Unfortunately, how naive, even superstitious, such a belief would seem to those who dismiss the universal flood for the same reason they do a literal six-day creation of life on earth—that is, science. Not understanding (apparently) just how contingent, subjective, superficial, and (according to the most radical critics) political, sexist, even racist scientific knowledge can be, they choose “science, so-called” (Ellen White’s perceptive phrase)1 over a clear “thus saith the Lord.” Science says it; I believe it; that settles it (I guess).

One slight problem: if the Flood was only local, then every local flood makes God’s Word void, because He said that the rainbow was a token of His covenant promise not to do again what He did in Genesis, which was to destroy the whole world by water, not just a corner of Mesopotamia. Though Scripture says, “Let God be true, and every human being a liar” (Rom. 3:4), according to their logic it should read, Let science be true, even if it makes God a liar (and every rainbow a colorful testimony to that lie).

Sure, thanks to science (physics and optics), we now know that a rainbow occurs when sunlight is both refracted and reflected in drops of water that disperse light at various angles (with the most intense light at 40 to 42 degrees). Light enters a raindrop at one point, is reflected off the back of that drop at another, and leaves at another, creating the colors that we see (and a host of others we don’t). The science of rainbows can get pretty technical too. According to one site I visited, “the beam will be at its most concentrated when small changes in the input angle have the least effect on the output angle. That is, if we let a_0 be the value of the angle of incidence that corresponds to the critical value of the impact parameter computed in Experiment #1. If da is a very small angle, then D(a_0+da) should be very close to D(a_0).”

John Keats feared that science would “unweave a rainbow.” But even if we could parse, measure, predict, and quantify everything about a rainbow down to the innards of each photon and the underbelly of every quark, what would that prove other than we better understand the natural laws God used to create the signs of this covenant promise? Science no more removes God from the equation than understanding the action of hormones in the limbic system reduces human love into something akin to the liver secreting bile. Science might one day be able to explain everything about how rainbows are made—even to 25 digits to the right of a decimal point—but it can never explain why.

We, though, know why. Because God created our world in such a way that when sunlight and mist are in right relationships to each other, the mist breaks up the light by refracting and reflecting it at different angles that create bands of electromagnetic waves which, when reaching our eyes, laminate the image of rainbows in our heads. And He did it (the “why” that science can never explain) to remind us of His covenant promise that never again would He destroy the world by water.

In Revelation 4:3 a rainbow appears around the throne of God. Ellen White calls it “the rainbow of God’s promise, which was a token of His covenant with Noah . . . a pledge of God’s mercy to every repentant, believing soul. . . . It declares to the whole world that God will never forget His people in their struggles with evil.”2 Though one might not be able to extract all that from the optical phenomenon itself, the outrageous glory of that morning rainbow did hint at transcendence, at something wonderfully, even magically, beyond mere light refraction and reflection. Which is why limiting it by these scientific processes alone would be like explaining Rilke’s Duino Elegies in terms of nothing but synaptic clefts and neurotransmitters: accurate, but narrow and crudely beside the point.

_____________
Clifford Goldstein is editor of the Adult Sabbath School Bible Study Guide. His latest book, Shadow Men, is available from Signs Press in Australia. This article was published August 16, 2012.