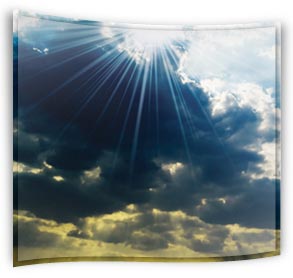 Jill Morikone
Lightning flashed across the sky, followed by a sudden clap of thunder. Rain fell in sheets across the house. I glanced out the window as a new sound began—hail! This was a pretty serious storm. And considering what had happened just two days before . . .

Then suddenly I heard it. The tornado siren. In the middle of a storm that meant only one thing—funnel cloud activity.

The back door banged as Greg walked in. “Jilly, I think we’d better go under the house. Now.” I grabbed my boots and wriggled my toes into them as he opened the sliding-glass door. Black clouds churned overhead as the siren continued blaring. Greg jumped easily through the door and then reached out a hand to me. I pulled my jacket’s hood up over my head, took his hand, and went out as well—trying to keep from being pelted by those little balls of ice. Squatting down, Greg opened the door to the crawl space under the house.

In our haste we had neglected to bring a flashlight. I scraped my finger on something as I crawled along toward the concrete pillars that supported our home. “This will be the best place,” Greg said as he scooted in beside me.

We sat and looked out the little door at the tumultuous storm. I grabbed Greg’s hand as he said, “Let’s pray.” We bowed our heads and asked God for His protection, but also for whatever His will was for our lives. Would it end like this? Maybe. I searched my heart. Was there anything separating me from Jesus—or even from someone else?

We had glibly weathered serious storms before, sometimes staying inside our house in spite of the siren. But the tornado that had ripped through nearby Harrisburg, Illinois, just two days prior to this storm somehow brought the danger closer to home—perhaps too close for comfort.

Six people in Harrisburg had died in that storm. Were their lives right with Jesus? I wondered. Had they prayed and asked for protection, too? I know we live in a world of sin, violence, and strife in which Satan does his best to wreak havoc while he still has the chance. But I also know that even the wind and the waves obey my Jesus. Nature is still under His control.

The storm raged around us and then slowly passed as we sat there, hand in hand.

Later from our living room I saw one of the most beautiful rainbows I had ever seen. Its very edges touched the field and seemed to shimmer. It caused me to reflect on God’s goodness and mercy, and what had just taken place. But I also couldn’t help pondering, Why were some people’s lives destroyed and ours left untouched?

I don’t have the answer to this question. I can’t even pretend to understand. But I do know that every day we see the outworking of the great controversy. On Satan’s side stand death and destruction, foreboding and fear, chaos and confusion. On the side of Jesus stand life instead of death; faith instead of fear; peace instead of confusion; and, most important, the ultimate victory. Because of Him, we can live forever!

Each of our lives on this earth is really just a vapor; here today, gone tomorrow. Only those who know Jesus and accept Him as their Savior will receive eternal life. Are we doing all we can to share this message of love with others so that as many as possible will not be lost but rather saved for eternity?

Oh, how I want to live each day for Jesus! To share Him, to spread His love, to speak for Him now—for I may not have tomorrow.

Let each of us choose to live for Him today.