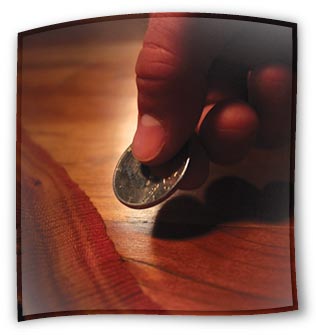 BY ANTHONY KENT
In an economical 75 words Jesus told a parable strikingly rich with mental images, strong emotions, and the real issues of life. Like several others of the Master’s brief parables, however, it’s a surprisingly hidden, overshadowed, or even “lost” parable.

This brief story is traditionally overshadowed or “lost” because of its location between two of Jesus’ best-known parables—the lost sheep and the prodigal son. A hundred paintings have been rendered of the other two, along with thousands of sermons. Much less has been sketched or said about the middle story of the three. In three short verses (Luke 15:8-10) the parable of the lost coin reveals priceless insights about the character of Jesus’ affection for the lost not present in the other two parables. This story is like a hidden valley, rarely explored by those who frequent the well-worn paths, but richly rewarding those who make even a fleeting visit.

We notice almost immediately that the major focus of Jesus’ parable is the “lost”—a telling indication of what He cares about most. Rather than being called “The Coin,” “The 10 Coins,” or “The Woman and Her Coins,” the parable has traditionally been called “The Lost Coin.” The parable characterizes the woman as focusing her attention and efforts only upon the lost.

She lights a lamp, not to bring needed light to the house—with the added bonus of probably finding her missing coin. No, she lights the lamp in order to find her lost coin. And in lighting a lamp, she burns oil: she spends even more money on the fuel of the lamp to find her missing coin! She is raising the cost of this rescue operation. We see quickly that she is doing whatever it takes to retrieve the lost.

She sweeps the house—not because the house could do with a cleaning, and she may happen to find her lost coin in the process. No, instead she sweeps the house for the sole purpose of finding the coin. She searches like the shepherd in the previous parable until she finds her coin.

The parable also describes her searching “diligently” (KJV) or “carefully” (NIV)—an added intensifier not found in the shepherd’s search for his lost sheep. Most commentators assume that the woman Jesus describes is comparatively poor, living in a small, single-room house devoid of windows, probably with a solitary low door. The floor of the house would likely have been pressed earth or stone. At Capernaum, a location well known to Jesus, archaeologists have uncovered a house dating to the first century with just such a stone floor—with coins in the cracks of the floor!1 The diligence of this woman in Jesus’ parable ensured that her lost coin was not left behind for archaeologists to recover centuries later from her house.

Ellen White delightfully captures the essence of the parable and the motives of this diligent woman: “The coin, though lying among dust and rubbish, is a piece of silver still. Its owner seeks it because it is of value. So every soul, however degraded by sin, is in God’s sight accounted precious. As the coin bears the image and superscription of the reigning power, so man at his creation bore the image and superscription of God; and though now marred and dim through the influence of sin, the traces of this inscription remain upon every soul. God desires to recover that soul and to retrace upon it His own image in righteousness and holiness.”2

When the lost coin is found, we become witnesses to an extravagant celebration. The lost coin was a Greek drachma, according to the text. This brief story in Luke 15 is the only time this familiar piece of money is mentioned in the New Testament. The drachma coin was made of silver. In earlier classical times it was worth a single day’s wage for a laborer, but by the time this story was told by Jesus and recorded by Luke, the drachma had devalued considerably. 3 This change in valuation is an important detail that shouldn’t be lost to New Testament readers of the twenty-first century. To the rest of the careless world, the woman’s loss is just a small silver coin that is plummeting in value. But to her, it has—and retains—immense value.

We can also then conclude that the celebration she stages for finding a drachma would have cost more than the face value of the coin! She calls her friends and neighbors together and invites them to celebrate with her: in our vocabulary, she “throws a party”! A celebratory party in most contexts and cultures is not normally a cheap event. A small silver coin that is easily lost is not likely going to cover the expenses of the celebration.

The text of the parable fittingly uses a similarly extravagant quantity of words and space to describe and explain the celebrations. The setting of the parable—the woman, her 10 coins, the loss of the single coin, her conscientious search, and her successful finding of the lost coin—is contained in a single verse (verse 8). Yet when the lost coin is found, the ensuing celebrations and the extrapolations require twice the volume—two verses and nearly 50 of the words!

Why the emphasis upon the celebration?

For this unnamed woman the coin was obviously of immense value. It was precious to her. Some commentators suggest that these 10 coins from which one was lost were her wedding dowry, and that eventually they could become the dowry for her daughters at the times of their marriages. 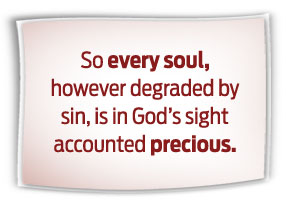 An additional reason for her celebration is that with the finding of the lost coin, the woman is vindicated. She is not irresponsible. She has not delinquently frittered the coin away: she is not a waster or a gambler. She isn’t absentminded: she temporarily lost a coin, not her “marbles.” Her diligent and successful search has vindicated her! She is a reliable and responsible person, worthy of trust by her family, peers, and community. All that seemed threatened is restored. These also are powerful reasons to celebrate.

Her household and community are also vindicated by the recovery of the lost coin. There is not a thief in their community. The coin was not stolen. In the New Testament era, stealing appears to have been a particularly odious crime: remember that it was two thieves who were crucified with Jesus. But with the finding of the silver coin, the community could exhale and live in peace again, free from suspicion and innuendo. And the value of the drachma, as small as it may have been, was not lost from the community. The collective wealth of the community had not been diminished, so friends and neighbors as well would have had reason to celebrate the finding of this coin.

But the greatest reason for the emphasis upon the celebration in the parable lies in the original reason why Jesus told this parable and the others around it. Jesus had been caustically challenged by the Pharisees and scribes. They said of Him, “This Man receives sinners and eats with them” (verse 2, NKJV).4

In response to this accusatory challenge, Jesus told the parables of the lost sheep, the lost coin, and the prodigal son. In the language of our day, we might hear Jesus saying, “You ain’t seen nothin’ yet!”

Through the parable of the lost coin, Jesus declares that He doesn’t merely receive, welcome, and eat with sinners: He is diligently searching for them until He finds them! And what is more, His hearers are astonished to learn that when a sinner is found and repents, there are corresponding celebrations in heaven!

Just as He once turned over the tables of the moneychangers in the Temple, Jesus here overturns the “economics” of salvation. While some may think that this coin—or to be more precise, the sinner—is devalued, Jesus considers the value of the thing lost as priceless. The time, energy, and expense invested in searching for the lost is substantial—in the truest sense of the word, “priceless.” The celebration the woman stages, and the far more extravagant one envisioned in heaven, are in keeping with the real value of the change in status from “lost” to “found.”

We can readily imagine how these tax collectors and “sinners” initially felt when Jesus was taunted with “This Man receives sinners and eats with them.” They almost certainly felt devalued and demeaned, the dross of society. But as they listened to Jesus, they could not have failed to understand their incalculable potential value to Him and His kingdom, particularly as they transitioned from “lost” to “found.” We can be sure that they were drawn to Jesus as they listened and reflected upon the intent of His story.

Yes! This is a “feel good” parable. It’s a homey story with a great ending. The Pharisees and scribes were pointedly but gently instructed about their erroneous views of “sinners.”

But what of us? How do we regard “sinners”? Do we have such a similarly searching attitude toward the lost? Are we even now imagining the celebrations in which we will join when God “finds” them through our diligence?

Bible commentator Klyne Snodgrass writes of the parable of the lost coin that “its picture of God diligently searching is poignant. If that is the character of our God, it should be our own character as well. These parables [the lost coin, the lost sheep] do not tell us how to search for the lost, but they do imply that we should.”5

Let this very significant and appropriate application offered by Ellen White settle into your heart and your attitudes: “Wherever we may be, there the lost piece of silver awaits our search. Are we seeking for it? Day by day we meet with those who take no interest in religious things; we talk with them, we visit among them; do we show an interest in their spiritual welfare? Do we present Christ to them as the sin-pardoning Savior?”6

_______________
Anthony Kent is an associate secretary of the Ministerial Association of the General Conference of Seventh-day Adventists in Silver Spring, Maryland. He has served as an evangelist for 25 years in the South Pacific Division and around the globe.