Would I do It All Over Again? 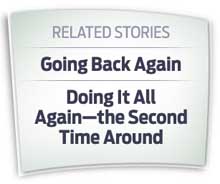 BY HARPER DE?LONG*
Irecently watched a 3ABN telecast on a One-Day School project in Zimbabwe. Several of these modest but quickly built structures would house the first Seventh-day Adventist school in their region. The excitement on the faces was hard to contain within the television screen. Many people came out to watch; even more came out three hours early to enroll their children. One man said, “I want my son in the Adventist school because I want him to have the best!” Contrast this with one of my friends telling me he or she was thinking of transferring their child from an Adventist school to public school next year. Other church friends have expressed that while Adventist elementary school was OK for their child, public school was definitely their plan for high school. Then I heard that 50 percent of a nearby Adventist academy senior class stated that they had selected non-Adventist colleges to attend the next school year. Recent statistics reveal that only one third of Adventist parents have a child enrolled in Adventist schools.

In Zimbabwe the parents  saw strong academics and a commitment excellence. They extolled the virtue of Christian teachers. High officials, including the governor, explained that having students educated in the Adventist school would result in the betterment of their country. One Adventist school was not enough. They wanted more.

Adventist schools here in North America are no different: the curriculum is cutting-edge, teachers are highly trained and committed to Christian education, and students repeatedly score academically in the top percentiles across the nation. So what’s the difference?

When I asked my Adventist friends, the answers I received pointed to a long list of flaws. The most prevalent response: Why choose an Adventist school when public or other private school classrooms offer so much more? As for their child’s spiritual need, it would be met at Sabbath school and church. Their answers, given so casually, made me wonder where the commitment and excitement for Adventist education has gone.

Our Only Option
It was a given that our children would be enrolled in an Adventist school. Their first-day photographs show nothing but smiles as they embarked on their individual K-12 journeys. As I look back, their experience is positive. But being completely candid, I’ll have to say it wasn’t all sunshine and happiness. Our expectations of a “safe Adventist place” were a bit surprised when we encountered birthday parties serving pepperoni pizza or where dancing was part of the entertainment. Our children were sometimes hurt when they were not included because they didn’t do certain activities on Sabbath or go to see the latest Hollywood blockbuster.

In those 20-plus years there were occasionally teachers who failed to teach or years when the academics simply didn’t challenge. Now and again there would be days when my spouse and I would look at each other and say, “All this, and we get to pay for it, too!” But never once did we consider non-Adventist options. We found, in the midst of the good and the bad, that opportunities for learning are presented on a level that goes beyond the classroom.

Something to Think About
Enrolling your child in an Adventist school gives them daily exposure to a Seventh-day Adventist Christian worldview. Jesus, Creation, prayer, service, the Sabbath, worship, and biblical truth are just the beginning of emphases not found elsewhere. Commitment to your Adventist school ties your family closer to their church. They want to be where their friends are, their teachers become further Christian witnesses outside of the school environment, and church attendance becomes habit-forming.

A parent may be tempted simply to change schools when they don’t like what’s happening, especially when things aren’t going well. Interestingly, many parents I know who did this eventually found the same or similar problems elsewhere and missed their Adventist school experience. Staying with a school even through troublesome times teaches children loyalty, commitment, and to face challenges head-on. Adventist schools allow you to partner with them in many ways. Get involved. Recognize where the challenges are. Get to know the teacher. Offer to assist. Teachers who feel your support are more open to suggestions on how best to reach your child. And when all that doesn’t work, it still gives you tremendous opportunity to teach your child.

Dinner Table Discussions
Many a discussion was had around our dinner table as we answered such questions as “Why are we vegetarian?” “Why don’t we go to movies every Saturday night?” “Why can’t I wear what some of my friends are wearing?” I thought having a child in an Adventist environment would preclude such conversations, and it caused some frustration at the time. However, as I look back, those were the times that gave clarity to our faith, beliefs, and decisions. Thankfully, those same ideals were chosen by our children as they entered adulthood with a fuller understanding of why they were Seventh-day Adventists. Social networks are also of inestimable importance. While some of our children’s friends didn’t always practice their Adventism in the same way, our children were not teased for their beliefs. While it didn’t feel good to be left out of certain events, each child had opportunities to witness. The same questions around our dinner table were often asked at the lunch table by their Adventist friends. While our children could be witnesses in the public sector, the Adventist system offered them a safer place to practice their faith and still demonstrate Christian qualities that didn’t go unnoticed by their friends. Eventually as they grew older, these same friends became of “greater” interest. Adventist schooling was where they began to date and eventually chose a life partner.

I remember having quite a bit of angst—especially as we neared high school—over the lack of advanced classes, fewer class offerings, or what I perceived as a lack in college preparedness. Smaller church schools often have limited budgets for qualified resource teachers who can assist students with special needs.  But at the same time, there were advantages to having smaller classes and teachers who gave hours after school to make sure concepts were understood and offered words of encouragement, counsel, and interest. Long after graduation there were teachers who cheered my children on, welcoming them home and peppering them with questions about their experiences. And when asked, each of my children expressed that the main reason they are still in the Adventist Church—other than their beliefs—were the adults in the church, including teachers who expressed an interest in them.

What I Know Now
As I look back, I wish I had better understood what I know now. The Adventist education they received was more than enough. Academically, my children were fine. College, while challenging, was a fairly easy transition. The long-term benefits far outweighed what might have been found in public education options that intentionally avoid, if not discredit, Christian values. The tendency to look longingly over the fence at what one might have can make you lose sight of what you do have—those things that are less tangible and, to be honest, are of more eternal value.

My children are one of the greatest gifts God could bestow. The level of trust and faith God places on us to rear them for His service and His heavenly kingdom is amazing. To place a child outside of Adventist education is to take a calculated risk with their circle of friends, their spirituality, beliefs, and behavior. Are some of those risks inside the Adventist system? Yes, but you will also find Jesus, truth, and a people who, although they are flawed, are on the same journey with you in preparing for the Second Coming and eternal life. And that makes all the difference.