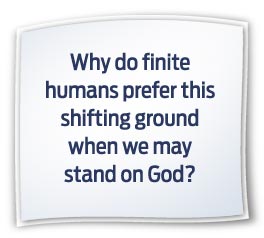 By Lael Caesar
The proper study of mankind is God.1 The core of the word “epistemology” is the Greek verb “stand” (histemi). And its beginning is the preposition “upon” (epi). So that epistemology, concerned with the what and how of knowledge and knowing, is really about whether we stand on solid ground or shifting sand. Biblical revelation answers that knowing is sound if we will listen to God. We know our origins and our reason for being (Gen. 1:26-28), we know the why of our present state (Gen. 3:1-6; Rom. 5:12) and the how of our destiny (John 3:16; Rev. 21; 22), because God tells us. Because of revelation we know that humans are creatures blessed with the power of choice (Gen. 2:15-17), endowed with intelligence (Gen. 1:26-28; Ps. 8:5), and created to stand on God (2 Cor. 10:5; Col. 2:8).

Somewhat perplexingly, many exercise their powers of choice to earnestly oppose belief in choice. Some even use reason to prove life’s meaningless. Rejecting purpose, they choose a platform of . . .

In 1997 Richard Lewontin wrote in frank mode about knowing, science, evolution, and acquired characteristics. He spoke of “well-established and respectable geneticists” who in the 1930s believed that organisms could bequeath environmentally induced changes to their offspring. These changes were known as “dauer-modifications.” But the advancing science of genetics, “with its definitive rejection of any possibility of the inheritance of acquired characteristics,” consigned dauer-modifications “to the scrapheap where they still lie, jumbled together with other decommissioned facts.”2

In 2011 Science Daily, “your source for the latest research news,” reported that “Columbia University Medical Center (CUMC) researchers have found the first direct evidence that an acquired trait can be inherited without any DNA involvement.”3 The “scrapheap” of “decommissioned facts” is colorful language. But stuff from its discarded jumble is today’s cutting-edge scientific discovery.

So. We welcome the finding. But doing no more may be scientific presumption. It would be ignoring fundamental truth and refusing to reflect on and learn from the tragedy of misdirected intellect. Why do finite humans prefer this shifting ground when we may stand on God? He who knows our frame and beginnings means to be with us always, to the end of the world if we will (Matt. 28:20), if we choose to have Him guide our learning, our interpretation, and our extrapolation. The tragedy is that some elect instead to argue life’s meaninglessness, assigning themselves the role of figuring things out without the need for His counsel, guidance, or companionship.

And what is the result of striving for “correct material” (i.e., “scientific”) explanations? As Lewontin himself concedes: “It is not the truth that makes you free. It is your possession of the power to discover the truth. Our dilemma is that we do not know how to provide that power.”4 No wonder, since we reject the only true means, the gift of saving faith that accesses God, and eternal life in His Son (Rom. 12:3; John 17:3). Determined seeking for “correct material” explanations of everything is building on shifting sand (Matt. 7:26, 27) and planning for a great and tragic fall. The proper study of mankind is God. Knowing Jesus is knowing the truth, for He, the unchanging truth (John 14:6), is our proper study. Objective, antisupernaturalist consideration of inanimate objects—blocks, stones, and worse-than-senseless things—will never grant to searching humans the power to know liberating truth. Studying nature in the light of the God of Calvary will. The proper study of mankind is God. n

____________
Lael Caesar is an associate editor of the Adventist Review who enjoys praising God in every possible modulation and tone. This article was published June 28, 2012.