Can Greed Be Beat? 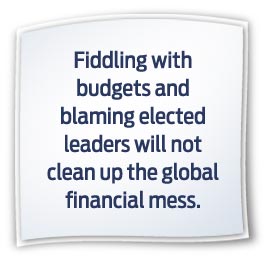 BY LARRY R. EVANS
Selfishness and greed plague every one of us. They are at work through all our waking hours, and even when we are asleep. At least while we are in bed. Prophet Amos lambasted his contemporaries: “You lie on beds adorned with ivory and lounge on your couches. You dine on choice lambs and fattened calves” (Amos 6:4). And Micah was no happier about eighth century B.C. bedtime activity: “Woe to those who plan iniquity, to those who plot evil on their beds! At morning’s light they carry it out because it is in their power to do it” (Micah 2:1). Selfishness and greed are evident everywhere. The world today staggers under a global financial crisis edging some nations to bankruptcy’s brink. One tragic factor, “subprime lending,” essentially means some people wanted more than they could afford, while others were eager to take advantage of them. That oversimplification does not diminish the greed that featured in this disastrous drama.

Fiddling with budgets and blaming elected leaders will not clean up the global financial mess. How we see it determines to a large part how we will go about resolving it. One religious group has even offered to serve as the world bank. While lawmakers debate solutions, others protest in the streets. Their central issue is the denunciation of greed. And as Wall Street occupiers have found sympathizers around the world, we contemplate a pressing question: “Is there a role for the church here, or do we stand by watching the world self-destruct?” God’s last message for the world includes riveting insights into our global dilemma. As Gabe Lyons notes, focusing on humanity’s fall and redemption is telling only half of God’s story.1 Critical to God’s full story are the bookends of Creation and restoration. And all four parts of God’s greed-beating gospel story can be found in the three angels’ messages of Revelation 14:6-12.

Creation
As Genesis 1 reminds us, we were created in God’s image. And the God who first reveals Himself to humans in Creation’s gifts defines the Trinity’s self-knowledge quite clearly in redemption’s sacrifice. As Jesus says: “The Father knows me and I know the Father—and I lay down my life for the sheep” (John 10:15). Creatures who reflect the image of this God will naturally fill the earth with their own giving and sharing (Gen. 1:28). The Creation story is much more than an account of sequential days of omnipotent action. And its crescendo summons not to action, but to celebration by rest. God’s rest on that first Sabbath came not from tiredness, but rather as a means to provide an opportunity for His creation to awaken to the reality of life in the arms of an omni-caring Creator-God. It was a gift of relationship for now and always (Isa. 66:22, 23). And its symbolism holds critical insights for an abiding relationship with God during times of crisis.

The Creation account centers not on the created, but upon the Creator. No wonder, then, that in anticipation of a last-day crisis, the first angel’s message calls us back to “worship him who made” us all (Rev. 14:7). God, not the creature, must be the center. Greed-driven, self-centered creatures need this reorienting, humbling truth.

The Fall
At the Fall humans became the focus of worship. Strange as it seems, that tragic disorientation began before humanity, with Lucifer’s fall in heaven. Personal ambition drove his rebellion, birthing mysteriously, in a creature, the desire, the will, to be worshipped as Creator (Isa. 14:12-14). Today, in the game of basketball, there is one player on the team called the center. Almost invariably the two of them are the largest human specimens on the court. And perhaps one can play at center in a game. But creatures’ awkward craving to be life’s center has poisoned every generation of humanity since Eden’s fall. God’s heart has been filled with pain (see Gen. 6:6). He acted in Noah’s day to save whosoever willed. And He is acting again, one more time before the end. In anticipation of His final judgment action the second angel of Revelation 14 calls us to recognize the difference between His selfless way, and all those behaviors and systems of greed that urge the worship of the creature rather than the Creator who is blessed forever (Rev. 14:8; Rom. 1:25).

Redemption
When God instructed Noah to build an ark, it indicated his plan to execute not only judgment but also salvation. Redemption is central to the call to “come out” of Babylon (Rev. 18:4). The dispersion of peoples at the Tower of Babel by confounding spoken language can buy only so much time. Selfishness has an insidious and contagious character. It knows no natural boundaries. However, in the midst of selfishness and greed, God acts with amazing selflessness. Despite the abandonment He felt when deserted by Adam and Eve, despite the loneliness of being spurned by generations of people who carried His name, He never ceases to give Himself. At Calvary, for all to see, selflessness hung nailed by the hands of selfishness. No clearer demarcation could be found. Selfishness had met its match. All may see. And choose. And, as in Noah’s day, the final judgment that sweeps away the wicked secures the righteous. An earnest “last call” goes out. Grieving for the fallen, God can but appeal. His message is universal in scope, going to every segment impacted by the divine intervention at the Tower of Babel—to “every nation, tribe, language and people,” with its word of hope and judgment (Rev. 14:6). Between its proclamation and fulfillment, those who say yes wait for His coming.

Restoration
As God’s image, first formed in Genesis, is reformed in His last-day people, the line of demarcation between greed and selflessness becomes ever clearer. Pronouncements by prophets of old now echo in shouts of protest from the streets of the world’s megacities, against the injustice and exploitation of Amos’ and Micah’s complaints. But governments and protesters will find no antidote for the soul cancer of selfishness and greed while they seek it in creaturely will, economics, legislation, and government. All such external solutions remain inadequate. Only Genesis restored can defeat human greed. A new heart, a new spirit, like that given in Eden, is the only solution (Eze. 11:19; 2 Cor. 5:17). The old Eden message with renewed zeal, in the witness of our own transformed lives, is to be heralded to every nation, tribe, language, and people in self-forgetful ways that will undo all of ancient Babel’s separations. The angel message announces the ultimate witness to the restoration of God’s Eden image in humanity as a people turned completely away from self to obedient adoration of Him alone, as their Creator and Lord and object of their trust (Rev. 14:12). The program of their lives will demonstrate it, whether in the intensity of their passion for service, or the unfathomable serenity of their rest in Him. It will be seen that their material genius and intellectual resources are turned, not to the aggrandizement of self, but to the glory of God. Their faithfulness with mint, anise, and cumin will only match their graciousness with the weightier matters of the law, justice, mercy, and faith (Matt. 23:23; Luke 11:42). By continually faithful cooperation with their God in giving of self, time, tithe, talent, and all, they will so starve out greed, selfishness, and covetousness that it will die.2 The beauty of holiness savored in their selfless company will draw souls “from all languages and nations” to say, “Let us go with you” to heaven, because we can tell “that God is with you” (Zech. 8:23).

____________
Larry R. Evans is an associate director of the Stewardship Department at the General Conference of Seventh-day Adventists, and editor of the magazine Dynamic Steward. This article was published June 28, 2012.