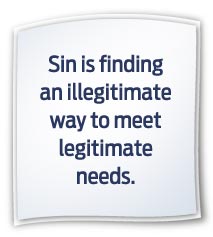 By EDSEL CADET
This devotional article was originally presented at Andrews University’s Fusion vespers program on April 13, 2012. Some elements of the oral style have been retained.—Editors.

Abeard is something I’ve wanted for a long time. It wasn’t easy going through high school and college with a baby face. Then it finally happened—and I am now the proud owner of a beard! You may laugh, but you need to understand that I am 25 years old, and it took a long time to reach this milestone.

I’m the youngest of four, and one day I asked my brother how he had such a beautiful beard. He told me it didn’t start growing until he was 25. My dad said the same thing happened to him—25 was the magic number. So when I was 24 years old, with no hair on my face, I knew there was still hope.

I was learning the important lesson that, like it or not, things are passed down from your family. You cannot escape the hereditary traits, the genes that flow through your blood, the things that cause you to look like your mother or father. What was inherent in your parents, is now inherent with you. I have my mother’s eyes and my father’s nose. I couldn’t escape it. It is what it is.

We are destined to reflect traits from our parents. We reflect not only the physical traits of our family, but also the personality traits found in our genetic family.

In the well-known Minnesota Twin Family Study, Thomas Bouchard examined identical twins reared in different families. For most of the traits measured, more than half were found to be genetically influenced, leaving less than half determined by home environment and other life experiences. Although the findings point to the strong influence of genetics, family environment still shaped some aspects of personality.

The Apple Tree
Whether environmental or genetic, the apple doesn’t fall far from the tree—an old adage meaning that you won’t be much different from your parents. Whatever’s in the roots will be produced in the fruit—and you are the fruit. Even if that fruit falls off the tree, it will not fall far from its roots. What your mother was like, you will be like. What your father was like, you too will be like.

This is true not only with our physical appearance and personality, but also with our spiritual lives and our struggle with sin, because traits pass along not only physically or socially but also spiritually.

There may be some temptation we have struggled with for many years and just can’t seem to overcome. We tell ourselves, “I’m struggling with pride, lust, cheating, or lying,” whatever it is, and view it as if it’s only our own individual struggle, failing to realize that there are such things as generational curses.

Sins of the Past
In the Bible we find texts such as Lamentations 5:7: “Our fathers have sinned and are not; and we have borne their iniquities” (KJV). We have taken on their iniquities. In Exodus 34:7 God is described as “keeping mercy for thousands, forgiving iniquity and transgression and sin, and that will by no means clear the guilty; visiting the iniquity of the fathers upon the children, and upon the children’s children, unto the third and to the fourth generation” (KJV).

That means that most likely you’re not the first in your family to struggle with what you’re struggling with right now. It’s likely that your parents and grandparents grappled with the same temptation.

Consider this: If the enemy assigns one demon to your family, and that demon watches your family from generation to generation, and it knows that you not only look like your father but also act like your father, he now has a better understanding of how to tempt you. He can pull from not only the database of your own past experiences but also the past experiences of your father, and your father’s father—how they related to certain temptations, and what made them fall. Each day we wake up and try dealing with that particular temptation, not realizing that it carries behind it so much weight, so much history, so much research that has been done into your personal and spiritual life.

Living or Dying
So what does God expect? Does He really expect me to undo generations of sin? Can God honestly expect that my life will change, after science has shown, and after my own spiritual walk has shown, that the apple doesn’t fall far from the tree? How can I be any different? How can I live any differently?

God’s Power Resurrects
From the book of Revelation we know that there will be two resurrections—the first will be the resurrection of those who love the Lord and have followed Him; the second will be of those who didn’t love Christ and were not obedient to His ways.

Here is a point to ponder: God is going to resurrect those who loved Him as well as those who did not. That means that God’s ability to raise someone from the dead is not contingent upon his or her spiritual life. Whether you’re wicked or not, you will be raised again!

Raising the dead is not hard. Raising from spiritual death to spiritual life? Now, that’s difficult, because the only thing in the universe that has rebelled against the Word of God—besides Satan and his imps—is the human heart. The difficulty we have is learning to die with Christ.

Christ Died Before the Cross
Many of us think about Christ dying on the cross, but the truth is that Christ died way before the cross. Every morning that Christ rose He died to sin. He took on human flesh, He took on human nature, and He died each day to the things we so easily live for.
The function of the cross is not to give us power to live a righteous life, but rather to blot out our past sins. The cross is there for the blood to flow to wipe away our past, whereas the resurrection is the only thing that empowers us to live a holy and righteous life. Christ is now seated in heavenly places, and He says that we are seated there as well. That’s what empowers us to live a holy life, so that where He breathes we breathe, and how He lives we live as well.

“And you were dead in the trespasses and sins in which you once walked, following the course of this world, following the prince of the power of the air, the spirit that is now at work in the sons of disobedience—among whom we all once lived in the passions of our flesh, carrying out the desires of the body and the mind, and were by nature children of wrath, like the rest of mankind. But God, being rich in mercy, because of the great love with which he loved us, even when we were dead in our trespasses, made us alive together with Christ—by grace you have been saved—and raised us up with him and seated us with him in the heavenly places in Christ Jesus, so that in the coming ages he might show the immeasurable riches of his grace in kindness toward us in Christ Jesus” (Eph. 2:1-7, ESV).2

Sitting in Power
I don’t know if you’ve ever had the privilege and honor of wielding the power of someone greater than you. I have. When I was 20, I walked into Congressman Gregory Meeks’ office for an interview and got an internship. Gregory Meeks is the U.S. representative for the sixth congressional district of New York City. One week into my internship a regular employee quit, and I was promoted to his position.

I was 20 years old, making phone calls: “Hi, my name is Edsel Cadet. I’m calling on behalf of Congressman Gregory Meeks.” I was still a student, my professor could easily fail me, I was still financially dependent upon my parents, still very much susceptible to everything that most young people my age face. But because I was calling on behalf of a U.S. congressman, practically sitting in his seat, I was able to call the shots: “I need this done as soon as possible. Please expedite this—get it done immediately.” People on the phone had no idea I was just 20. They had no idea that in the evening I was going back home to my parents! If I ever made a phone call like that from my cell phone, people would just laugh, but because I was in the seat of Congressman Meeks, calling on his behalf, I had power that was not mine!

So when we read in Ephesians 2 that God made us alive together with Christ, raised us up together and made us sit together in heavenly places in Jesus Christ, this means that when the enemy comes and he wants to tempt me with what my grandfather, with what my father, with what I’ve been struggling with for years—I can rebuke him, because I’m seated in heavenly places. Not only did Christ die for us, but because He is alive, that means that our future can now be different!

What is the deep sorrow of God? To come here to die, then to live again, so that we might live again as well—and for us to choose not to accept that gift and power. Have you ever been in a situation where you could have helped someone and all you needed for them to do was to ask, but they didn’t ask? Your hands were tied—you couldn’t do anything for them until they acknowledged their need.

The Attractiveness of Sin
Why do we sometimes find temptations attractive? Because Satan is cruel. He takes a real need, twists God’s way of meeting it into something illegitimate, and tempts us with what appears to be an easier, quicker fix. Sometimes we don’t trust God to meet our legitimate needs in His better, more satisfying, legitimate ways.

Sin is finding an illegitimate way to meet legitimate needs. For example:

The apple doesn’t fall far from the tree, and we are often tempted by what our predecessors found tempting. But the good news is that when Christ died and rose again, He changed the tree. He offers to graft us into His tree—a tree that is rooted in heavenly places. So now your heavenly Father’s tree can become your tree. Now the Son’s tree can become your tree, and the character that He embodies, that He lives, now lives through you.

Together With Christ
Each day that Christ was on earth He made a conscious decision to place His life and needs in the hands of His Father. He never sinned. Every time we sin we’re trying to meet a need that God was looking to fill in a much better way. He longs to satisfy all our needs—to feel safe, to enjoy intimacy, to have the peace that passes understanding.

God has the power to take us sinners and transform us into His likeness. “Even when we were dead in our trespasses, [God] made us alive together with Christ” (Eph. 2:5, ESV).

Even when we were dead in our trespasses. Even when Christ saw us, from eons past, and knew the foolish things we would do, He, knowing that, made us alive together with Christ— and raised us up! He offers us a new tree—a tree of life, that we may sit together with Him in heavenly places, rooted and grounded in His power and love.

_________
1 Texts credited to NKJV are from the New King James Version. Copyright © 1979, 1980, 1982 by Thomas Nelson, Inc. Used by permission. All rights reserved.
2 Scripture quotations marked ESV are from The Holy Bible, English Standard Version, copyright © 2001 by Crossway Bibles, a division of Good News Publishers. Used by permission. All rights reserved.

____________
Edsel Cadet is an M.Div. student at the Seventh-day Adventist Theological Seminary at Andrews University in Berrien Springs, Michigan.  This article was published June 28, 2012.