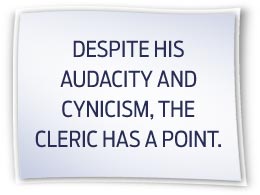 Cliff Goldstein
In the greatest chapter (“The Grand Inquisitor”) in the greatest novel (The Brothers Karamazov), by one of the West’s greatest novelists (Fyodor Dostoyevsky), Jesus Christ returns to earth, not in heavenly glory on bright clouds of angels, but “in that human shape in which He walked among men for three years fifteen centuries ago.” The time and place of this advent are awkward for the church: Seville, Spain, in the sixteenth century, where “the day before almost a hundred heretics had, ad majorem gloriam Dei, been burned by the cardinal, the Grand Inquisitor, in a magnificent auto da fé, in the presence of the king, the court, the knights, the cardinals, the most charming ladies of the court, and the whole population of Seville.”

The crowds are enthralled. Jesus “moves silently in their midst with a gentle smile of infinite compassion.” After He heals someone blind from birth, children throw flowers at His feet. When a funeral procession carrying a young girl sets the coffin before Jesus, “His lips once more softly pronounce, ‘Maiden, arise!’” and she does.

The Grand Inquisitor “sees everything; he sees them set the coffin down at His feet, sees the child rise up, and his face darkens.” As he approaches, the crowd cowers in fear as he has Jesus arrested and taken away.

That night, while Jesus (sometimes called the Prisoner) sits in the dungeon, the Grand Inquisitor comes to Him and says, “Why, then, art Thou come to hinder us? . . . Tomorrow I shall condemn Thee and burn Thee at the stake as the worst of heretics. And the very people who have today kissed Thy feet, tomorrow at the faintest sign from me will rush to heap up the embers of Thy fire.”

The Grand Inquisitor then begins to lecture Christ on His mistake of giving human beings freedom. “Instead of taking men’s freedom from them,” he declares, “Thou didst make it greater than ever! Didst Thou forget that man prefers peace, and even death, to freedom of choice in the knowledge of good and evil? Nothing is more seductive for man than his freedom of conscience, but nothing is a greater cause of suffering.”

Despite his audacity and cynicism, the cleric has a point. Look at what humans have done with their freedom. Pain, evil, sin, suffering, death—all have arisen from freedom, or from the abuse of it. No wonder Jean-Paul Sartre wrote, “Man is condemned to be free.” Condemned because we have used the gift of freedom to turn ourselves into the miserable slaves of passions that we don’t understand and to create systems that manipulate us through powers that we can barely resist. Then, condemningly, the Grand Inquisitor asks Christ if He didn’t know the terrible things that would happen if humankind were “weighed down with the fearful burden of free choice.”

Of course Christ knew. But He gave us free choice anyway because humans could not love if they didn’t have freedom (a love that is forced is not love), and love was too important a component to be left out of the human condition. The Grand Inquisitor was right: freedom brought suffering. But for Christ this cost was worthwhile, even though He knew from “before the foundation of the world” (Eph. 1:4, NKJV; see also Titus 1:1, 2; 2 Tim. 1:8, 9; 1 Peter 1:18-20) that this cost would be Him, on the cross, bearing in Himself the pain and sorrow of all fallen humanity (Isa. 53:4).

After a long harangue the Grand Inquisitor says that he is going to burn Him at the stake. Then, after he finishes speaking, he waits for Jesus to respond, to say something, “however bitter and terrible.” Jesus, silently, rises. “He suddenly approached the old man in silence and softly kissed him on the forehead. That was His answer. The old man shuddered. His lips moved. He went to the door, opened it, and said to Him: ‘Go, and come no more. . . . Come not at all, never, never!’ And he let Him out into the dark alleys of the town. The Prisoner went away.”

Love, apparently, was a power that the Grand Inquisitor couldn’t understand or, obviously, prevail against.

____________
Clifford Goldstein is editor of the Adult Sabbath School Bible Study Guide. His latest book, Shadow Men, was recently published by Signs Publishing in Australia. This article was published June 21, 2012.