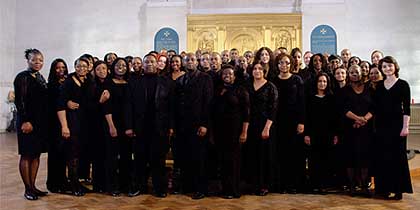 Two special editions of the BBC 1 program, Songs of Praise, have had a specific emphasis on Adventist music. The first, broadcast on Sunday, May 20, was on the theme of Spirituals, whose messages align with the Adventist message, as they focus strongly on the themes of leaving earth, and being in heaven. Whilst born out of the slave trade ? spirituals are, in fact, everyone's story, as we all long to 'ride in that chariot', we all want to 'see our Lord', and we can all find comfort in the 'Balm In Gilead' that makes the wounded whole and heals the sin-sick soul.

The second program, broadcast on May 27, was on the theme of Pentecost. This edition was recorded with a congregation which was about sixty per cent Adventist, and is based much more on gospel songs and hymns such as 'Revive Us Again', 'Soon and Very Soon', and 'There's A Sweet, Sweet Spirit'.

In Songs of Praise tradition, dialogue accompanies the music. The British Union’s communication department submitted some potential stories, and one regarding an Adventist who is singing bus driver, resonated with the program’s researcher. Singers in the choir were also interviewed from a singer's point of view.

The congregation was joined by two Christian singers ? Kym Mazelle, originally from Gary, Indiana. She grew up around the corner from the world-famous Jackson family. Formerly a singer of high-energy club music, called 'house' music, she had an encounter with the Lord. Having worked with her on a few occasions in the past, I can truly say her love and enthusiasm for the Lord is strong. She called me the day before the recording simply to let me know she was praying for the Lord's blessing on everyone involved, stating that she didn't feel she would be able to sleep that night she was so full of joy.

The programs were filmed at St John-at-Hackney church, and the Pentecost program included five musicians, headed by Adventist musician George Acquah on keyboards along with Andy Kydd, from the Newbold Moor Close worship team, playing guitar.

\Across the two programs, four Adventist artists or groups are featured: Tessera, a male quartet comprising of Bobby Carr, Paul Lee, Paul Boldeau and Ken Burton. The quartet was actually set up for Songs of Praise performances and has had a wonderful relationship with the program; Jeharna South, from Wolverhampton who sings in both programs; and Resurrection, a female quartet based around current and former members of the London Adventist Chorale.

The main performing group for both programs is the Adventist Vocal Ensemble (AVE). The ensemble has performed, either solo or in collaboration, nearly two hundred and fifty different songs spanning a decade of Songs of Praise programs. It is a regular choir on the annual Songs of Praise Big Sing from the Royal Albert Hall and is called the 'resident choir' of BBC Radio 2's Good Morning Sunday, with Aled Jones.

The ensemble for this show is the largest collection of singers it has ever used ? just under fifty. The result is truly special, moving from the heartfelt sustained a cappella spirituals to the uninhibited joyful expression of the gospel repertoire. The BBC crew continually comment that they always look forward to working with the singers.

Ken Burton was been intrinsically involved in the two programs. He said,

"These are not programs on Adventism or Adventist music per se, but most of the voices, items, and some of the interviews, are from our churches. This is a historical moment for the Church. Never before have so many minutes on the national television airwaves been dedicated exclusively to the sound of Adventist voices."

The programs are available on the BBC iPlayer website: www.bbc.co.uk/iplayer.

The songs are available for purchase, in digital format, from www.adventistvocalensemble.com, and iTunes.