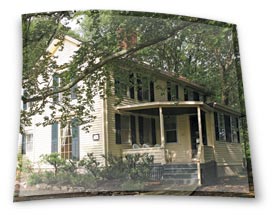 BY SANDRA BLACKMER
Whether you’re planning a vacation this summer in North America or elsewhere, consider fitting into your itinerary some historic and other Seventh-day Adventist sites. There isn’t space here to include all church-related places of interest, but we’ll highlight a few that you might find intriguing. For those that provide tours, you’re encouraged to call ahead.

New England and New York
Seventh-day Adventism first took root and sprung up in northeastern United States, resulting in a rich church history in that region. More than 60 Adventist landmarks dot New York and the New England states of Maine, Massachusetts, New Hampshire, and Vermont, and are worth visiting. Here are a few.

2 Joseph Bates’ Boyhood Home, Fairhaven, Massachusetts—Joseph Bates was born in Rochester, Massachusetts, on July 8, 1792. One year later the family moved into the home they called Meadow Farm in Fairhaven, where they lived until 1835. Address: 191 Main Street. Tours available. Phone: 774-328-8882.

3 Washington, New Hampshire, Seventh-day Adventist Church/Sabbath Trail—The Washington, New Hampshire, church is the earliest Sabbathkeeping Millerite church that is still an Adventist church today. The white clapboard, gable-roof building seats about 120 people and boasts a small but still-active congregation that meets there from April to October. During the winter and other inclement weather the road to the church is impassable. The Sabbath Trail winds through the woods behind the church. Thirty-one granite stones along the trail trace the history of the Sabbath from Creation to the present. Address: 153 King Street. It may involve a 10-minute walk on uneven surface to reach the church. Web address: http://washington.netadvent.org.

Brackett Street School, Portland, Maine—Ellen Harmon likely received her early formal education in a wooden schoolhouse on Brackett Street near her home on Spruce Street (home no longer in existence). The school building was first erected in 1828, and replaced with a brick structure in 1836—about the time that a student at the school threw a rock at Ellen, causing her face injury. Fire destroyed the brick building in 1852, but it was rebuilt and enlarged. Builders used some of the bricks from the old structure to construct a third story. Address: 155 Brackett Street.

5 Birthplace of Annie and Uriah Smith, West Wilton, New Hampshire—Annie and her younger brother, Uriah, were born in a tavern owned and operated by their parents, Samuel and Rebekah Smith. Annie was born on March 16, 1828, and served in the publishing work with James White. Her literary talent was evident in the numerous poems and hymns that she wrote. She died of tuberculosis in 1855. Uriah served as editor of The Advent Review and Sabbath Herald (now the Adventist Review) for many years. Address of Smith tavern: West End Highway, Wilton.

6 William Miller Farm, Low Hampton, New York—The Miller farm, a chapel (built by Miller in 1848), and Miller’s gravesite are located just across the border from Vermont. It was here that Miller first studied and began to share his views on the prophecies of Jesus’ second coming, which led to a dramatic spiritual revival in New England and eventually to the beginnings of the Advent movement. Ascension Rock, where many Millerites waited for Jesus to come on October 22, 1844, is located between the home and the chapel. Address: 1614 County Route 11, Whitehall (Low Hampton). Tours available. Phone: 518-282-9617.

7 Hiram Edson Farm, Port Gibson, New York—The Edson farm is generally referred to as the theological birthplace of the Adventist Church. Following the disappointment in October 1844, Edson was walking through a cornfield when the Lord gave him insight on the heavenly sanctuary and the high-priestly ministry of Jesus—which helped the discouraged believers to understand why Jesus didn’t come when expected. Though the original house and barn are gone, Adventist Heritage Ministry has reconstructed a similar vintage barn on the site. Address: 780 Field Street, Clifton Springs (Port Gibson). Phone: 315-462-1844.

California
Elmshaven, Home of Ellen G. White, St. Helena—Ellen White purchased Elmshaven in 1900 and lived there until her death in 1915. Today, the home is furnished much as it was when she lived there. Many of the furnishings actually belonged to her. Address: 125 Glass Mountain Lane. Tours available. Phone: 707-963-9039.

Florida
A Key Encounter, Key West—Stop by A Key Encounter, located in the Clinton Square Market Mall in the Mallory Square area of Key West, and view a breathtaking panoramic nature video developed from a creationist worldview as well as a video depicting the second coming of Christ in the planetarium. Then stroll down the Jungle Walk and browse the gift shop for educational, creation-oriented books, games, and toys. Don’t forget to meet Peaches the cockatoo and her other exotic bird friends, who will be delighted to greet you. Address: Clinton Square Market Mall, upper level, 291 Front Street. Phone: 305-292-2070.

Abroad
Here are a few Adventist Church sites outside North America you might consider if you’re traveling abroad.

Contact the local conference, union, or division office in the region of the world you plan to visit while your trip is still in the planning stage and ask for information about Adventist sites of interest in their area. Then, if possible, include visits to them in your itinerary.

Taking the opportunity to connect more closely with our Adventist roots helps us gain a better understanding of and appreciation for the way God has led His church in the past, and will increase our confidence that He will continue to love and lead His people today and into the future.

____________
* Information for the historic Adventist sites in New York and New England was taken from Merlin D. Burt, Adventist Pioneer Places: New York and New England (Hagerstown, Md.: Review and Herald Pub. Assn., 2011). This is a very interesting book that is chock-full of photos and historical information. It includes not only contact information for the more than 60 historic Adventist sites but also their GPS coordinates. You can purchase this book at your local Adventist Book Center or online at www.adventistbookcenter.org.