IN A DAY REDOLENT WITH NOSTALGIA AND ANTICIPATION, employees, friends and leaders of the Seventh-day Adventist Church's Casa PublicadoraBrasileira, or CPB, inaugurated a new administration building -- and rededicated themselves to making it unnecessary.

If that sounds like a contradiction, it isn't, explained Pastor Erton Köhler, South American Division president. However well appointed andcongenial the new 263,715-square foot (24,500 square meters) building is, the goal of the publishing work is to hasten the return of Jesus, whenpreaching and publishing would no longer be necessary.

"Normally when you have an inauguration, usually people say we hope God continues blessing you for another 110 years," Köhler said. "But I would like to say that if we are blessed by the Lord we will not be here for another 110 years, but we are doing something so that the Lord may come here sooner and we can celebrate with Him in Heaven."

The new facility updates and expands the highly visible--and massively productive--CPB, whose books, magazines, music recordings and school textbooks have a wide popularity in the Portuguese-speaking world, going beyond Brazil to the "motherland" of Portugal, to Angola and Mozambique and the Cape Verde Islands. CPB's school textbooks are so highly valued, officials said during a tour, that many of Brazil's public schools buy and use them, alongside the many Adventist academies in the nation. There were 1,267,468 members of the Adventist Church in Brazil at the end of  2010, according to the world church's Office of Archives, Statistics and Research.

Pastor Ted N.C. Wilson, General Conference president, praised the CPB's workers and retirees for their service, and for its results.

"In a very appropriate and humble way, I want to say the world church is proud of what you do," Wilson said. "Your work with the educational [text]books is tremendous. The books that are provided church members for spiritual growth is tremendous.'

For Wilson, joined by his wife, Nancy, the visit was also laden with emotion: a little more than 25 years earlier, in January 1987, Wilson's father, the late Neal C. Wilson, then-president of the world church, inaugurated part of the CPB complex which had just been completed. For the 2012 ceremony, the younger Wilson used the same long "editor's shears" his father had used to cut the ribbon at the new building. Moving quickly, CPB employees placed those shears and photos of the 2012 and 1987 ribbon-cutting ceremonies in a display the Wilsons saw as they continued to tour the property.

"As we re-inaugurate this fantastic publishing complex, may it be a signal to the South American Division and to the world field, that each of us have rededicated our lives to that wonderful event, when we shall see Jesus coming in the clouds of heaven, accompanied by every angel from heaven, including the angel who comes down and provides the publishing power," Wilson told CPB employees.

The CPB campus in Tatuí is only the latest in a series of "homes" for this publishing house, which first began in the city of Rio de Janeiro in 1902. Locations moved, finally ending up in Santo André before the relocation to Tatuí. Longtime veterans of the CPB work, now retired, marveled at the changes.

Wilson Sarli, former two-time CPB director, was almost at a loss for words. Under his management, the publishers made several important moves, in particular the relocation to Tatuí. "The only thing that comes to mind, at this time, it is sure that God's hand guided our work," he said.

At the ceremonies, other retired employees were thrilled to reunite with former workmates, who also became lifelong friends. They were impressed with the expansion and modernization of not only the 24,500 m² (263,715 sq ft), but also the whole complex, as the Ferreira brothers, Elias and Marcio Gabriel, said.

Thirty-three year veteran CPB employee Marcio Gabriel Ferreira recalled: "I started in Santo André. Then we came here. ... I feel special to be part of the development of the institution. "

And Elijah Gabriel Ferreira, his brother, added: "Seeing the publishing house expanding is something wonderful. It was the greatest privilege of my life to work here for over twenty years. My greatest privilege was being the first worker to set up a Bible-printing machine here." CPB prints Bibles for Adventist lay members and pastors throughout thedivision.

To Ruth Pereira Barbosa, the place that most caught her attention was the new reception area. And no wonder, since it was as the receptionist that she wrote her work history at CPB.

"The CPB reception area was my second home for thirty years. Everything now is wonderful! It is with joy and great pride that I tell everyone that I was part of the staff here. Too bad, in my time, the reception area was not as beautiful as we are seeing today," she said, smiling.

And it wasn't only employees who have fond memories of CPB's work. One of Brazil's leading businessmen, Gold Cross insurance founder Milton Afonso, 91, spoke of the special meaning CPB had in his life: "I was a colporteur (literature evangelist) for many years. Starting in 1936, I sold books published by CPB. If it did not exist, I would not have begun to progress in life, and I might still be living in my small town in [the state of] Minas Gerais."

But along with the celebration, the man who has day-to-day responsibility for CPB knows his goal is to be put out of business by Jesus' return.

"It is with great excitement and a sense of urgency that we continue the difficult work begun by the pioneers," said Pastor José Carlos Lima, CPB director. "But we were happy to see that not only the mind but also the heart of each worker is prepared to complete the mission through the ministry of the printed page. Thus, we hope that Christ comes back soon." 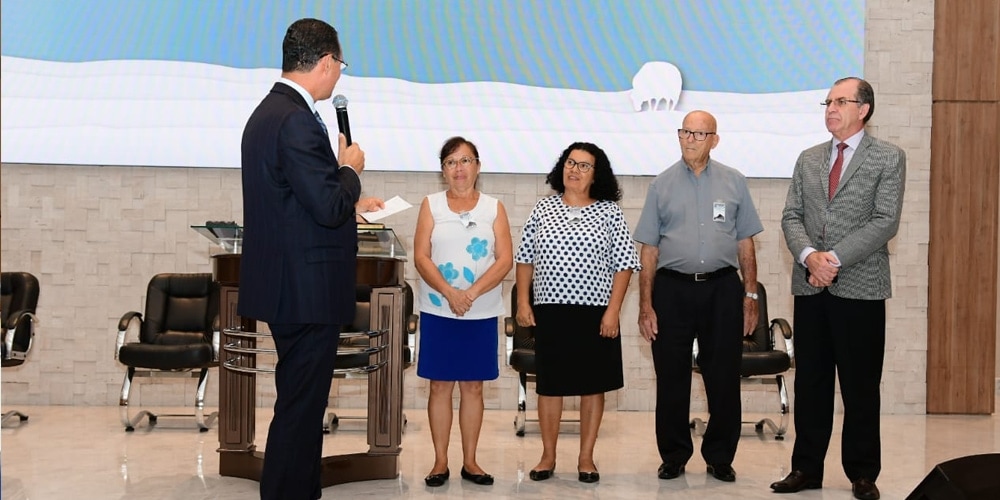