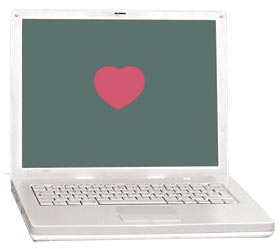 Match.com is very professional looking; it has a strong color theme, good design, and an efficient profiling process. I started feeling like one of many as I began using the site, but that was overcome by giddiness when my in-box filled up with such subject lines as “You caught his interest!” and “He winked at you!” This Web site is super-flirtatious—part of what probably makes it so successful.

My profile made it easy to weed out guys I wasn’t interested in, but still have plenty of options at the end of the day that met “my criteria.” I could even wink back at any man I wanted to, which I did to all 17 in the first week. Match.com let me view a lot of information about users before making me upgrade to an account I would be charged for.

After having some fun on Match.com and getting the jitters out, I moved on to AdventistContact.com to get a more spiritually honed sea of men.

At first glance the site was romantic, with pictures and romantic quotes from happy couples. As I explored it, however, I found it to be less professional and less flirty than I expected.

I’m not a master of Web design, but from the classes I’ve taken, this Web site began looking like one of the bad examples we saw in class, with bare minimum design and colors, too many words all the same size, and very few pictures. I kept exploring, only to become frustrated with the 200 multiple-choice questions that eventually horrified me with such intrusive questions as “How often do you change your undergarments?” and “True or False: There have been times I wished I were dead.” I never anticipated having to initial that I could read and write, or that I have never been diagnosed with a sexually transmitted disease; yet belly dancing was an option on my list of hobbies. It also asked me if I had ever been convicted of a crime more serious than a traffic violation, which, I hope, would weed out some of the “crazies.”

Overall, the entire process of setting up a profile took me three days. My e-mails were a bore, with subject lines that said “You have a match” and “You have an e-mail.” I consider myself fairly conservative, but after using AdventistContact.com, even I felt judged and stupid. Besides, what prospective boyfriend is going to care whether I want contemporary or traditional furniture in my house?

ChristianMingle.com was my last victim, and by the time I got to it I was filled with dread. Thankfully, I had no reason to be, because the entire process took about five minutes. The Web site was professional and easy to use. It had some fun elements, such as rating other users’ pictures and telling me I had a secret admirer. But overall it was mediocre in its entirety.
Match.com was by far the largest and most professional Web site. However, I felt as though I could get lost among the thousands of users, many of whom were not Christian, much less Adventist.

Although AdventistContact.com was a traumatizing experience, it was a safe Web site with options that I was comfortable were all already Adventist.

If you’re looking for something neutral that helps you find other Christians, ChristianMingle.com has nothing too extreme, and still has plenty of options.

________
Jaime Jacobson is a junior journalism major at Southern Adventist University. This article was published May 17, 2012.

The Life of Faith
I Believe That We Will Win