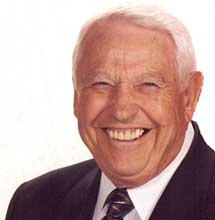 Was longtime missionary in South America (Posted May 10, 2012)

Fernon Retzer, Sabbath School Department director at the Seventh-day Adventist Church world headquarters in the 1970s and a missionary in South America, died April 5, 2012, in Chattanooga, Tennessee. He was 90.

“Dad was a very positive leader, always smiling, always encouraging, always affirming,” said his son, Gordon Retzer, who served as president of the Southern Union Conference from 2003 to 2011. “He was a caring person who exemplified the gentle spirit of Jesus.”

As a department director the elder Retzer was known for his creative promotion of mission. At large-scale meetings, including General Conference sessions, his mission pageants employed spotlights, flashing colors, and a dazzling globe that sparkled when the house lights were lowered. The entire production of scripts, signs, and costumes would later travel to perform at camp meetings around the United States.

In retirement he continued personal witness, hosting a neighborhood Bible study. A lifelong baker, Retzer would offer each participant a loaf of home-baked bread.

Retzer was born in Bowdle, South Dakota, on November 12, 1921, and moved with his family to Lodi, California. He graduated from Pacific Union College with a degree in theology and pastored in the Northern California Conference. General Conference president R. R. Figuhr preached at his 1948 ordination service.

After serving as president of the Central America Union in San José, Costa Rica, Retzer became Sabbath School director for the Inter-American Division, headquartered in Miami, Florida. In 1966 he became associate director of the Sabbath School Department at the denomination’s world headquarters, before becoming director in 1968.

He later served in the Southern Union Conference in the Sabbath School and Religious Liberty departments.

After retiring in 1986, Retzer worked for four years for Mission Spotlight, a supporting ministry that operated from 1970 to 2007 and highlighted world mission projects through media presentations.

Retzer’s wife, Dorothy, preceded him in death in 2007. He is survived by a brother, Harvey; a sister, Delores Buller; four children: Gordon, Gerry, Doreen, and Richard; and six grandchildren.

—Ansel Oliver contributed to this story