Down the Home Stretch 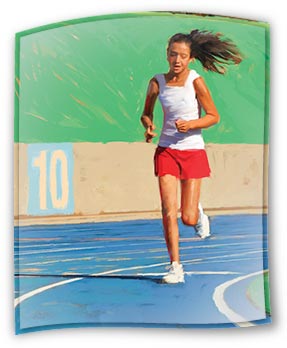 BY HEATHER VANDENHOVENWhen I was in the fifth grade, our school held an annual track-and-field day at the end of the school year. Different classes competed in athletic events: short- and long-distance running, long jumps, the high jump, and others. Each class voted for those it wanted to represent them for the different events, and it was a given that I wouldn’t be one of those elected.

Athletic ability was not my gift. In fact, being as skinny as I was, it was common for me to hear someone refer to me as “toothpick,” or “Heather, Heather, what a feather.”

What Strange Notion?
For some reason, that year I very much wanted to participate in  track-and-field day; I wanted to represent my class. We were nearly done voting on who would compete in each event, and it was down to the last event to be scheduled: the nine-lap run.

As usual, I hadn’t been chosen, and I was about to assume my “just a cheerleader, athletically useless” role. The teacher called for participants for the nine-lap run, and not a hand went up. This was one of the most grueling events, because the field was huge (to us), and running around it nine times seemed crazy! There was no sprinting to glory, or amazing anyone in the long jump. The nine-lap run promised only exhaustion and delayed gratification.

To this day, I still don’t understand what was going on in my brain, but I wanted to do something, and this was the only event left. Up went my hand, and my name was written on the board.

On Your Marks . . .
Track-and-field day arrived the next week. The teachers had their gear: whistles, timers, water bottles, and ball caps. We students were decked out in shorts, excitement, and determination. Parents brimmed with pride and advice. Event after event took place throughout the morning, the nine-lap race being the final event of the day.

I had been advised to pace myself. “You have nine laps to run; don’t try to be a hero in the first three,” others told me. I paced and ran, ran and paced. Each time I ran past the line of classmates and parents, they waved and cheered me on. I was determined to finish this event, even if it meant crawling the last few laps.

I kept going, sometimes walking with that dry “I can’t breathe” feeling in my throat. Sometimes I ran with that “I want to win” feeling in my heart. I finished the third, fourth, fifth, sixth laps. By then I was hot, sweaty, and very red. But little “toothpick” and “Heather the feather” was going on. People on the sidelines asked if I needed to stop. When I said no, they decided to cheer me on and fret later.

As I began the final lap I picked up speed emotionally and physically. As I ran past the sidelines the cheering got louder and I ran harder. Some of the other competitors had long since bowed out; I was one of only two kids still in the race. I could sense my accomplishment as I rounded the last turn and ran toward the finish line. My mom and my classmates were in sight. I crossed the finish line in first place! What a moment! What a feeling!

I was toast, completely out of my league, but I had finished. I had run the nine-lap event, and I had won! I didn’t know if my class would be proud of me, but I was proud of myself. My mom and my teacher ran over to me, looking both proud and prepared to dial 9-1-1. They kept telling me to drink and “walk it out.” Others said, “I can’t believe you did that!”

Finally we all sat down as teachers began to call out the winners’ names and give them ribbons for first, second, and third places. When my name was called, I went up to receive a blue ribbon with my name and event written on the back of it. It was a great moment, but not like the feeling of crossing the finish line a few minutes before.

Eyes on the Prize
Today that ribbon is one of those things you remember when you go to your childhood home. It’s a story to tell your children; a story full of fun and laughter, but also full of honesty and grit. It’s a story of faith, endurance, and will.

Looking back on my childhood, I now realize that I had to feel it all. And somewhere deep in my mama bear’s heart, I know my daughter has to feel it all. Then she’ll become stronger in character and capable in tragedy.

Perhaps Jesus feels the same way. He wants us to take hold of who He is. He knows this world is tough. He knows the laps are long, many, and tiring. They may lead us past divorce court, bank notices of insufficient funds, chemotherapy treatments, unemployment lines, food banks, single parenthood.

But Jesus has been there. It’s why He took a lap past Calvary.

Are we running with the same determination? Are we listening to Jesus’ coaching? “But those who hope in the Lord will renew their strength. They will soar on wings like eagles; they will run and not grow weary, they will walk and not be faint” (Isa. 40:31).

So let’s keep running. Let’s walk when we have to. Crawl when we have to. Stand on the track and breathe when we have to. He’ll carry us when we feel we can’t go on. We will finish. Heaven is cheering us on; the golden streets on which we run the home stretch are almost within sight.

What a finish line!