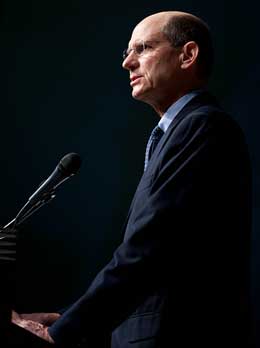 In his keynote address today to the 7th World Congress for Religious freedom, Pastor Ted N.C. Wilson, president of the General Conference of Seventh-day Adventists, challenged believers to grasp the opportunities for open discourse that a secular state preserves.

Although acknowledging the inevitable conflict between the values of believers and that of secular culture, he said: “We have to accept this tension as part of a free society. We have to accept the challenges and find appropriate responses, through God’s leading.”

Wilson drew a distinction between “radical” or “extreme” secularism—which seeks to exclude religion from the public sphere—and “secular governance” which remains neutral between religions and protects the religious freedom rights of minorities.

“If intolerant and ideological secularism attacks our religious values, we have to stand up for them with conviction,” he said.  Wilson cited examples of  where secularism has been taken too far, including attempts to prohibit Muslim girls from wearing headscarves to public school, or to mandate the provision of abortions by institutions that reject the practice as a matter of conscience.

“It’s taken too far when the mention of creation of the world is totally forbidden in the public schools or when Christian agencies for adoption of children are threatened to lose their legal recognition, if they refuse to list as potential parents same sex couples,” he said.

However, Wilson also said that people of faith should reject the temptation to see a “religious state” as an acceptable alternative to secular governance. “If the state gives one religion a privileged legal position, no equality is possible and life becomes a nightmare for those who are different.”

“Which type of society is it that condemns to death someone for apostasy because they have changed religions?” he asked. “Is that a secularized or religious society?”

He said his life-long passion for promoting religious liberty has its roots in memories of his father, Neil Wilson—a former world church leader—who often spent hours with government officials explaining the value of freedom of conscience.