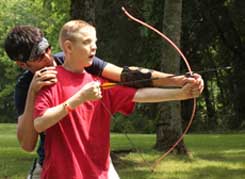 Sometimes in life, things don’t ?unfold according to plan. So it was in early February 2012, when 43 blind campers arrived at Winter Camp Au Sable in Grayling, Michigan, some 200 miles north of Detroit.

What was expected to be an oversupply of “wintery thrills and spills” turned into a bit of a disappointment: there wasn’t any snow, which organizers said was “disappointingly absent.”

What to do? Organizers took campers, who came from the United States and Canada, on an imaginary “cruise” to Alaska, as well as such warmer climes as Bermuda, Mexico, and Hawaii.

“The evening activities gave everyone a taste of each of those exotic places,” said Peggy Hansen, who coordinates National Camps for Blind Children (U.S.A.), a service of Lincoln, Nebraska-based Christian Record Services for the Blind, a Seventh-day Adventist ministry. “But there was enough snow to enjoy some winter activities 50 miles away. These included downhill skiing on Challenge Mountain, as well as snowmobiling and snow-tubing,” Hansen said. “As the campers boarded the bus for home, new snow was falling,” she added.

The winter and summer camps are intended to give blind people a break from their routine, the opportunity to meet new people and form friendships, as well as the chance to learn more about Jesus, who promises the ultimate deliverance from disabilities. Austin Orlando Wilson, a legally blind Seventh-day Adventist, founded Christian Record in 1899. He wanted to provide Christian literature and instructional materials, of which there was a shortage in the late nineteenth century. To do so, he rigged up a clothes wringer to produce—one page at a time—a braille magazine called Christian Record. From an initial print run of 75 copies, the publication grew to a roster of thousands of subscribers by the 1920s. Sound recordings were introduced in the 1950s and continue today.

In 1967 National Camps for Blind Children was formed. That first summer, a camp was held at Camp Kulaqua in High Springs, Florida, with 23 young people attending. Since then, nearly 50,000 campers have attended these special camps.

Among the 43 blind campers who attended the winter 2012 event, 25 came from Canada, according to camp’s organizer, Pat Page from National Camps for the Blind (Canada). The Michigan venue is a convenient spot for campers from across the United States northern border, and is part of a cooperative effort between the Christian Record International office and its Canadian sister organization from Oshawa, Ontario.

Michigan was the site of Christian Record’s only winter camp for blind individuals for this year. Hansen explained, “Our camp planning is conditioned on availability of funding. The economic downturn has affected how many such events are viable for our organization.”

The campers cover their own travel expenses and a $35 sign-up fee, but all else is covered by donations. “We are grateful to our donors for allowing us to organize eight summer camps in the United States this year,” Page adds.

The 2012 summer camp schedule will begin early in June but most camps are planned for July and August. The list of the summer camps for blind persons includes eight events in the United States and four in Canada. (Details can be found online at www.blindcamps.org.) Christian Record officials said they will also reactivate Camp Wakonda at Oxford, Wisconsin, July 1-8.

—with information from Rajmund Dabrowski, assistant to the president for marketing, Christian Record Services for the Blind