Message in a Back Injury 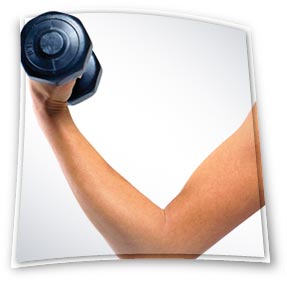 Wilona Karimabadi
It was my usual end-of-the-day workout. I’d found a chest-and-triceps routine on the Internet that incorporated the use of equipment I already had—dumbbells and a resistance band; and with my kids in bed, my TV on low to keep boredom at bay, I set out to give my muscles something to think about.

On the last set, with the final few reps of an overhead triceps extension movement, I felt a weird little twinge at the lowest part of my spine. Nothing big at first, just minor discomfort. No biggie, standing abs will fix it, I thought. These standing abs movements used the science of isolation of parts of the abdominal structure in rotating movements—much like hula hooping but with much smaller rotations. It didn’t make things worse, but it didn’t make anything better either. So I showered and went to bed.

The next morning I couldn’t stand up straight or walk without holding on to something, and I felt as if I were literally broken in half. By the end of the day a visit to my doctor confirmed an injured disk, with the cause unclear. I had now joined the worldwide family of back-pain sufferers. And I didn’t want to belong.

In the four weeks that followed, there was plenty of time to whine and moan and say, “Why me?” In addition to not being able to sit at work, walk at my normal pace, or exercise, I was also finishing my master’s thesis, surviving another family Thanksgiving for which my cooking and baking skills were needed, while trying to bravely face Christmas shopping season. But I also had time to think about what God might have been trying to tell me.

In the months leading up to my back injury I was an exercise fiend. Not in any sort of well-calculated, strategic method, but in a haze of “burn it all, all the time, burn, burn, burn.” And it took its toll. Instead of nourishing my body to make it work better, I treated exercise as the remedy to bad eating. In the end, my body said, “Enough.” And I had to listen.

I am committed to healthful living and feel at my best when I weigh what I should, work out regularly, and eat right. These things are not always easy to accomplish, nor is having the right mental outlook about it all either. But in reflecting on why at age 36 I messed up my back so much that I had to cease normal activities to get through the day, I believe God was telling me something.

It is absolutely in His design for us to function at optimal physical capacity. These bodies of ours—the only ones we have in this life—are made to be strong, energetic, and vibrant. That they don’t always function in that way is our doing. Whether I was doing too much or too little, God’s words as I heard them were clear. “Respect the body I have given you. Treat it well. Rest it, replenish it, and, most of all, trust Me to deal with your ‘issues.’ ”

_________
Wilona Karimabadi is an assistant editor of the Adventist Review and editor of KidsView. This article was published March 22, 2012.