The Work in Greater New York 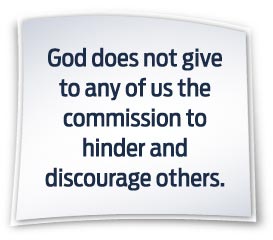 BY ELLEN G. WHITE
To the Brethren and Sisters in the churches of Greater New York, which are always to be united as one church in Christ Jesus:

You have not received that education which it is the will of God that you should have. You have not been depending upon the Bread of Life which came down from heaven. Had you studied the Word of God diligently, you would have been convinced that unity, and harmonious action are always to be preserved if one would advance in grace and the knowledge of the truth. Could your understanding have been with an eye single to the glory of God, your own selfish ideas would have been dispelled and your eyes would have been opened to the secrets of the great spiritual agencies in the church. . . . For years the plan of Heaven has not been met, and time has weakened the influence of the message. The commission to you who have come to a knowledge of the binding claims of the law of God, is that you are now to reach a higher standard than that which has hitherto been reached.

The differences which have existed, have left an unfavorable impression upon the minds of those who attend your meetings. . . . The time has come when all the differences must be put away fully, and thoroughly, and now, without delay, attempt a united, systematic effort for the one great object—sanctification through Jesus Christ to the obedience of the truth. “Sanctify them through thy truth: thy word is truth.” If this were accomplished, how long would it be till the influence of one would be the influence of all? Zeal, piety, and wisdom would blend in the converted souls through sanctification of the truth, in a combined movement, and the gospel of Christ would be exerting a decided influence in vigorous action, demonstrating the power of God unto salvation, and there would be deep earnestness in the work, more united and vigorous effort—a using of all your energies, a sustaining of one another in the work of enlarging the territory of the kingdom of God in our cities. Decided results would be seen, and prayers and hands would be uplifted to heaven, saying, “Who is sufficient for these things?”

Agents chosen of God must be selected, and their spheres of labor appointed them, and the workers must be sustained by the prayers and the contributions of the disciples who may remain in their business stations, and thus earn the means necessary to sustain those laboring to work out God’s appointed plan. The work of a united, converted church, with prayer and fasting for the Holy Spirit of God to be revealed, will bring the angelic agencies very near. As the disciples “ministered to the Lord, and fasted, the Holy Ghost said, Separate me Barnabas and Saul for the work whereunto I have called them.” God will work just as much in our day, if we will individually cooperate with Him.

Each should labor to strengthen the faith of the other earnest workers. God does not give to any of us the commission to hinder and discourage others. Any soul who can work interestedly under the supervision of the Great Head for the presentation of Bible truth and the saving of souls ready to perish, should receive our aid and encouragement. We must labor now for the extension of the truth, and as a result many souls will come to a knowledge of the truth in our hitherto unworked cities. The very choicest instrumentalities the church contains should be selected and sent forth, and sustained in extending missionary efforts.

The record of the appointment to special work of Barnabas and Paul continues, “And when they had fasted and prayed, and laid their hands on them, they sent them away.” They went to their appointed field of labor. The laborers moved under divine authority. These men must know for themselves the best fields in which to work. Some men can work better when they can be with their families; the church in their own home may need the influence of a God-fearing father to discipline and train his children. God would not have men ruthlessly sent to fields far away from their families. In sending Christian workers from post to post, let the fathers and mothers be consulted before the field is appointed. The home family flock is not to be left distressed for the want of the father’s judicious influence.

The Lord says, “Enlarge your borders.” The power of the gospel is expansive. Men are to be devoted soul-savers, and should have something to show for their labors. They should be producers as well as consumers. If a tree fails to produce fruit after a trial, something may be wrong with the tree. The cost of working the vineyard must be made as little as possible, because there is a large territory to be worked. As men are employed in different places, they should always be looked after and interviewed in regard to their work, to see what is the result of their labor. Does the worker give full proof of his faithfulness in ministry? If not, it will injure the cause, and also the one employed, to retain him. If the tree bears no fruit, it may be because it needs to be pruned or transplanted. If after proper labor it still has no fruit to bear, let it be removed; let the laborer be dismissed as an unprofitable servant in the work of soul-saving, and encouraged to go into some business by which he can earn means to act his part in sustaining the laborers who can work successfully—persons with tact and wisdom, who in the fear of God will win souls to Christ.

Churches are to be planted. No great centers are to be established, as at Battle Creek; and yet there will be some important churches raised up, and meeting-houses provided in large cities, favorable to accommodating the believers in [that locality].

There should not be a call to have settled pastors over our churches, but let the life-giving power of the truth impress the individual members to act, leading them to labor interestedly to carry on efficient missionary work in each locality. As the hand of God, the church is to be educated and trained to do effective service. Its members are to be the Lord’s devoted Christian workers. . . .

There are large interests in New York City; New York embraces a large field. It would be wise to have New York proper worked as a separate conference. It is a great missionary field. It will require a much larger outlay of means than is now anticipated. If New York is set off as a separate field, if it stands separate from the other territory and interests, we can make a specialty of this field, as a great missionary center, and more will be accomplished. Much confusion will also be avoided.

There is such a thing as workers’ getting in one another’s way, and losing time in making preparation to do something that ought to be done promptly. The best time to work New York City is now, the present, now; and let the path be made as straight as possible for the work to be done. At the same time let all the workers in New York be interested in every effort in adjoining localities.

Those working the great New York proper must have special plans by which to work that field, and the general working forces should unite in the matter of building up the missionary interests in Greater New York.

__________
This article, by Ellen G. White, is taken from The Atlantic Union Gleaner, January 8, 1902. Seventh-day Adventists believe she demonstrated the gift of prophecy in more than 70 years of public ministry. This article was published March 22, 2012.