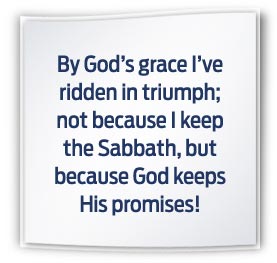 Hyveth Williams
“ ‘If you keep your feet from breaking the Sabbath and from doing as you please on my holy day, if you call the Sabbath a delight and the Lord’s holy day honorable, and if you honor it by not going your own way and not doing as you please or speaking idle words, then you will find your joy in the Lord, and I will cause you to ride in triumph on the heights of the land and to feast on the inheritance of your father Jacob.’ For the mouth of the Lord has spoken” (Isa. 58:13, 14).

These inspired words were the catalyst for my observance of God’s holy day. Since then, not only has the Sabbath become “a delight,” but God has kept His promise to make me “ride in triumph.”

When I joined the Adventist Church in December 1979, I was an emotionally broken college dropout, a misfit who often contemplated suicide as the only way out of the numbing, indescribable pain of my wounded soul. Two years later, by the miracle of God’s grace, I returned to college and earned my Bachelor of Arts degree in theology from Columbia Union College (now Washington Adventist University). Being one of two female graduates, I wasn’t hired as a pastor, so I continued my studies at the Seventh-day Adventist Theological Seminary in the Master of Divinity program. One year later the Potomac Conference assigned me to its Sligo church. While there I completed my degree and graduated from the seminary in 1989.

That same year I was invited to pastor Boston Temple, a broken-down church with 27 mostly elderly members in attendance. Again, by God’s grace we grew so fast that we had to hire an associate pastor. The tremendous reinvigoration of the congregation made it grow to almost 500 members. During his administration as General Conference president, the late Neal C. Wilson dubbed me “the resurrection lady.”

I served in Boston eight years. In 1992 we took some local street urchins, formed them into a choir, and took them to tour Washington, D.C. While there we were given an inside tour of the White House and given Christmas ornaments to commemorate the occasion.

In 1996 I was invited to become a fellow of the College of Preachers at the National Cathedral in Washington, D.C. That same year I accepted a call to the Campus Hill church in Loma Linda, California, as senior pastor. During my almost 14-year tenure I earned my Doctor of Ministry degree from Boston University, because at the time our seminary didn’t accept women in the program.

Since then I have traveled internationally to preach and teach; been a regular presenter on worldwide television programs; preached at a General Conference session; written and published several books; coauthored and contributed chapters to many others; and written magazine articles.

I have deliberately skipped over the hard places and heartbreaks during this incredible “ride” from a barefoot girl in Jamaica to my present position teaching preaching in our seminary.

Last year, while conducting a Week of Spiritual Emphasis at Jamaica’s Northern Caribbean University, I was invited by Governor-General Patrick Allen and Lady Patricia Allen as their overnight guest at their residence, King’s House. That’s where members of the British royal family stay when visiting the country.

To those who are unacquainted with my story1 or the class culture of Jamaica, this might seem like nothing; but it was extraordinary to me. Being from a poor family, I never thought or dreamed of visiting King’s House, much less staying there as a guest. I kept pinching myself and repeating the Isaiah promise.

By God’s grace I’ve ridden in triumph; not because I keep the Sabbath, but because God keeps His promises!2.

_____________
Hyveth Williams is a professor of homiletics at the Seventh-day Adventist Theological Seminary. This article was published March 15, 2012.