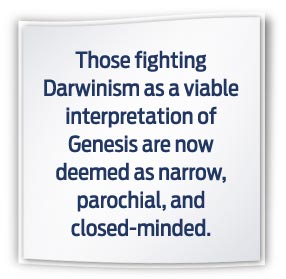 Cliff Goldstein
Amid the verbal combat zone of the Adventist blogosphere, I’ve lost track of how many times I’ve read such posts as: “Cliff, stop trying to ram your own view of Genesis down our throats” or “Goldstein, what makes you think that your narrow interpretation of Genesis is right?”

My view of Genesis? I’m flattered, except that the six-literal-days interpretation of Genesis was here to greet me back in 1980 when I joined the church. It’s no more mine (as if I, alone, hold it) than are haystacks and the pre-Advent judgment.

What these posts reveal, however, is an attempt to change the debate. Those fighting Darwinism as a viable interpretation of Genesis are now deemed as narrow, parochial, and closed-minded. That’s a slick move, but a false one. We’re not talking about making things such as the belief that God created spotted owls before whooping cranes or salmon before goldfish tests of faith. We’re talking about an ideology that, at its core, destroys all that we stand for as Seventh-day Adventists.

No question, Genesis 1 and 2 present challenges. Bible students have been trying to work their way through the Creation account for thousands of years. The issue isn’t that the texts aren’t without difficulties; everyone knows that they are. The issue is the “solution” Seventh-day Darwinians want to impose upon them.

For years I’ve been asking someone to give me a reinterpretation of the texts, based on the Darwinian worldview, that doesn’t undermine almost everything we believe: the trustworthiness of the Bible, the origin of sin and death, the character of God, and the meaning of the cross. The explanations, the few I’ve seen, would be laughable were the issue not so serious. (My favorite, still, is the theological argument that animals don’t feel pain. This deep insight gets God off the hook for the billions of years of suffering that evolution inflicted upon these unfortunate critters until the good Lord finally managed to eke a couple of homo sapiens out of the imbroglio.)

Meanwhile, I often hear the argument that Genesis was never meant to be a “scientific” explanation of origins. Who says? Maybe Genesis 1 and 2 are so scientific that science hasn’t caught up yet. If science still debates whether light is a wave or a particle, it’s a long way from explaining “And God said, ‘Let there be light,’ and there was light” (Gen. 1:3). Scientists can’t even agree on what it means for something to be “alive,” so who expects it to be of much help in explaining Genesis 2:7: “Then the Lord God formed a man from the dust of the ground and breathed into his nostrils the breath of life, and the man became a living being”?

A young man who interprets Genesis through the lens of Darwinism has boasted to me of his strict adherence to the literal seventh-day Sabbath. I still don’t get it, though. He interprets the first six days of Genesis in such a metaphorical manner that he squeezes into them billions of years. His metaphorical interpretation allows for chance and violence in the process of creation, though Genesis teaches explicitly that God precisely and purposely created everything. He interprets the first six days so symbolically that he argues for a common ancestry of species when Genesis teaches the separate creation of separate species. With the first six days allegorized into the level of myth, like Circe turning Odysseus’ men into pigs, why is only the seventh day taken literally? For some,  sophisticated epistemology hasn’t impacted (at least not yet) the habits acquired from reading Uncle Arthur’s Bedtime Stories.

Any belief—sacred, secular, whatever—comes with challenges, and that certainly includes our belief in a literal six-day creation as depicted in Genesis 1 and 2. But that’s not the point. The point is the attempt to incorporate a radically alien theology into Adventism. And one of the latest tactics in that attempt is to change the debate in order to make those who reject this theology look narrow-minded, dogmatic, and parochial. Fortunately, the church isn’t close to falling for it.

My narrow view of Genesis? Yeah, right. Mine and millions of other Seventh-day Adventists as well.

___________
Clifford Goldstein is editor of the Adult Sabbath School Bible Study Guide. His latest book, Shadow Men, was recently published by Signs Publishing in Australia. This article was published March 15, 2012.