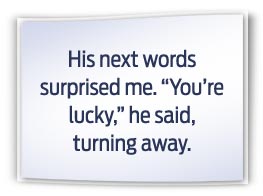 Andrew McChesney
The other day, as I stood in a Moscow park waiting to meet a fellow journalist for lunch, I saw him. The hunched-over figure, wrapped in a long, scruffy overcoat, was walking slowly across the center of the park—headed straight toward me.

I knew exactly what would happen next.

When the homeless stranger reached me, he would stop and ask for money. My duty would be to gauge whether he really needed help, so I would ask why he wanted the money. If he replied, “To buy vodka,” I would refuse and gently reprove him for drinking. If he wanted a loaf of bread, I would offer to go to a nearby shop with him to buy the bread, thereby avoiding a scenario in which I would have to entrust him with cash.

I looked around the grassy park, dotted with paved paths and a few small trees. No shops were in sight.

With an inward grimace I weighed the inconvenience of having to leave the park with the homeless man in tow, searching for a shop with bread. By leaving the park, I might miss the arrival of my friend for lunch. Of course, she could call my cell phone. But still, it is important to be on time for appointments.

I considered moving to another part of the park, far from the path of the still-approaching man, to avoid the pending conversation altogether.

I immediately chided myself for even thinking about fleeing from a homeless man whose intentions—if he had any—remained unexpressed.

Finally the man drew near. Sure enough, he stopped beside me. A thick bushy beard framed his face. His eyes were on the ground. I waited for the inevitable plea, “Could you give me a few rubles?”

Instead I heard, “Could you point me in the direction of Kutuzovsky Prospekt?” The man mumbled and kept his gaze downcast. He clutched an unlit, white cigarette between two grimy fingers.

“Over there,” I said, pointing toward the bustling thoroughfare beyond the park.

I guessed a 15-minute walk.

The man paused for a long moment. I waited expectantly. Then he spoke again. “Do you have a light?”

His next words surprised me. “You’re lucky,” he said, turning away.

As he shuffled off, I thought with amazement how lucky I really am. With heavenly help I was freed from an addiction to cigarettes when I gave my heart to God several years ago. Moreover, I can rejoice that God has freed me from the addiction of a multitude of sins. What sweet peace to be free from the slavery of sin and the accompanying burden of guilt!

Peter aptly described the relief found in freedom from sin this way: “Repent, then, and turn to God, so that your sins may be wiped out, that times of refreshing may come from the Lord” (Acts 3:19).

Let’s celebrate the refreshing that comes from the presence of the Lord. My homeless friend got it right when he said we are lucky.