A Pearl for an Idiot 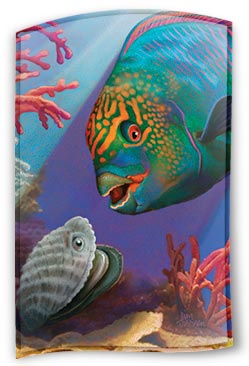 BY JEFF SCOGGINS
To say he wasn’t much to look at would be kind. Compared to the brilliant coral at yonder reef or the shimmering clouds of silver fish that flashed by now and then, the oyster was positively ugly.

His shell was thick, rough, and dirty—an encrusted suit of armor that afforded little freedom to move. The oyster sat in his sandy bed watching ocean plants around him dance to the rhythm of the currents. He watched colorful parrotfish float lazily through the crystal water, and sleek dolphins frolic in patches of sunlight that streamed to the white sandy floor.
But the oyster couldn’t play like them. He just sat there being ugly.

What Would It Be Like?
Sometimes the oyster felt powerful vibrations, accompanied by a dark shadow that churned the water like an enraged hammerhead. He’d heard about the surface, and he wondered about life up there. How could you breathe out of the water? What would it be like to move that fast and that far?

Once, in an attempt to explore some of his tiny world, the oyster opened his shell to catch a current. But after that rough-and-tumble experience he’d learned his lesson. He would never go far.

For a while the oyster was jealous, and perhaps a little angry, about the freedom and beauty everyone else enjoyed. What had he ever done to deserve a life of sitting like, well, like an ugly, stupid oyster day in and day out? He would never explore his home, never see the not-so-distant surface, never attract the admiration of a snorkeler.

Sharks told him fantastic tales of their dangerous exploits, flying fish boggled his brain with stories of outer space and gigantic alien ships. And sea anemones nauseated him with their perpetual beauty pageants.

But what bothered the oyster most was everyone’s pompous attitude about their freedom and beauty. Not that they ever laughed in his face about their good fortune and his misfortune, but he could feel their pity, even their scorn. Their stories became mockeries, well-placed jabs into his soft soul. He’d never noticed everyone’s selfish pride before. But now that he had, he could see it everywhere. And he could see it growing—especially among the parrotfish.

Parrotfish were colored as brilliantly as fabled rainbows. And every day these arrogant fish swam circles around the oyster simply to excite his jealousy. Sure, they pretended to be his friends, but the oyster knew better. They were polishing their skin-deep pride on his ugly shell.

Never the Same
Then something happened that changed the oyster’s life. Of the many sunbeams that dropped through the water, very few landed on the oyster. But today a beam spotlighted his sandy bed. He opened his shell wide to drink in the delicious warmth and absorb a little extra vitamin D.

The parrotfish usually swam farther away from the oyster. After all, who wanted to be seen with someone as ghastly as he? But today one of them decided to visit the oyster’s sunbeam. And would you believe it? He coasted to a stop directly over the oyster.

Furious, the oyster screamed at the parrotfish, “You’re blocking my sunlight!”

The startled parrotfish shot straight up, stirring the sand around the oyster. “I’m terribly sorry,” he sputtered apologetically. “I didn’t see you there.”

“Yeah, right,” snapped the oyster, doing the same with his shell to keep the sand out. “I’ve been here forever. You just don’t think I’m worth getting any sunlight. You . . .”

The oyster continued to mutter to himself after his shell closed. The parrotfish puzzled over the oyster for a moment, a confused and slightly pained look on his face. Then he slowly swam away.

“Uh-oh,” the oyster’s tirade ended suddenly. He had vented a second too long, and now a grain of sand settled into his shell. Oh, it was uncomfortable! No, uncomfortable wasn’t the word; try simple unadulterated pain.

“Now what do I do?” he screamed at his parrotfish assassin. There was no evicting the offending grain. From this day forward all that awaited the oyster was a life of shell-grinding torture.

“You did this to me!” The oyster’s roar echoed and reechoed his despair and rage through the now-silent water. Finally, in painful desperation, he began to rub the rough corners of the grain of sand. Maybe he could smooth it just a little.

Over time, as happens when an oyster polishes a rough grain of sand, it eventually became a pearl. Polishing away one day, the oyster paused to examine his dreadful curse. Suddenly, as he gazed at the beautiful jewel that was his, something inside him changed. He realized he’d received a gift; something about which he could be proud. Those pretentious parrotfish had nothing on him anymore. This ugly oyster had something more exquisite (and deeper, by the way) than their rainbow-spectrum scales could ever be.

From that day forward the oyster didn’t fume at those who tried to be his friends. He just covered his pearl and bestowed on his new subjects an aloof smile. He was inferior no longer.

What the oyster, who now possessed the most beautiful pearl in the ocean, would do was—was nothing at all.

________
Jeff Scoggins writes from Brainerd, Minnesota, where he is a parish pastor. He and his wife, Becky, are raising two sons. This article was published February 23, 2012.