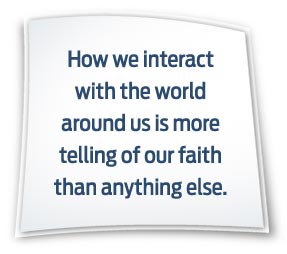 By Andrew W. Kerbs
As an Adventist youth attending a public university, I am aware of the tremendous ?need around me. Many are drawn to the mission fields of Kenya and Thailand, and rightfully so. I am drawn to the overwhelming number of my generation who surround me every day, and who have never heard the three angels’ messages.

I remember being approached by a young man a few months ago.

He stood out from the crowd, a tangible confidence in his step. I pretended not to notice when he began to walk with intent in my direction. His buzzed head said military or Eastern monk, and a quick glance at his attire confirmed the latter. He had the makings of an activist for Greenpeace or some other such organization. Whatever he was, I cringed as he walked over to me.

“You look like a smart guy,” he said sitting next to me on the bench.

I half smiled and shrugged, distrusting his agenda.

“All right, look,” he said, removing a book from his messenger bag. “I know this sounds crazy, but I just want you to see this book. You don’t have to pay me; just look at it.”

He handed me a copy of the Bhagavad Gita, sacred Hindu scriptures. I was expecting global-warming pamphlets, so the book made me blink and take a second glance.

“This wisdom,” he told me, “has totally changed me. I never knew about it until I came to university, and now that I know, I just want other people to have that chance.”

I ended up not keeping the book, for obvious reasons. The young man went on his way and disappeared as quickly as he came. Though I felt little inclination to become a Hindu from this experience, something about him left a lasting impression on my mind. We shared little, if anything, in theology and religious worldviews. Our conversation had taken only moments out of a long day, but these few minutes had a profound effect on me.

He exuded confidence. Passion drove him. A genuine desire to help fueled his curbside crusade to share his faith.

Because I was a proclaiming Christian and, even more, a seemingly devout Seventh-day Adventist, this became a slap in the face. Where was my confidence? Probably hiding behind my fear of ridicule. Where was my passion? Lost in the memories of the last evangelistic series I attended. Where was my desire to help? Well, it was there. But my rigid comfort zone made certain it would not be seen too often.

Opportunities Exist
Being the loner among my friends who attended a non-Adventist university has made me a minority both on campus and in my church. Though it is certainly not something I would promote for all Adventist youth, my academic sojourn has shown me a wonderful opportunity and an even greater need. Save perhaps the University of Michigan and a few others, there is virtually little emphasis or effort in the Adventist Church for reaching our nation’s public universities. In my area alone there are four major universities, all within a 20-minute drive. On these campuses Adventist outreach is not only weak—it’s entirely nonexistent.

And it is not that people are unreceptive!

About once a semester a group of a dozen or so suit-and-tie-clad older men show up on the campus street corners passing out copies of the New Testament and the Psalms. Though most students take a copy with a smile, most of these end up in the trash and discarded all over campus throughout the following week.

Riding the shuttle bus back to the parking area one night, I heard a student say, “It’s nice that they hand out Bibles, but it’s not like I can’t get one anywhere else. The problem is that there’s no connection beyond that, so no one really cares.”

Upon hearing this, I recall the young man I had encountered several months before. If I hadn’t been grounded scripturally in what I believe, his passion and enthusiasm alone would have sold me on his religion. This got me to thinking. A church’s greatest message is not what is preached on Sabbath morning. The greatest message is what its members live throughout the week. How we interact with the world around us is more telling of our faith than anything else.

In the Gospel of Matthew, Jesus shares the parable of the sower. We all know the story of how seed fell by the wayside, on stony places, and among thorns. These did not last. But then Jesus shares how the seed that fell on the good soil yielded a crop, some a hundredfold, some sixty, and some thirty. In a world steeped in humanism, Darwinism, and outright atheism, one might think that secular college campuses would offer only rocky soil and thorny thickets. On the contrary, the good soil exists here, with only one problem. It lies fallow. Who will plant the seeds?

Young people are still developing their worldviews at this stage. They are still searching, still asking, and still trying to make sense of the world and their own existence. Don’t believe me? Ask 20 random students who God is to them, and you will not receive the same answer twice. More than that, most of these are open to persuasion and varying opinions. Their hearts are not entirely hardened to the Holy Spirit’s call. But who will plant the seeds?

Seed Planters Wanted
If we don’t, who will? The question is rhetorical, and the answer is no one. But what can we actually do about it? Good question! Here’s my take on it:

Virtually every university in America has some sort of campus ministries department. Use Google to find the Web page of your local university. From there, use the search bar and enter “campus ministries.” This will almost always direct you to the Web page where the university lists contact information for the various religious ministries they have on campus. Often, to add a new ministry such as Seventh-day Adventist, an application process must be followed. Once granted, however, the new ministry gains access to on-campus space as well as recognition by the university. Of course, this is only the beginning!

Talk to your pastor or youth leader. Take the initiative. It takes only one or two individuals with a good idea to set the plan in motion. You don’t need an army to start a movement.

Occasionally a certain number of enrolled students need to already be on board for a proposed ministry to pass the application process. If this is the case, we as Seventh-day Adventists can still certainly minister to our universities. For example, youth groups passing out literature on the sidewalks between classes are an excellent way to reach people. Now, I don’t mean generic, run-of-the-mill Bible pamphlets. Make cards with your home church’s information on it. Talk to people. Ask a person their name. Pray with them if they’re willing. If not, no pressure, but leave them at least with a card and a personal invitation to attend church that Sabbath.

Start Small
The key here is to start small. Don’t feel as if you must invite half the campus on the first try. If each young person simply invited two students and made a point to remember their names, this could be enough. Obviously, not everyone invited will show up. But if the few who did were recognized, known by name, and welcomed as if they had been expected, you can be sure you will see them again.

Ellen White has said that we are called to be witnesses—witnesses bearing the news of a risen Savior to a dying world. If you’re like me, you can see the issues that our church faces. But maybe you can’t see anyone doing something about it. Maybe the reason that we don’t see people doing something about it is that they simply don’t know what they can actually do!
The ideas I’ve listed are only the beginning. I hope after reading this, other young people and youth leaders will have an idea where to begin. All movements begin small, but with a few inspired and passionate people guided by the Holy Spirit, the sky is the limit!

We don’t have time to wait for change to happen by itself. It won’t. As Adventism’s younger generation, it is time we take our message to the young people of our universities who have never had the opportunity to hear it.

It is time we become the change.