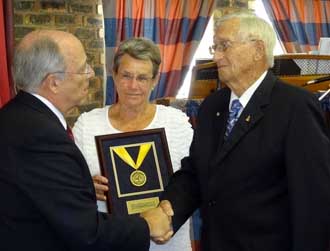 The next time you get the thought that one person really can’t make a difference in their community, consider Denis Baird, a retired Seventh-day Adventist pastor from South Africa.

Baird, now 92, was a full-time Seventh-day Adventist minister who in 1975 launched what is now South Africa’s National Council Against Smoking, an organization that helped the country in the 1980s to ban smoking on South African Airways domestic flights.

In December 2011 the Adventist world church awarded Baird the General Conference Health Ministries Medal of Distinction for his lifetime of service and promotion of healthful living.

“It’s richly merited. Denis was a pathfinder. Before him, no one was working on tobacco control in South Africa,” said Dr. Yussuf Saloojee, executive director of South Africa’s National Council Against Smoking.

When companies refused to offer information on ingredients, he contacted what is now the U.S. Centers for Disease Control and Prevention in Atlanta. Officials there agreed to study the cigarettes and requested 200 samples of each cigarette brand. For the study’s integrity, they needed them delivered personally.

His luggage mostly filled with cartons of cigarettes, Baird flew to Atlanta. High above the Atlantic Ocean, he said he remembers having no doubts on the outcome of the study.

“I felt very strongly that it was going to work. We had strong indications that cigarettes in South Africa were very dangerous,” he recalled. The rate of lung cancer among smokers in South Africa was much higher than in other countries, he added.

Months later the results concurred. Cigarettes in South Africa were found to contain more than double the rates of nicotine and tar than most cigarettes produced in other countries.

The results created an uproar when Dr. Harry Seftel, a professor of medicine at the University of Witwatersrand, Johannesburg, and a cofounder of the council with Baird, published them in 1978.

Baird’s council work was in addition to his job as a full-time local church minister. His ministry career also included posts as a conference president in Rhodesia—now Zimbabwe—and the Cape Conference in South Africa.

Today some 5.4 million people die annually because of  tobacco-related illnesses, and this figure is projected to increase to more than 8 million a year by the year 2030, church health officials say.

Some countries have shown a steady decrease in smoking, such as the United States and Australia. But smoking is increasing in other parts of the world, including many developing countries, health experts say.

“Unless interventions are put in place on a wide and broad scale, these statistics are unlikely to improve,” said Dr. Peter Landless, associate Health Ministries Department director for the Adventist Church.

“The battle will never be won unless current smokers are targeted and assisted to stop smoking,” Landless said. “It is crucial and important to focus on preventing the initiation of tobacco use. But it is equally important to assist people to stop smoking as well as to lobby for tobacco restrictions and control.”

In 2000 the American Cancer Society gave the South African government’s Ministry of Health a Luther Terrey Award for its support of tobacco legislation. The society said smoking rates in 1998 had dropped 30 percent since 1991 because of government efforts, which serve as a model for other low-income countries in dealing with tobacco industries.

“[Baird] is a role model,” said Saloojee. “The foundations were laid by the work that he did.”

Magazine Article
Vaxed, Vexed, or Other?
Need the latest guidance on vaccination? This is it.