More Than a Huddle 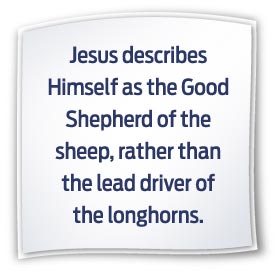 Bill Knott
An old “funny” from my childhood has been bobbing in my head of late.

The muscled rowing master on the Roman galley says to the chained prisoners, “I have good news and bad news. The good news is that you will all have double rations today. The bad news is that the captain wants to go waterskiing after lunch.”

Like all such “good news/bad news” stories, this one finds its rueful comedy in the pairing of emotions utterly inconsistent with each other. At the end of it all, we might have chosen to gladly forgo the good news if by doing so we could avoid the bad. It’s no joy when the thing that we are hungry for is heard only in the context of a task that sounds daunting.

So it is I wince—and sometimes cringe—when in the church of Jesus Christ we pair things that weren’t meant to be heard together. We yoke imperatives for our purposes that were never linked in His. When Jesus urged those whom He had chosen, “Come to Me, all you who labor and are heavy laden” (Matt. 11:28, NKJV),* He did so because He intended that they discover and experience His soul-restoring rest—not primarily so that they could be recharged to do more heavy labor. When He reminded His disciples, “Where two or three are gathered together in My name, I am there in the midst of them” (Matt. 18:20, NKJV), His chief intent wasn’t the formation of three-person evangelistic units.

Jesus knew and clearly taught a lesson that His church has frequently been slow to grasp: there’s an essential and inescapable need for all who follow Him to revel in His rest, bow before Him in worship, and find the solace of faithful companions—even if no tracts are distributed that afternoon or any sidewalks shoveled. One of the persistent illusions of our movement is that believers who have rarely known His rest, discover little joy in worship, and leave the sanctuary as lonely as when they entered can nonetheless effectively communicate the story of Jesus. Having read ourselves full of management theories for the last half century, we find it hard to look at any group of three or more believers and not imagine them harnessed for some task we think is urgent.

It’s significant that Jesus describes Himself as the Good Shepherd of the sheep, rather than the lead driver of the longhorns—and not just because Judea is not Texas. The same Lord who famously commissioned His disciples to “go therefore” (Matt. 28:19) had previously invited them, “Come to Me.” Jesus’ teaching—in sermons, in parables, in daily conversations—was filled chiefly with lessons about the relationships, attitudes, and behaviors of kingdom living, and only latterly about mission and evangelistic duty. A church that bears His name and carries His message ought reasonably to adopt the same priorities. As with sheep, so with disciples: from rested, healed, and companionable creatures flow love and good news to a world much in need of both.

Adventist congregations aren’t simply evangelistic huddles, as vital as evangelism is to the overall faithfulness of a remnant people. Our worship, our fellowship, our holding of each other in the dark moments that come to every life are just as fully expressions of our loyalty to the Good Shepherd as are the Bible studies we give or the sermons we preach. They don’t replace the deliberate telling of the story of Jesus, but neither are they only precursors to it. Heaven measures faithfulness in more than converts won or souls reclaimed.

Praise matters; fellowship matters; reconciliation matters—and when the body gathered in His name affirms these truths, it will find a power in its witness greater than it has ever known. n