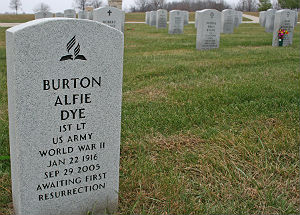 This is a highly personal story, but also a newsworthy one. After years of effort the U.S. Department of Veterans Affairs has approved the engraving of the Seventh-day Adventist Church logo on headstones at military cemeteries. Here’s a first-person perspective on how the change came about.—Editors.

In late 2005 church member Rosalee Dye contacted the Iowa-Missouri Conference office with a request: please send a copy of the official Seventh-day Adventist Church logo to the Veterans Cemetery in Jacksonville, Missouri, so that it could be etched on the headstone of Burton, her late husband.

Since the headstone was about to be made, I rushed a fax off to the Missouri Veterans Cemetery with the black-and-white logo they needed. A few days later I got word from the cemetery director that the Adventist logo could not be put on Dye’s headstone because the logo was not on the Veterans Administration’s (VA) official Emblems of Belief list. In order to get our logo on the list, I needed to supply the VA, via the Missouri Veterans Cemetery, with very specific documentation regarding the validity of our organization.

In gathering the requested information, I learned that an organization cannot on its own start the process to add their emblem to the list; a written request from the next of kin of a deceased veteran has to come first. As Mrs. Dye had already started the process, we as a church had to submit a letter, signed by a primary contact person, which certified the emblem was widely used and recognized as our official logo.

I contacted the late Reger Smith, Jr., then director of public relations at the General Conference, and enlisted his help in compiling the necessary documentation, including the letter of certification. Once the pile of papers with very detailed information about the establishment of our church, our beliefs, organizational structure, and worldwide membership statistics was mailed, I patiently waited for a response.

What ensued were two years of phone calls and e-mails to the person in charge of the Emblem of Belief management at the VA. I was assured on every occasion that our paperwork had been received and would be reviewed for approval. In 2007 I found out that the VA had begun the process of changing the way Emblem of Belief requests were evaluated, and as a result our request had been set aside.

All throughout this process I had been speaking with my dad, Mike, a Vietnam veteran and clinical social worker/team leader for the Citrus Heights, California, VA Center, about the lack of progress. He assured me that just because the wheels of the VA turn slowly, it didn’t mean they weren’t turning.

In 2009, after two more years of waiting and continued contact with the VA, I was ready for a new strategy. My dad suggested that to get the wheels turning faster I should enlist the aid of a senator. I wrote to Iowa senator (and U.S. Navy veteran) Tom Harkin, asking him to help with the church’s emblem request.

Senator Harkin’s staff was very helpful and asked for detailed information about our submission. A letter, written and signed by the senator, asked the VA about the status and reason for delay of our emblem request. The VA wrote back to Harkin and explained that until the changes to the Emblem of Belief evaluation process were approved, the church would have to wait for a decision.

In March 2010 Rosalee Dye received a letter from the VA stating that the rules had changed and that now any emblem, whether on the official list or not, could be requested to be etched on a headstone. Only the decedent’s next of kin could make the request; once it was approved, the VA needed only a black-and-white digital image of the logo.

Rosalee wrote me and asked if I would e-mail the VA our logo. I had tears in my eyes as I read the letter, praising the Lord for His goodness and the patience He had granted me throughout the trying process. Less than a year later the Seventh-day Adventist logo was etched on Army Lt. Burton Dye’s headstone. Dye served in the United States Army for 16 years, four of those years overseas during World War II, and to the best of my knowledge his is the first headstone to receive the logo.

Being content with the VA’s approval of Mrs. Dye’s request and uncertain that the logo would ever be added to the official Emblem of Belief list, I stopped checking the VA Web site for updates. In March 2011 I visited the site and again cried as I saw that the Adventist logo was finally on the official list, meaning that the Adventist logo is available to be etched on any headstone of a veteran buried in a national, state, veterans’, or military post/base cemetery. The decedent’s next of kin, a person authorized in writing by the next of kin, or a personal representative authorized in writing by the decedent can request that the logo be added to any past or present headstone.

To find out more about the process to add the logo, visit: www.cem.va.gov.