It's Not a Fad 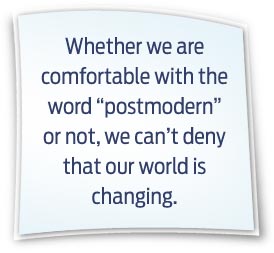 BY MIROSLAV PUJICFad (fad), noun: a temporary fashion, notion, manner of conduct, especially one followed enthusiastically by a group

This is how many people define postmodernism. But what if postmodernism is more than a passing fancy? Is it possible that, in all the hype about emergent culture, we might be missing something bigger?

What It Really Means
Many Christians—Adventists included—have a knee-jerk, negative reaction to the word “postmodern.” They’re convinced that anything from today’s culture will pollute the church’s purity, and that we must stand against it to preserve our identity and mission.

But hiding in castles, safe from life in the valleys below, won’t keep society from changing. And clinging to a “fortress mentality” certainly won’t help us fulfill the Great Commission (Matt. 28:19, 20).

In their book Christian Worship: Its Theology and Practice, Franklin Segler and Randall Bradley observe: “In recent years those who closely follow the developments of the church have frequently heard the term postmodernism. . . . While some would like to believe that postmodernism is a fad that will quickly fade, most scholars are convinced that postmodernism is anything but a fad; postmodernism is a cultural shift, the likes of which have not been experienced since around 1500, the beginning of the modern period.”1

As long as we label postmodernism a fad, we give ourselves permission to ignore people in our culture who desperately need Jesus. We facilitate passive indifference in that neighbor or coworker who isn’t an “A” interest. We effectively let ourselves off the hook.

Meeting the Challenge
Japan has been called “the first genuinely postmodern society,”2 with South Korea, Singapore, and Hong Kong not far behind. In the United Kingdom only 13 percent of the population regularly attends church.3 In Australia some 92.5 percent of the population is un-churched.”4 A full 82 percent of Canadians don’t attend church regularly.5 And 100 million people in the United States are unchurched;6 that’s one in three!

This cultural shift is not just an American or European phenomenon. It is readily recognizable in most parts of the developed world.

So what are we going to do? Keep blaming our attrition on the fact that nobody seems interested in church anymore? Or do we do something about it?

Whether we are comfortable with the word “postmodern” or not, we can’t deny that our world is changing. This new culture isn’t going away. Hiding from it won’t keep us safe. So why not follow Jesus’ example and get involved with people instead?

When Christ healed the demoniac, his first request was to join the elite, the disciples. But Jesus told him, “Go home to your own people and tell them how much the Lord has done for you, and how he has had mercy on you” (Mark 5:19). It was the harder path: to go back into familiar surroundings where people knew his humiliated past, to become a vibrant witness of Christ’s transformation. In joining the disciples, the man would have run away from evangelizing his own people in favor of serving in a more exciting mission field.

It doesn’t matter if your church is small or large, rural or urban—because every Adventist has to choose. Will we hide from emergent culture, hoping the world will eventually come back to its senses? Or will we accept the biblical command to live daily evangelism? Think twice, because an authentic return to biblical principles might force us to dig up the reasons we call ourselves Adventist and recommit to those doctrines personally. It’s much easier to live behind the castle walls!

Postmodernism isn’t a fad. We can’t pretend it doesn’t exist. Unless, of course, it doesn’t matter to us whether we imitate Jesus and follow His command to share the gospel. Postmodernism is the new reality. Hiding our heads in the sand won’t make it go away. We’re faced with only three options: maintain the status quo, ignore reality, or contextualize the gospel for success.

What will we choose?

___________
Miroslav Pujic is director of Ministries to Secular and Postmoderns for the Trans-European Division. This article was published January 26, 2012.