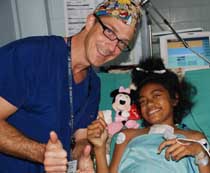 our “harrowing” hours after undergoing complicated heart-valve surgery, 12-year-old Ophelia is smiling again.
The enthusiasm in Dr. Neil Orford’s blog post after Ophelia’s recovery is palpable. The intensive-care physician from a hospital outside of Melbourne, Australia, is among a team of medical volunteers coordinated by Sydney Adventist Hospital that recently provided surgeries for dozens of underserved patients in Fiji.

“Even with my 20 years of intensive-care experience, I can’t help feeling amazed at what happens on the Operation Open Heart trips,” said Orford.

Since being launched more than 25 years ago, Operation Open Heart volunteer teams have performed surgeries for more than 2,100 patients in 12 developing countries in the South Pacific, Southeast Asia, and Africa.

“It is quite special to be part of a team that can fly in, provide such complex surgery and care, and have such a wonderful reward as kids like Ophelia getting new heart valves and new life that she otherwise would not have received,” said Orford.

Operation Open Heart patients would not survive long-term without cardiac care. Their families either cannot afford surgery or live in remote areas where specialized medical care is absent. Many are children born with heart defects, such as Ophelia.

The project began in 1986 after an intensive-care nurse from Sydney Adventist Hospital visited Tonga and noticed a basic lack of cardiac treatment. He wondered if patients could be flown to Australia for lifesaving surgery. Flying in a volunteer medical team turned out to be more affordable.

Since then, more than 1,500 medical professionals have volunteered their time and skills toward the project. They’ve also donated a combined ?A $7.5 million over the years to assist with travel, accommodation, and equipment expenses. A recent trip to Papua New Guinea required 15 pallets of supplies ranging from syringes to specialized surgical equipment. A single trip can cost as much as A$200,000. In addition to private donations, the project benefits from dozens of corporate supporters.

In recent years the project has expanded to include other often unavailable surgeries, ranging from cleft palate repair and burn reconstruction to, most recently, eye surgery. By training local medical staff in diagnosis and treatment, the volunteer team helps hospitals and clinics in host countries move toward self-sufficiency.

“[Sydney Adventist Hospital’s] mission statement is ‘Christianity in Action,’ and I personally believe this is one of the greatest ways that we can actually show that, in this response and the donation of our time to do things for people who simply can’t access this type of surgery,” Michael Were, HealthCare Outreach manager for Sydney Adventist Hospital, recently told InFocus.

The next Operation Open Heart trip is scheduled for Myanmar in early 2012.