The God of Impossible Causes 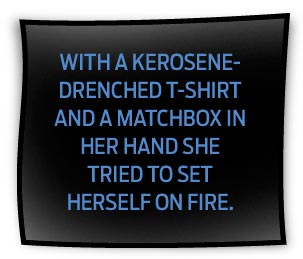 BY SUDHA KHRISTMUKTIThe knock on my door was persistent. When I opened it, a tired, thin, gaunt-faced young woman with disheveled hair and a defiant scowl stared at me. She seemed to be in her early 20s. Beside her stood Mary, an old acquaintance I hadn’t seen in 16 years.

After they settled on the sofa, Mary said she had searched me out. The young woman who sat passively and stared at her toes was her sister, Tina. Mary told me that Tina had tried to take her own life a few days earlier. She had survived, but now she spoke to no one and refused to eat.

Mary left after an hour without further explanation. I assumed she would come back later to take Tina home. I had no idea that she would never return.

The Beginning of a Long Journey
There was no extra room in my house, so I settled Tina on a folding bed in my room. She lay on the bed day after day, not speaking, barely moving; staring at the ceiling with dead, vacant eyes. It took repeated coaxing for her to take at least some fruit juice, which she sipped reluctantly. The icy walls she built around herself were impenetrable. She urgently and desperately needed nourishment, but eating was far from her mind. Her stony silence and angry brow betrayed hatred and loathing that she kept to herself. Rejection, hopelessness, and heavy despair enveloped her completely.

I was too stunned and perplexed to think. My town has no crisis centers, suicide intervention programs, women’s shelters, AA groups, or psychiatrists. My days were filled with travel, work, and chores. What would I do with this total stranger, whose own family obviously no longer wanted her? How would I reach someone too deeply wounded to care whether anyone cared at all? All I could do was pray.

Slight Progress
Three months passed. Then Tina dared to bare the pieces of her shattered self. “I wish I had never been born,” she declared chokingly. She felt unwanted by her father, who was frustrated and disappointed that he hadn’t had a son. A hate-filled abusive man, he constantly cursed and physically abused her. To escape his perpetual wrath, she often ran away from home, got involved with drugs, and became an alcoholic. She couldn’t quit, and she didn’t care.

As Tina grew stronger her bitter rage returned. From time to time she’d run off. Each time I’d pray that the Lord would guide her steps. Each time I’d welcome her back.

One evening she left a note on my desk saying she couldn’t live anymore and had no strength to try. Once more I knelt in desperate prayer. She returned after 48 agonizing hours, her clothes caked with mud. She told me she’d walked endlessly into the dark night and come to a huge reservoir where she’d planned to drown herself, but somehow couldn’t. Thanking God, I trembled with relief.

I encouraged her again and again ?to see a psychologist in another city. After several weeks she agreed. I drove her on my scooter 43 miles (70 kilometers) there and back again three times a week. Initially she refused to answer a single question. After many sessions she slowly began talking. But when things seemed to be progressing, she suddenly refused to go back.

One afternoon she stood in the middle of my kitchen with a kerosene-drenched T-shirt and a matchbox in her hand and tried to set herself on fire. Somehow I wrenched the matchbox away and pushed her into the backyard.

“Why don’t you let me die, you fool? It’s my life!” She burst into great sobs, collapsing to the ground. She spent several days in a hospital.

Again, with great dread I prepared to take her home. I had been badly shaken and shocked at these events. It seemed as if nothing could touch this frozen, hard, unreachable heart. My mother and I continued praying for her, over her, with her.

A Breakthrough
Then one night I was reading aloud Psalm 91, my favorite: “Whoever dwells in the shelter of the Most High will rest in the shadow of the Almighty. I will say of the Lord, ‘He is my refuge and my fortress, my God, in whom I trust’ ” (verses 1, 2).

To my utter surprise, Tina asked me to read it again. I also read Philippians 4:13: “I can do all this through him who gives me strength.”

Tina didn’t say a word, but I knew she was thinking, thinking seriously. She’d told me she was an atheist, who’d never known, needed, or heeded God. But over time she began expressing an interest in this God my mother and I so much believed in.

One day she declared, “There is no God. And even if there is, He doesn’t care; not about me, anyway.”

“Why did you care?” she asked.

“Because Jesus does, don’t you see?”

She was silent for a long time. Then the torrent of tears came; she couldn’t hold them back. It was nearly dawn when I held her hand and asked the Lord to take control of her spirit, her mind, and her body. For once she bowed her head with me in prayer, in total surrender to a God she never thought existed.

Slowly, very slowly, she began to eat and sleep well. She fought long and hard with her addictions. After more than a year of intense struggle she triumphed over the alcohol and drugs.

Over the next two years Tina came and went. She spoke about the difference Jesus was making in her life, and how tough it was trying to cope with her new lifestyle. The promise of Psalm 121:3 inspired her: “He will not let your foot slip—he who watches over you will not slumber.” She said she held on to it for dear life!

Psalm 91, however, had the deepest effect over her spirit. She read it every night, and each time she felt weak, vulnerable, and tempted to fall.

Helping Tina made me rely heavily on God’s love, wisdom, and guidance in coping with what was an impossible task. It was only by God’s absolute grace that I was able to keep supporting and encouraging this angry, broken person. Days turned into weeks, weeks into months, until more than a year had gone by. It was hard for me to give my time, help, understanding, and listening ears to just one person! But God is available for all, everyone across the world, anytime, anywhere, always.

I realize now, more than ever, that our God never sleeps.