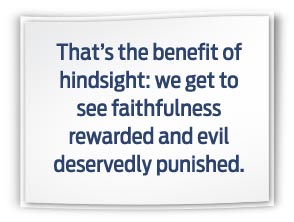 Jimmy PhillipsHave you decided on your New Year’s resolution yet? If not, I’ve been scouring the Internet for ideas, so let me see if I can lend a hand. Here are a few suggestions from a list of America’s most popular New Year’s resolutions (which 60 percent of people give up on by mid-February, but I digress):

You could spend more time with family and friends, work toward that toned physique, get out of debt, learn a new skill, or pursue the ever-ambiguous goal of “getting organized.”

If you’re looking for something a little less cliché, try to set a Guinness world record, or learn how to speak a new language—maybe Mandarin Chinese (it is the world’s most used language).

If all else fails, you’re certainly welcome to join me. This year my resolution is all about waiting.

Good Examples
Throughout the Bible, particularly in the Old Testament, a lot of amazing stories can help guide us as we make important life decisions. In these incredible sagas we see the lives of men and women unfold before us. It’s easy to separate Bible characters into two distinct categories: those who followed God were given ultimate direction and clarity; those who didn’t often lived out their days in turmoil and uncertainty.

That’s the benefit of hindsight: we get to see faithfulness rewarded and evil deservedly punished.

Sometimes we forget that these people—even the seemingly unshakable patriarchs—were mere mortals. They doubted, made mistakes, and faltered under pressure. Sound familiar?

If anyone typifies true faith, it’s Abraham. After all, he left his home with absolutely no idea where he was going. He was the chosen father of Israel, with whom God made His covenant. He even gets 12 verses in the hall of fame of faith (Heb. 11)!

Yes, when we look at the complete picture, Abraham’s story is defined by his rock-solid faith. However, a closer look shows that he too had a human side.

In Genesis 15 God comes to Abraham with one of the most direct messages in all Scripture: “Abraham, look up. Do you see the stars in the sky?”

“How many are there?”

“That’s how numerous your children will be.”

It’s fair to say that none of us have experienced a promise with such magnitude, delivered straight from the mouth of God. Yet at the beginning of the next chapter we find Abraham exhausted by fear that God would renege on His promise. Through the urging of his wife, Abraham stops waiting on God and takes matters into his own hands.

Abraham’s role in this part of the story often goes untold. Sure, it was Sarah’s idea, but Abraham went along with it—an indication that doubt was beginning to slip in. Imagine, the father of faith faltering and failing to remember that God doesn’t break His promises.

Just a few chapters later history repeats itself. Despite being the younger brother, Jacob is hand-chosen by God to receive his family’s birthright. But when it seemed as if God wasn’t going to come through, Jacob decided it was time to act.

Sometimes, like Abraham and Jacob, I try to help God. I try to fight my way out of temptation, create a better situation for myself, and stay in total control of my life. I try to win the battle, instead of surrendering and allowing God to fight for me.

Every day we have a choice to make. We can choose to micromanage every aspect of our lives, or we can choose to wait on God and have confidence that He’s going to follow through on what He’s already promised.

You probably won’t find that one on the Internet, but it isn’t a bad way to start the new year.

__________
Jimmy Phillips ([email protected]) writes from Bakersfield, California, where he is electronic media coordinator for San Joaquin Community Hospital. Visit his Web site at www.introducingthewhy.com. This article was published January 12, 2012.