Super-gifts and the Christmas Spirit 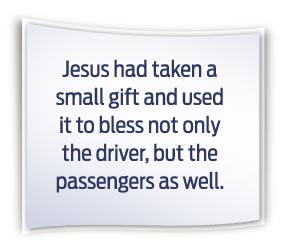 Andrew McChesneyYolanda, a beefy driver with long, dark hair, picked up the microphone as the Greyhound bus swung out of the Seattle bus station. “Welcome aboard,” she said, rattling off information about the journey. “But beware,” she added at the end. “If a person smokes or uses illegal drugs on this bus, federal law requires me to stop and turn that person in to the police.”

The people crammed into the bus ignored Yolanda, chatting on cell phones, listening to music, or dozing.

A canceled Christmas flight from Russia to Washington State had prompted the unexpected ride. But I liked Yolanda. As I stood in line outside the bus station, perplexed about a ticket problem, she had gone above the call of duty by disappearing with my ticket and returning with an explanation.

At the first stop of the five-hour trip I bought breakfast for myself, and a sandwich, three cookies, and fruit juice for Yolanda. I planned to present her with the food and say thank you. But when I entered the bus, Yolanda was nowhere in sight. So I placed the gift on the driver’s seat and sat down.

As I waited, doubts began to creep up. What if Yolanda didn’t like vegetarian sandwiches? What if she was suspicious of food from strangers?

When Yolanda finally returned, I had worked myself into such a frenzy of doubt that I crouched down in my seat out of sight. I prayed that she would accept the gift in the spirit that I had intended.

After a moment I heard a surprised sputtering. “The passengers on my bus love me!” Yolanda exclaimed. As we pulled out of the parking lot, Yolanda sipped the fruit juice and munched on a cookie. Then she picked up her microphone. “Thank you so much, all of you, for the food left on my seat.”

The atmosphere in the bus changed noticeably. Earphones disappeared, cell phones were put away, and people began to smile and chat with each other. Being driven by a happy driver was infectious.

With humility, I realized that I had presented a super-gift. Jesus had taken a small gift and used it to bless not only the driver, but the passengers as well.

A month earlier, during a Thanksgiving visit home, a man of about 70 waved over my mother and me as we walked into a restaurant. Gesturing to his dining companion, he said, “This is my bride. We just got married yesterday.”

The news was too good to go unnoticed. After my mother and I were seated, we whispered to the server that we wanted to give the couple an anonymous wedding gift—a pie of their choice.

We watched the server announce the gift to the astonished couple. She said a little bird had told her about the wedding. They asked whether it was a lovebird. Later we saw the couple leaving, the man clasping a take-out box in one hand and his wife’s hand in the other.

When I asked for the bill, the server pointed to a $6 item marked “miscellaneous.” She said that was a pumpkin pie. I wondered if there had been a mistake. Had the server given the couple a slice of pie rather than a whole pie? I asked the cashier how much a pie cost. She assured me that the couple had received a whole pie and that the pie had cost us $6.

My mother and I wanted to brighten the newlyweds’ day. But our desire had proved contagious, and the restaurant staff had chipped in to pay for part of the pie.

When Jesus walked the earth, He gave continuously, but never gifts that benefited only a single recipient. When a little boy offered five loaves and two fish, Jesus fed a crowd. When Jesus healed a paralytic, his health was restored, his sins were forgiven, and everyone who witnessed the miracle was blessed—even we who read it today.

Jesus is the biggest Super-gift of all, given by God Himself: “For God so loved the world that he gave his one and only Son, that whoever believes in him shall not perish but have eternal life” (John 3:16).

With Jesus as our example, let’s resolve to make every gift a super-gift.