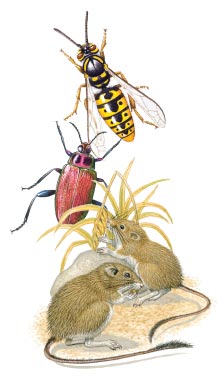 Lael CaesarBefore the beginning God was already there. Hence the Bible’s authoritative introduction: “In the beginning God created the heavens and the earth” (Gen. 1:1).* “All things were made by him” (John 1:3, KJV), things “in heaven and on earth, visible and invisible, whether thrones, or powers or rulers or authorities” (Col. 1:16). “All things came into being through Him, and apart from Him nothing came into being that has come into being” (John 1:3, NASB). Whether they be homely or beautiful, great or small, common or wonderful, He precedes them all.

Things both changed and did not change when genesis came. Things changed because now there were things. They did not change because it was only their beginning, their genesis. Genesis, of course, is how things come to be. It is God’s great gift of beginning. It is not automatic. Birds do not first swim, and fish do not first fly by fluke. They must first receive the gift of genesis.

And genesis doesn’t happen spontaneously, although ancient and modern wise men and women have been willing to clamor on behalf of the claim, discussing it under the awkward and sophisticated name abiogenesis, which basically signifies life from nonlife.

Alexander Ross, seventeenth-century defender of absurd orthodoxies, contended that beetles and wasps issue from cow’s dung, and mice and a variety of other creatures spring from putrefied matter. “To question this is to question Reason, Sense, and Experience, ” Ross insisted. “If [anyone] doubts of this, let him go to Ægypt, and there he will finde the fields swarming with mice begot of the mud of Nylus. . . .”†

Oddly enough, many of Ross’s most amused scorners today still hold, like him, that abiogenesis is fact. Though they may question his “reason” and “sense” their faith is as fanciful as they make his out to be. It is not antiquity or modernity that makes us right or wrong.

With regard to Genesis, we will always be wrong if we resolve to explain beginnings apart from the Beginner’s plain word, to rely on our observations rather than on His revelation in Genesis, to inform about genesis on the basis of the findings of the generated. New rhetoric notwithstanding, Ross’s insistence on reason and experience differs not from today’s proponents of life’s descent with modification from the uncreated thing, smaller than a needle’s eye, that exploded billions of years ago, giving rise to zircons, apes, and everything in between. Sadly enough, recipients of the gift of genesis now wish to explain it as a natural consequence of all their other gifts. Beginning, they say, depends on ending, survival is by slaughter and exploitation, and life is impossible without death.

Such thinking is, of course, both rash and irrational. The observations it relies on all come after the beginning, as do the observers. Better to listen to the Beginner, rather than dispute His facts based on belated observations. Better to acknowledge the beauty of His order: Because of genesis, He is always there first for us, for as long as we have needed Him, and for as long as we ever will.

What reassuring truth: Before the beginning God was already there!