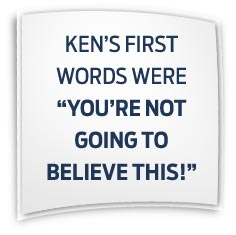 BY LESLIE OLINAs our journey toward pastoral ministry progressed, my thoughts about risk intensified. We felt certain that God was leading our family. But as the day for my husband, Ken, to start classes came ever closer, I began to question if we’d really heard the voice of God after all.

Our house, which we had been in the process of remodeling for several years, was taking longer to complete than we had anticipated. Ken’s classes were to begin in May, and we were hoping to put up a For Sale sign by January 1. New Year’s Day came and went, and we were still feverishly trying to finish a myriad of projects.

February and March passed, then it was the middle of April, and still no For Sale sign graced our front yard. With just three weeks until classes began, I wondered how we would possibly make it financially if we weren’t able to sell the house soon. Continuing to meet our financial obligations without the salary that brought me so much security seemed impossible.

About this time Ken called from work one morning to say that he felt he should go ahead and give his two-week notice. We discussed it for a few minutes, and knowing that the time had come to decide whether we were really going forward, I reluctantly agreed. Barely a half hour later Ken called back. His first words were “You’re not going to believe this!”

After our conversation he had told his immediate boss that he was giving his two-week notice. His company had known for several months that he would be leaving to attend seminary in the spring, so it was no surprise to his boss.

But Ken had barely gotten back to his desk before his manager called him into his office. The manager explained that he knew that Ken was going to be leaving soon and that the company had decided that it had to let some people go. The manager wondered if leaving with a severance package would fit into our time-table. The package would include full pay for several months and insurance benefits for a year. It didn’t take a lot of consideration for Ken to say yes, he was definitely interested in such an arrangement.

The timing astounded us. Was God waiting for us to take that step of faith and move forward with no idea how it would all work out? My faith inched forward. God had taken care of one of my immediate worries about finances. Now we just had to sell the house.

On the Market
We put a For Sale sign in the yard the last week of April. We had a real estate agent appraise the house and give us an idea what to list it for, although we hoped to sell it ourselves to save the agent’s fees. She gave us a figure, but told us that if we received an offer for less, we should take it. We decided to advertise it for a few thousand dollars more than the figure she had suggested.

Later that afternoon the phone rang. A woman had seen our sign and was interested in seeing the house. We were planning an open house, and I encouraged her to come. A few minutes later she called back. She didn’t want to wait for the open house; she wanted to see it sooner. So we set up a time for her to see the house the following afternoon.

She arrived promptly with her daughter. I could tell right away she was interested. But in the back of my mind I knew that this was not our buyer. I had pictured a family enjoying our spacious home—certainly not a retired widow. But she loved the house.

As we talked I realized that she owned a house she had to sell. My hopes fell again—one more reason she was not the right buyer. We needed someone who could close on our property right away. We couldn’t wait for her to sell her house.

As she stood in our kitchen pondering how she might be able to buy our house without first selling her own, I suddenly realized that it was possible we would sell the house that very day! Her daughter tried to tell her to take it slow and not to make any hasty decisions, echoing my own thoughts. This really isn’t the right place for you. It’s too large. The master bedroom is on the second floor. What if you can’t sell your home? There were so many reasons she wasn’t the buyer I had imagined. Nevertheless, she left promising to call her bank and get back to me that afternoon.

She returned within the hour with a check for a deposit and a full-price offer.

Too Good to Be True
It’s hard to describe how I felt that day. This was the kind of story I loved to read, but I never dreamed it would happen to me. Things I thought absolutely impossible were happening right before our eyes.

I enjoyed sharing this story with friends and family who faithfully prayed for us, as well as with our agnostic friend next door who laughed off the severance package as mere coincidence. My husband’s coworkers who couldn’t believe that we sold our house so quickly for the asking price, and the real estate agent who stopped by with the copy of her market analysis was surprised to learn that the house had already sold.

The challenges we faced in our journey into ministry didn’t end there—but neither did the miracles. It seemed that each step of the way, just when it seemed that we would surely have to take a detour—or abandon the journey altogether—everything fell into place and we were able to move forward.

Those experiences have become milestones of faith and hope that I look back on when my faith wavers and I’m tempted to question God’s plan. I know that someday I will stand in awe of how perfect all God’s plans have been for me.

As I’ve thought back about taking risks for God, one thought has pricked at the back of my mind: Is it possible that the risks we take for God aren’t really risks at all? We risk what we see for what we cannot see, which in reality is far more secure than the things we hold on to so tightly. And I wonder: How many blessings have I missed because I was afraid to step into the unknown? Is our faith often weak because we seldom really exercise it?

Is God calling you to take a risk for Him? Can you trust Him even with the things that bring you comfort and security?
I am absolutely convinced that following Jesus is worth the risk!