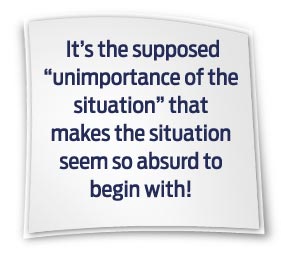 CLIFFORD GOLDSTEINIn The Journal of Philosophy (Vol. 68, No. 20 [Oct. 21, 1971]: 716-727), atheist Thomas Nagel wrote “The Absurd.” Stitching together his words decades ago, when existentialist dread was très chic, Nagel challenged the mantra about the absurdity of human life.

“Most people,” he began, “feel on occasion that life is absurd, and some feel it vividly and continually.” When people were asked why they felt that way, he proclaimed, most explanations were “patently inadequate.”

For instance, some lamented that because nothing that they did now would matter in a million years, life is absurd, meaningless. But Nagel countered that even if what we did mattered in a million years, why would that make life less absurd now than if it didn’t matter then?

Others complained that we were so small in contrast to the universe, and that life was so short in contrast to eternity. He responded: If we were much bigger than we are now, or lived much longer, why would that change anything? “For suppose,” he wrote, “we lived forever; would not a life that is absurd if it lasts 70 years be infinitely absurd if it lasted throughout eternity?”

Philip Larkin, in his poem “Aubade,” catches the unhappy thoughts of a man who wakes up one morning and confronts his mortality: “Unresting death, a whole day nearer now, making all thought impossible but how and where and when I shall myself die.”

Nagel expressed the same dilemma: “In viewing ourselves from the perspective broader than we can occupy in the flesh, we become spectators of our own lives.” He talks about a mouse, and why the life of the mouse isn’t absurd, because the mouse “lacks the capacities for self-consciousness and self-transcendence that would enable him to see that he is only a mouse.” If he had those capacities, then that mouse—unable “to rise above his mousely strivings”—would face the same absurdity as humans, unable to rise above our “humanly strivings.”

Nagel, however, tries to dismiss all the various ways that people have tried to counter this absurdity (defiance, rebellion, pride, heroism). “Such dramatics,” he wrote, “even if carried on in private, betray a failure to appreciate the cosmic unimportance of the situation. If sub specie aeternitatis there is no reason to believe that anything matters, then that doesn’t matter either, and we can approach our absurd lives with irony instead of heroism or despair.”

Sounds nice. But to tell us that sub specie aeternitatis not only do we not matter, but that our angst over our not mattering is unimportant, is like telling a person with sensitive nerves in his or her fingers that the hammer smashing those fingers is as unimportant as the pain caused by the hammering. It’s the supposed “unimportance of the situation” that makes the situation seem so absurd to begin with!

As an atheist, though, Nagel had what? He turned to, of all things, “irony” (irony?)—as if the irony of our situation solved the dilemma of its absurdity. An ironic life is, I suppose, better than an absurd one, though I’m not quite sure that solves anything.

The only way out, of course, is up—to God, to Jesus, to the promise of eternal life in a world made new, with none of the things that make this existence so short, so miserable, and, hence, so absurd.

“ ‘[God] will wipe away every tear from their eyes. There will be no more death’ or mourning or crying or pain, for the old order of things has passed away” (Rev. 21:4).

Talk about a view sub specie aeternitatis. And seen through the lens of faith, that view is much prettier than the one Nagel threaded together in volume 68, number 20, pages 716-727.