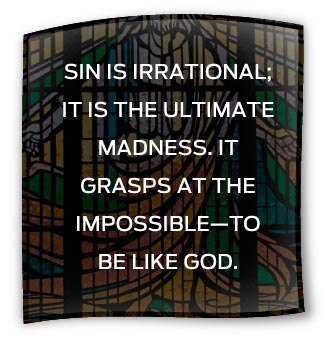 BY WILLIAM G. JOHNSSONOur salvation comes from a God who loves us so much that He spares no effort to win us back to Himself. The account of His saving activity in the struggle between good and evil is the greatest story ever told; it is indeed the drama of the ages.

In this story two gardens set the stage for crucial developments. From the first garden come sin, loss, shame, and death. From the second flow hope, joy, and life.

God planted the first garden. It was beautiful, it was perfect, it was Eden. And in this flawless environment God placed the first humans, also made by His own hand (Gen. 2:8, 9), and communed with them. Eden was Paradise, the Paradise of innocence. Adam and Eve were sinless, but they were like children. They had not yet developed characters: they had not made choices. And choices would soon be placed before them.

The Entrance of Evil
Behind the tranquillity of the garden lurked a sinister figure. Evil, something altogether outside Adam’s and Eve’s experience, was not far away—it never is! A fallen angel, once known as Lucifer the daystar but now as Satan the deceiver, awaited his opportunity.

How long our first parents lived in the garden we do not know. But one day a shadow fell over Paradise. Satan, using the medium of the beautiful serpent, dangled before them the allure of a new experience that would make them like God Himself.

God had instituted a simple test of obedience: “You are free to eat from any tree in the garden; but you must not eat from the tree of the knowledge of good and evil, for when you eat of it you will surely die” (Gen. 2:16, 17). But the serpent said: “You will not surely die . . . for God knows that when you eat of it your eyes will be opened, and you will be ?like God, knowing good and evil” (Gen. 3:4, 5).

Many years have passed, but the tempter still comes to people today in the same way. He glamorizes disobedience, making it seem attractive. He paints adherence to God’s commands as boring. He promises thrills, new experiences. He covers up the path of ruin that he invites us to enter upon—a path littered with drunkards in the gutter and bodies wasting away.

Always the devil seeks to insert doubt. He attributes to God his own character and pretends to take the true character of God. God wants only what is best for us; He withholds nothing from us that leads to health and happiness. Satan, on the other hand, offers us a poison package that looks attractive but ultimately degrades and corrupts us.

Satan is “a liar and the father of lies” (John 8:44). “You will not surely die,” he persuaded Adam and Eve. But it was a big lie. They did die, and their offspring have been dying ever since.

Only God can be God. He is the Creator of all, whether angels or humans. The creature can never become Creator. God made men and women in His image to live in Him and render loving obedience. Only in God do we find our true selves. “Thou hast made us for Thyself, O Lord, and our hearts are restless until they find their rest in Thee,” as Augustine well expressed.

Sin is irrational; it is the ultimate madness. It grasps at the impossible—to be like God. It casts aside the fact of our existence as being made by God and dependent upon Him for our every breath.

Yet how many men and women today follow in the steps of our first parents! The great majority of people succumb to the tempter’s enticement “You will be like God” by putting God out of their thinking, denying that He exists, or rejecting Him outright.

Results of the Fall
The consequences of the Fall began to be manifest almost immediately. After the initial rush of pleasure, our first parents began to feel shame (Gen. 3:7). Hearing God approaching in the garden, they were seized by feelings of guilt and tried to hide (verse 8). But they could not hide from God, any more than we can hide today. They began to blame each other for their disobedience: “The woman you put here with me—she gave me some fruit from the tree, and I ate it,” Adam whined (verse 12).

Does it sound familiar? Blame anyone, blame even God, but don’t admit your own fault. Likewise with Eve: “The serpent deceived me, and I ate,” she tried to defend herself (verse 13).

These attempts to put the blame somewhere else and to justify their actions were as flimsy as the garments of fig leaves they had sewn to cover their nakedness. And still today fig-leaf excuses and self-justification abound.

Then the Lord sketched the future that lay before them. They would be banished from Paradise to a life of painful toil. Henceforth nature would produce thorns and thistles. Eve would give birth to children in pain and at last, after a lifetime of struggle to win their daily bread by the sweat of their brow, they would return to the dust from which God had formed them (verses 16-20).

The poet John Milton, at the close of his epic work Paradise Lost, movingly described their final moments in Eden:

“The world was all before them, where to choose
Their place of rest, and Providence ?
their guide:
They, hand in hand, with wandering ?
steps and slow,?
Through Eden took their solitary way.”

God to the Rescue
But God didn’t leave Adam and Eve without hope. Although banished from the garden, they were not banished from His presence. Wherever their new life would take them, God would be there.

Further, God left them a promise for the future. While they were still in the garden He had declared to the serpent: “I will put enmity between you and the woman, and between your offspring and hers; he will crush your head, and you will strike his heel” (verse 15).

This “enmity” is not a natural human reaction. It is something put within us by God; it is grace at work.

Wrote Ellen White: “It is the grace that Christ implants in the soul which creates in man enmity against Satan. Without this converting grace and renewing power, man would continue the captive of Satan, a servant ever ready to do his bidding. But the new principle in the soul creates conflict where hitherto had been peace. The power which Christ imparts enables man to resist the tyrant and usurper. Whoever is seen to abhor sin instead of loving it, whoever resists and conquers those passions that have held sway within, displays the operation of a principle wholly from above” (The Great Controversy, p. 506).

The work of grace came to a climax in the Offspring of the woman—Jesus Christ. At the conclusion of His sinless life and loving ministry, He went to a garden to pray—the Garden of Gethsemane.

This garden was planted by man, not God. It was a favorite place of retreat for the Master. On the final Thursday night of His earthly life, with the cross staring Him in the face, Jesus went there to wrestle with the Father.

As the weight of the sins of the world pressed heavy upon Him, Jesus implored: “My Father, if it is possible, may this cup be taken from me. Yet not as I will, but as you will” (Matt. 26:39). “And being in anguish, he prayed more earnestly, and his sweat was like drops of blood falling to the ground” (Luke 22:44).

In that garden the destiny of the human race hung in the balance. Jesus craved the support of His closest friends, but they all fell asleep. He drank the cup of woe alone. Another being was there, the same deceiver who had been in Eden. Now He tempted Jesus to abandon His mission to save the world: They aren’t worth it. None of them care. Look at them?—all sleeping!

Unlike our first parents, Jesus refused to listen to the malevolent voice, refused to entertain doubt. Accepting the bitter cup from His Father’s hand, He went forward to Calvary.

The two gardens call us to prayerful contemplation of the price of our salvation. There we see how much was lost, but also how great is the grace of our wonderful Lord. Ellen White urges us to carefully study and compare “the Garden of Eden with its foul blot of disobedience . . . with the Garden of Gethsemane, where the world’s Redeemer suffered superhuman agony when the sins of the whole world were rolled upon Him” (manuscript 1, 1892).

Hallelujah! What a Savior!

________________
Unless otherwise indicated, all the readings for this year’s Week of Prayer were written by William G. Johnsson, Ph.D., longtime editor of the Adventist Review and Adventist World magazines. In retirement he works as a Presidential assistant for Interfaith Relations at the General Conference. This was published September 22, 2011.