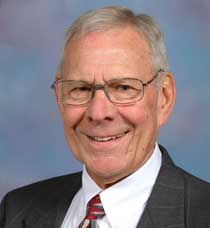 John Wagner, administrative pastor of the Sligo Seventh-day Adventist Church in Takoma Park, Md., has been asked by the Union College Board of Trustees to return to Union for a third time to serve as interim president. He first served as academic dean from 1980 to 1983, and then as president from 1986 to 1991.

Wagner will fill the position left vacant when David Smith left the school at the end of June to become the senior pastor of the Collegedale Seventh-day Adventist Church in Tennessee. Wagner will serve during the 2011-2012 school year, until a permanent replacement is found.

“The opportunity to return to Union College after two decades fills me with eager anticipation,” said Wagner. “Union College has had two outstanding and committed presidents—both valued friends—since I left. My hope and prayer is that the good things accomplished and planned for by [past presidents] John Kerbs and David Smith will continue to mature, so Union's mission-fulfillment will not miss a beat before a permanent president is installed.”

When Wagner was appointed president in 1986, he faced a significant challenge in the form of $8.9 million in college debt. But through his leadership and the generosity of alumni, friends and employees, Union cut the debt in half during Wagner’s tenure.  During his time at Union, Wagner experienced the same spirit seen in students and employees 20 years later.

“I especially appreciated the ‘spirit’ on campus where unity of faculty, staff and students contributed toward spiritual and academic excellence in spite of the extremely tight financial circumstances during the five years I was privileged to serve as president,” Wagner said.

“Dr. Wagner’s extensive leadership experience and his time at Union will give him the background to effectively lead Union College forward while the board of trustees continues to look for a president,” said Tom Lemon, chairman of the college's board of trustees and president of the Seventh-day Adventist Church’s Mid-America Union, which owns the school. “We are thankful for his willingness to help lead Union College one more time.”

Wagner assumed his responsibilities at Union on August 1 while the Union College Board of Trustees and the appointed search committee continues to seek a permanent presidential candidate.