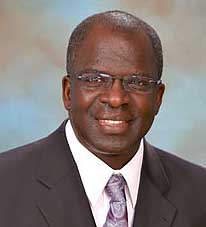 Diop, originally from Senegal, takes up his responsibilities in August as the associate director of the General Conference Public Affairs and Religious Liberty Department (PARL), where he will represent the church at the United Nations in Geneva and in New York. He will also contribute to PARL's work with the International Religious Liberty Association.

Diop is an academic, administrator, and a musician who has lived and worked on three continents. He replaces Barry Bussey, who served in the position since 2008 and left earlier this year to take a position in his native Canada.

Diop holds a master's degree in philology and a doctorate in Old Testament studies. In 2008, he told Adventist News Network he's comfortable conversing in 10 languages.

An important focus of his new role will be to "make the case before representatives of nations that they benefit from having Adventists live in their countries, freely practicing their religion and lifestyle," Diop said.

"Our various services to humanity--healthcare systems, education institutions, organizations for the support of human rights, development and relief agencies--all these things are focused on improving the quality of life within communities," he said.

Diop said he will draw principles to guide his work from the life and example of Jesus Christ: "Jesus showed through His life and teachings that he was certainly a diplomat," he said. "He did not, for example, force Himself on humanity, but through appeals, dialogues, conversations, negotiations, based on respect for human dignity, He shared His values. He appealed to the deepest values he inscribed in people he created in His own image."

General Conference vice president Delbert Baker, who serves as an adviser to the PARL department, says Diop will bring a unique line-up of abilities to his role as an international church diplomat. "He brings a deep commitment to his faith and a wealth of experience to this pivotal role of spokesperson for the church within the international arena," Baker said.