Finding God in the Smog 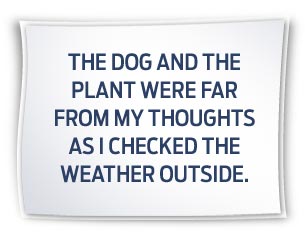 Andrew McChesneyThe mutt stood silently as I walked by on my way to work. I had seen it wandering the neighborhood many times; but this time the dog struck me as almost comical, its long snout and bony legs protruding from an exploding bush of reddish-brown fur. Then I realized I was looking at not a dog but a bird.

For months I had longed for nature, musing that if I lived away from the big city I would see God more clearly. My discontentment originated in DVD presentations by Adventist speaker Jim Hohnberger about how he moved to the mountains to find God. Writer Ellen White supported rural life. And Jesus seemed to root many of His stories in nature.

But I was trapped in a monstrous metropolis of asphalt, dirt, and so much air pollution that scientists say living here for more than five years can shave months off your life. I’d pack my bags in a heartbeat, but God wasn’t calling me to leave Moscow. So I pleaded: “Reveal Yourself to me in this city.”

As the days passed, I began seeing God elsewhere in Moscow. I even recognized His power in the dead plant on my kitchen windowsill. Remembering that my mother had nursed another neglected plant back to health during a weeklong visit, I poured water on the parched dirt for several weeks. The plant’s dry brown of death slowly transformed into the vibrant green of life.

That incident reminded me of Ellen White’s statement: “Satan cannot hold the dead in his grasp when the Son of God bids them live. He cannot hold in spiritual death one soul who in faith receives Christ’s word of power. God is saying to all who are dead in sin, ‘Awake thou that sleepest, and arise from the dead.’ Eph. 5:14” (The Desire of Ages, p. 320).

The dog and the plant were far from my thoughts as I checked the weather outside. Dark-gray clouds choked the sky. It looked like rain, but the street remained dry. I groaned at the thought of lugging my enormous black-and-white umbrella to the office and then not needing it. I decided to risk going without it.

Sheets of rain pummeled the bus as I rode to the subway. Grimacing, I wondered whether it made sense to pray for the rain to stop. After the subway I still faced a 15-minute walk to the office. I thought, What a silly prayer. I could have just taken my umbrella.

The rain had eased to a drizzle by the time I started the brisk walk to the office. Jesus’ words sprang to mind: “When you see a cloud rising in the west, immediately you say, ‘It’s going to rain,’ and it does. And when the south wind blows, you say, ‘It’s going to be hot,’ and it is. Hypocrites! You know how to interpret the appearance of the earth and the sky. How is it that you don’t know how to interpret this present time?” (Luke 12:54-56).

Indeed, the Bible is filled with clear reminders—such as Moscow’s dark storm clouds—that we are living at the end of earth’s history. It should come as no surprise when Jesus—like the rain—actually comes. We have no excuse to be unprepared.

God said, “You will seek me and find me when you seek me with all your heart” (Jer. 29:13). That applies even to city dwellers who neglect their umbrellas.