What's to Believe About the Bible? 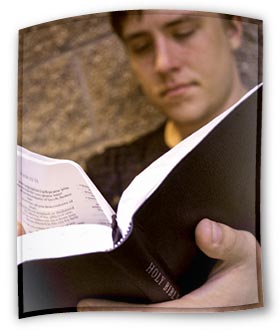 BY CLINTON WAHLENAuthority” is a bad word for some—especially top-down authority, the kind the Bible is seen to represent. As good postmodernists say: “The Bible may be your authority, but it isn’t mine.” The source of authority for these thinkers is not top-down—it is simply themselves. Not that they oppose religion. “Postmodernists aren’t against religion. They are only against religious teaching that holds to objective truth and the usefulness of reason.”1

Pilate’s question is still heard on many lips today: “What is truth?” he asked, and walked away without ever waiting for an answer (John 18:38). Had he tarried, he might have been drawn into an insightful dialogue. For that is God’s way. “Come now, let us reason together,” God invites (Isa. 1:18, RSV).2

That invitation suggests that biblical authority is a rational proposition, inviting valid questions: (1) What is the nature and source of biblical authority? (2) What internal evidence, if any, does Scripture give for its claims to divine origin and authority? (3) What about corroborating external evidence? (4) How does Scripture’s authority relate to church authority and tradition? After looking at each of these questions we shall draw some conclusions.3

The Nature and Source of Biblical Authority
The Bible, in both Old and New Testaments, claims to be God’s revelation, and therefore, divinely authoritative. The Bible’s God “is not only the God who acts, but he is also the God who speaks.”4 The Old Testament expresses this claim to authority hundreds of times through the affirmation “Thus says Yhwh” or its equivalent.5 God is a God of truth (Isa. 65:16), literally, the God of “Amen.” He speaks the truth and does not lie. God’s truth endures forever because, like him, it is absolute and unchanging (Ps. 117:2). God’s truth is also universal—the same across time and culture.

The first occurrence of the word “authority” (Greek, exousia) in Matthew is instructive for defining biblical authority. It occurs at the end of the Sermon on the Mount with a parable emphasizing the importance of hearing and obeying Jesus’ words (Matt. 7:24-27). Both there as well as in Mark (1:22), Jesus’audience concludes that His authority is superior to that of the scribes. Their admiration in Mark follows Jesus’ visit to the synagogue in Capernaum and His healing of a demon-possessed man (verses 21-28). Thus, people recognized Jesus’ authority based both on what He said and what He did. What Jesus did, reinforced the truth of what He said. His word contained such power that even demons obeyed Him (verses 25, 26).

He was clearly different from other contemporary teachers. While they derived their authority from the biblical writings, Jesus expressed an authority superior to Moses and the letter of the law (Matt. 5:21-48). His acts underscored His divine authority. In casting out demons He did not use divine names or formulas; His power was in Himself.6

When scribes and Pharisees attributed His power over demons to Satan, Jesus replied that His power is the power of God (Matt. 12:22-30). And Scripture’s divine authority is backed by that same authoritative affirmation. Speaking to forlorn disciples on the Emmaus road, He appealed, not to His own personal authority nor to His miraculous resurrection, but to the truth of God’s Word, explaining how His life, death, and resurrection were but fulfillment of biblical predictions (Luke 24:13-27, 30-32, 44). To questioning Jews He answered from the Scriptures (e.g., Mark 12:18-34), affirming that “the Scripture cannot be broken” (John 10:35, NKJV).7

Internal Evidence of the Bible’s Authority. Two major reasons for believing in God and His Word are Creation and prophecy. Regarding Creation, He has no equal (see Isa. 40:25). None of the many ancient stories about Creation compares to His simple, elegant reporting of His one-week miracle in Genesis 1 and 2.

Again, regarding prophecy, no one matches His ability to declare “the end from the beginning” (Isa. 46:10, NKJV). An abundance of fulfilled prophecies confirms His claim. One well-known example is Daniel 2, with its forecast of world empires given in terms of a statue of various metals. Writing during the sixth century B.C., Daniel accurately described the succession of kingdoms whose rule most directly affected Israel, beginning with Babylon, followed by Medo-Persia, Greece, Rome, and the divided nations of Western Europe, concluding with the establishment of God’s kingdom. That kingdom is represented by a mighty and mysterious stone that topples the statue and fills the whole earth.

In another prophecy Daniel predicted another destruction of the city of Jerusalem and the Temple after Messiah’s death and the end of the 70 weeks of years (Dan. 9:24-27). Micah’s prophecy of the Messiah’s birth in Bethlehem (Micah 5:2) was also remarkably fulfilled (Matt. 2:5, 6). Thus, Jesus could speak of prophecy’s inviolability (Luke 24:26, 44), and Peter could consider its fulfillment as more convincing than miracles and eyewitness experiences (2 Peter 1:16-21).

A third reason for accepting the Bible’s divine authority is its theological consistency. Although written over a period of about 1,500 years by nearly 40 different authors, the Bible’s amazing harmony permitted Jesus to show two discouraged travelers “in all the Scriptures the things concerning Himself” (Luke 24:27, NKJV). Paul also, by his multiple quotations from various Old Testament books, emphasizes both Scripture’s consistency and its uniform authority, despite the varied personality and individuality of its many writers (Rom. 3:10-19).

The Bible’s eyewitness testimony is itself a double basis for respecting its authority. For one thing it is written by people who experienced God’s revelation. As John explained, “We saw. . . and testify . . . and proclaim . . . the eternal life which was with the Father and was made manifest to us” (1 John 1:1).

At the same time it testifies to God’s selection process. The speakers are God’s chosen spokespersons. Their word validates them even as God validates Himself and His Word through them.

External Evidence of the Bible’s Authority. The story of the Bible’s preservation and transmission provides strong evidence for its divine authority. The Masoretic Text (MT) of the Isaiah scroll shows very little difference from that of one of its Qumran counterparts, though a thousand years and much space separate the two. Similarly for the New Testament, its more than 5,000 Greek manuscripts show that differences among them stem mostly from spelling or grammatical slips of the pen rather than from theological tampering. This according to Paul (1 Thess. 2:13), is because of its divine source and its power to change human lives.

The Bible has survived the assaults of the Medieval church, the French Revolution, Communist regimes, and scholarly cynicism. Archaeological success today often goes a long way toward strengthening faith in its supernatural identity. Consider these examples:

The Merenptah Stele, thirteenth century B.C., refers to the people of Israel; the Tel Dan Stele, eighth to ninth century B.C., refers to the Davidic dynasty; the Babylonian Chronicles corroborates Nebuchadnezzar’s activities detailed in 2 Kings 24:10-17; the Pontius Pilate Inscription names the first-century governor; Herodian sites attest to Herod the Great and his palaces. There are also the so-called Peter’s house and the Caiaphas ossuary.

The Bible and Church Tradition
The authority of Scripture in relation to various sources of religious tradition has been understood in a number of different ways over the course of Christian history.9 But according to Scripture itself, divinely revealed, biblical tradition stands above all the rest, whether ecclesiastical, scientific, or otherwise. As Peter and his companions put it to the Sanhedrin, bastions of the religious tradition of their time: “We ought to obey God rather than men” (Acts 5:29, NKJV).

While the Bible is not a textbook of science or history, rightly understood, these all agree with each other. Scripture’s historical and scientific statements, as divinely accredited, hold their own even when in apparent conflict with secular scholarship. God’s Word speaks not just to some, but to all human undertakings. It is our only creed, and, as faithful students of the Word, we continue to be open to new understandings of God’s will for us therein revealed.

Conclusion
The Bible’s authority is grounded in its origin as a revelation from God to human beings. At the same time, as free moral agents we are not compelled to accept this authority but are free to reject it and put another authority in its place if we so choose. We are expected to accept the authority of the Bible, not on blind faith, but rather on the weight of reasonable evidence. By the testimony of Creation, by the reliability of prophecy, by the miracle of its preservation and transmission, and by the corroboration of its accuracy through external sources, God has given us more than adequate evidence, both internal and external, to support our faith in Scripture as God’s inspired and authoritative Word.

That word stands above and independent of organized ecclesiastical authorities because it is a revelation of God Himself. In obeying its precepts we obey the God who is the author and revealer of those principles, and grant to His words and to His person the respect their transcendent authority deserves.

____________
Clinton Wahlen is an associate director of the Biblical Research Institute of the General Conference. This article was published August 25, 2011.